Hi everyone – greetings from back in Rome! 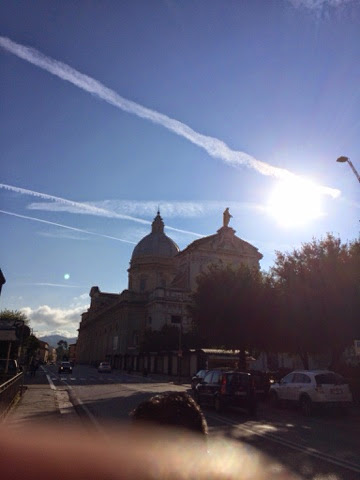 Today started out with a final Mass in Assisi at the Basilica of Santa Maria degli Angeli (St. Mary of the Angels) which is a Church within a Church.  The little Church is called the Porziuncola – it is the most sacred place for the Franciscans – because it was here that  Francis came to fully recognize his vocation (that he began to understand at the Church of San Damiano) – and renounced everything to radically live the Gospel mandates.  It was also here that Francis entered into eternal life.

Having the opportunity to celebrate Mass here is probably going to be hard to top – for reasons that I need a lot more time to pray and reflect over – St. Francis has figured quite prominently in my own personal spiritual life for over 18 years.  Having the opportunity to pray in these sacred places that I’ve read about over and over (in St. Bonaventures Life of Francis) is beyond… at least right now. 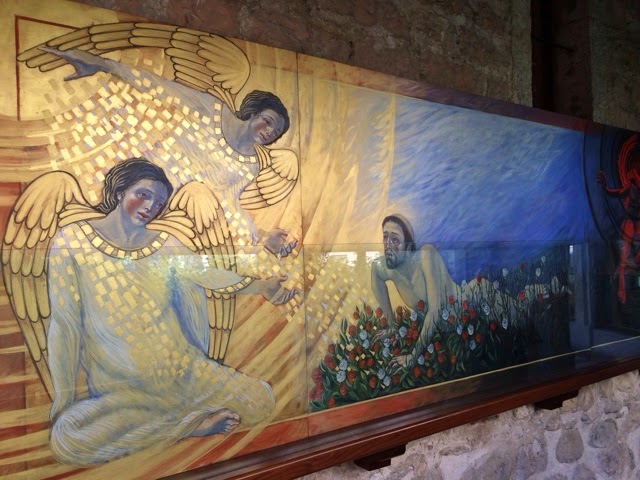 After Mass, we headed back to Rome.  It’s about a 2 and a half hour ride.  It was nice taking  in the Italian countryside.  Thanks to some spectacular weather (the fears over the extreme heat and humidity have thankfully only really bothered us the first few days and have really mellowed out nicely)  it was a nice ride back.
Then — we were off – to St. Paul’s outside the Walls (where St. Paul is burried) 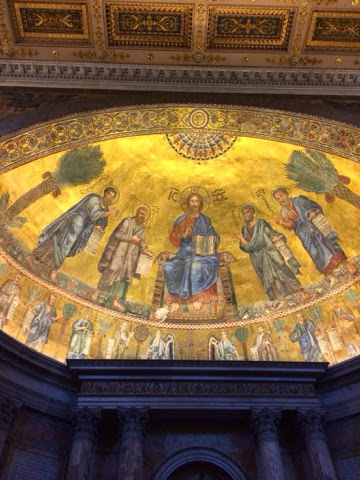 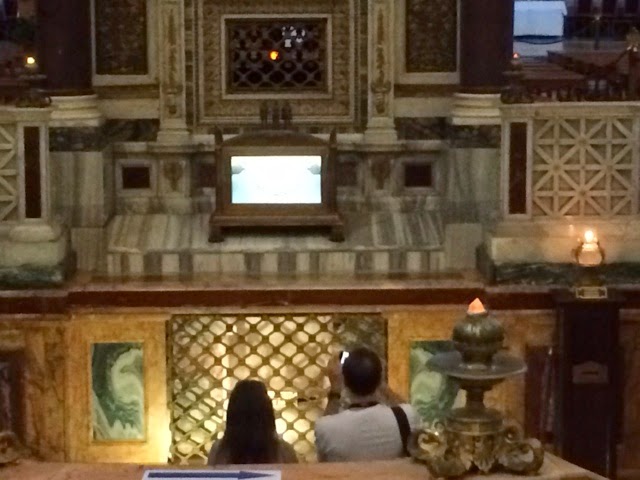 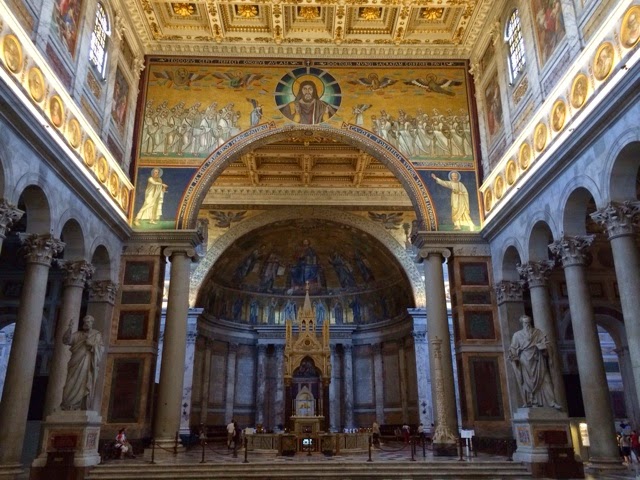 Santa Sabina — one of the oldest Churches in Rome (from the 400’s) which has this breathtaking sight nearby: 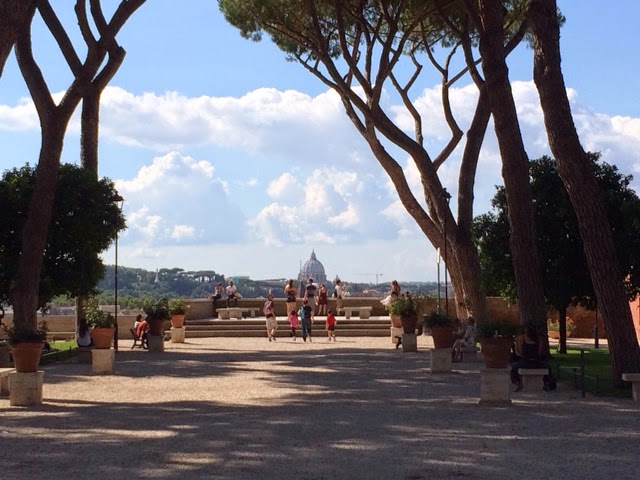 Then to the Church of the Gesu – where St. Ignatius of Loyola is burried – where there’s a fantastic “telling” of the story of his life and death revealing this beautiful statue: 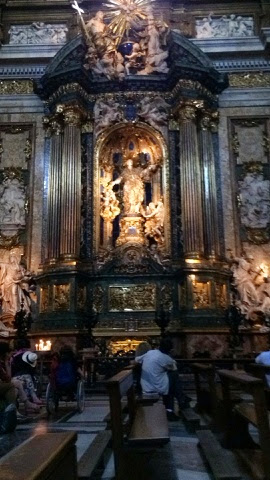 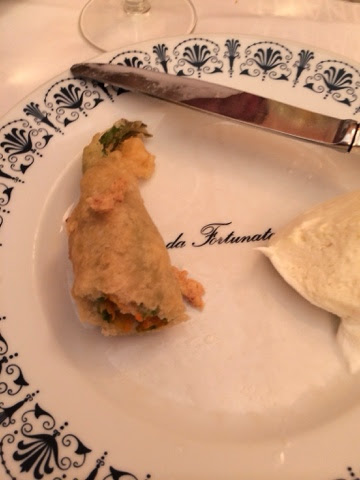 It’s really all too much to take in.  Really thankful and blessed that Lino Rulli invites me to come along on this pilgrimage and to have this tremendous opprotunity with some great folks.
Here’s my homily for today’s Mass at Santa Maria degli Angeli.  The readings: http://usccb.org/bible/readings/072314.cfm 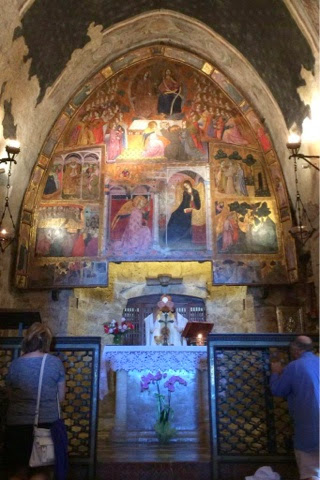 The first reading today is some of the most reflective passages in the entire Old Testament.

The Prophet Jeremiah is a young man who is called by God to deliver some tough love to the Jewish people. People didn’t like hearing bad news then anymore than they like it today. So it’s no wonder that Jeremiah – he’s a little anxious about it… doubting, worried about it all. And what does the Lord say to Him –

Before I formed you in the womb, I knew you

before you were born I dedicated you…

Even with those comforting assurances, the young Jeremiah quickly counters – BUT BUT BUT – I know not how to speak, I am too young…. And lovingly, the Lord answers – say not “I’m too young” have no fear – I am with you…see I place my word in your mouth.

We can get caught up in the heroics of all the Saints we’ve remembered thus far – especially as we’ve visited some amazingly beautiful places. They kind of keep us focused on the victory of their missions and sacrifices. For example, as we head back to Rome today and will see St. Paul’s tomb and St. Peter’s tomb – we can be  struck by the beauty of those places marking those events.  We’re not there to witness the abject fear Paul must have faced as a blade is prepared to strike him severing his head or the Cross that awaited Peter.  Or, we visit this amazing town of Assisi- again struck by an air of holiness & beauty – we’re not witnesses to the many doubts, trials, struggles that Francis, Claire and their followers had to endure — families furiously, angrily enraged at them trying to drag them back home; locking Francis in what looked like a closet — the fury of the world as they went against what was common, what the world was speaking at that time and instead following what the Lord was calling them to do.

Which is why the words of the prophet are a gentle reminder to each one of us. That as we come closer to Jesus Christ through these visits on this pilgrimage, as we recognize stirrings in our hearts that might seem new and different – possibly even insane and impossible – when we recognize a Call into relationship with Him, He never abandons us. He doesn’t give us an “impossible mission” slapping us on the back, throwing us out of an airplane without a parachute saying “good luck.”

He calls us into relationship with Him. And what we find is that as we remain faithful to the tasks he puts before us, we find strength, we find patience, we find endurance, we find faith – we never knew we had.