Latest News
Home /Blog/Instead of WALKING DEAD, WALKING WITH THE RISEN ONE

Hi everyone, here’s my homily for the THIRD SUNDAY OF EASTER- MAY 4, 2014.  The readings for today can be found at:  http://usccb.org/bible/readings/050414.cfm .  As always thanks for reading, sharing the blog on redditt, Twitter and Facebook and all your feedback and comments.  I’m most grateful that the Lord is able to use me and this blog for His glory.  God Bless, Fr. Jim 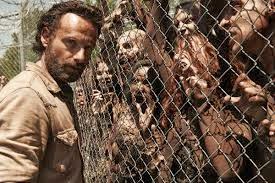 On Ash Wednesday I shared how I got sucked into the Cable TV drama Breaking Bad.  Not sure what to make of the fact that 40 + days later I’ve caught up with the first 3 seasons of AMC’s The Walking Dead.

Not exactly a Lenten thing that I was hoping to finish in time for Easter (for the record, I watch these things on my nearly daily runs on the treadmill as a way to make the time go by, lest you think I sit in my room all day watching Netflix).

Similarly to Breaking Bad though we have a show that has caught the collective fascination of a substantially large audience.

The premise The Walking Dead is that some plague has consumed the earth – virtually wiping out all of humanity except for a small group of people whom the show follows (for some reason, animals seem spared from this virus). Oh, and there’s one other thing. The dead people have “resurrected” – but as Zombies.  Looking to devour the flesh of the healthy remaining humans.
Yeah.
Similar to my confession back on Ash Wednesday, there’s a part of me that is repulsed by the show – lots and lots of violence and gore, so again, I’m not making this a “Fr. Jim recommended thing”- (if anything this is one of the consequences I suffer from being on a college campus for 7 years is hearing “You have to watch it” because now there’s a curiosity about how the drama will resolve itself; not to mention some interesting moral questions that arise along the way) that have me hooked.

But I couldn’t help but notice that again – some of the things that make up our popular “entertainment” reveals something about ourselves. So do shows like The Walking Dead reveal a hopelessness that’s many people relate to?  That death is this horrifying thing coming after you. That you have to do all you can for as long as you can with as much strength as you can to fight death – with the reality that ultimately, you will lose. The best you can do is stave it off.

Because truth be told, we can see how our society and our culture is shifting towards a Post-Christian mentality (one recent study said the fastest growing “religious group” in the U.S. is those who hold no religious view at all).  So while the ridiculousness of a “Zombie apocalypse” is an obvious extreme example that few would believe possible – I do think there’s a growing number of people who would argue that what we Christians hold as truth about what happens after death – of Heaven and Hell, of an after life – is just as ridiculous.

And so the response to the inevitability of death is met with a variety of different responses.

– You can see that some try to drown or numb the hopelessness they see life as with drugs or alcohol or some other addiction.

– Some try to ignore the reality the best they can.

– A few hope that they can do something so memorable that history will remember them.

– Others attempt to embrace some form of Buddhism or philosophical thought, seeing life as simply an illusion and get some sense of peace with all that.

Even Christians, in the face of death, find it hard to believe the promises of Jesus. That’s why this Gospel reading is such an important reading – and one of my favorites of the Easter Season. Look at the timeline of events we just heard.  These two disciples – Cleopas and the other guy – they are walking out of town.  They’re overwhelmed in their grief at the crucifixion at the death of Jesus.  They’re consumed with fear at the horror of what they witnessed to the man they knew, the man they loved, the man they followed. But what’s always struck me – as this mysterious figure joins them, prods them in conversation as they walk along – they are also consumed with doubt. In fact, instead of Thomas being called the “doubting” one – these two Cleopas and the other guy – are the doubters.  Thomas expressed his doubt at the news of the resurrection, but stayed with the community of apostles.

These two confess – to Jesus himself, who, because they are so filled with doubt, fear and grief don’t even recognize him, think of him as some stranger, who they spontaneously share all their pain with him — they confess, they tell him that they’ve heard news from several witnesses that Jesus has risen from the dead – first the women and then some others.  And what is their reaction? 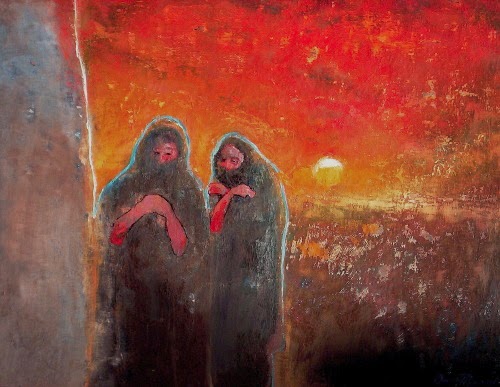 To head out of town.

They can’t believe it.

This isn’t to knock on Doubting Cleopas and Doubting Nameless other guy.  If anything, it’s what makes this even more of a relatable gospel for us.  When we lose someone we love – whether it’s a tragic, sudden accident, or after a long, difficult illness; or a sudden – out of the blue sickness – whatever it is, there’s no “easy way” to deal with death.  My grandmother died after being in a nursing home for 2 and a half years with dementia – my grandfather went to bed at the age of 94 having gone to Rutts Hut for a hot dog with my mom and spending a regular afternoon with her and died with absolutely no warning at all.  Both deaths hurt.  Both caused grief. Yes, they even caused doubt.

What the Gospel of Emmaus tells us – quite simply – is the way to nourish our faith… the way we experience Easter, not just one day a year, not just for a 50 day season – but the way to become an Easter people… the way we are able to recognize Jesus when we struggle and are confronted with the hopelessness that sometimes we experience in life, the hopelessness that the reality of death breeds – is the Mass. 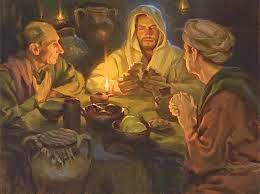 That’s not to “plug” Mass or guilt you into making sure you go to Mass every Sunday (although that’s a good idea) but to look at what happens in the Gospel.  Jesus has to remind them of all that God has done – for them, for all humanity.  He has to stir up other realities, other memories that might have been displaced in the face of the harshness of death. He does that as he shares the word.  He basically proclaims the scriptures (what we have just done).  And then he summons them to the table, he breaks the bread and in the greatest mystery, greatest gift we could ever have been offered, he offers them His body and His blood in those elements of bread and wine in the Eucharist (which we are about to do). As he “disappears” from their midst – their hearts are still burning within them… they are able to run back to town, to go back to the rest of the community they had just hours earlier abandoned, and be with the rest of the disciples, some of whom are still struggling in their faith, some whom have experienced similar revelations of the Risen Christ themselves.

For our seniors tonight, as we prepare to “send you off” as you prepare for Graduation, and the various next steps of life, there is a lot of Joy tonight. This is the goal, the purpose of your time here at MSU, to graduate, to be prepared for that next step whatever that next step is (for some of you that might have taken a little bit longer than you anticipated…but I digress). But there is sadness too. You’ve come to become part of this community – we’ve grown together – and it’s natural for us to fight and rebel against change. We will miss seeing you each Sunday, throughout the week… But as our alumni who’ve joined us tonight can attest to – when you continue to go to Mass – we’re all connected as a church, we’re all united as members of the Body of Christ in a beautiful, supernatural way that makes these bonds stronger in a new way.  Just as when a loved one has passed… and they’re physically not with us any more but those bonds of love, those connections are still real – we’re still connected to them (that’s why we have Saints in the Church – to show that we believe that even while they’re enjoying God’s embrace they still haven’t forgotten about us and still pray for us!).  The pain of separation – however it comes in our lives –is painful – but our faith shows us how our hearts expand as our lives go in different directions and that the connections here weren’t just about Newman or the various people who make up this dynamic community, but about the One who is the center and head of this community – the Risen Christ.

The call of the disciples on the Road to Emmaus to all of us here tonight is to make Christ’s presence real to those around us:
to those we already know,
to those we will soon meet in the upcoming phases of our lives;
to make it true here and true to the farthest corners of the world –
to bring Him and His light to all who have fallen into despair.
To the hopeless and afraid; to those who await a zombie apocalypse – or something even worse – to those who believe in the empty creed of nothingness, thinking that their lives here are meaningless, and that their future is an empty void of nonexistence.

We are to melt those hearts that are suffering in disbelief, struggling in pain, that are terrified of death the destroyer – and, by our lives and our faith in and love of Jesus Christ, to transform those around us – even as our own hearts burn within us as we continue our journey with Christ, proclaiming the astonishing truth that Jesus comes to bring us eternal life – a fulfilling and meaningful life, one united with Him in all eternity, of course; but a life which also has depth and breadth and meaning here and now, because of Him.