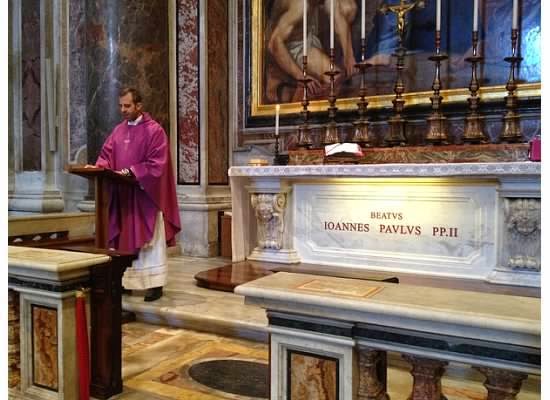 Back in April 2005, I was an occasional Op-Ed writer for Fox News’ website.  When Pope John Paul II passed away, the editors had asked if I would write something.  I remember feeling intimidated by the request.  What could I as a priest at that point being only ordained 6 years say that others hadn’t already said (in no doubt more eloquent ways)   Here’s what I submitted which surprisingly was published.

I had just reached the part of the mass that most Catholics know by heart from attending Sunday mass—the Eucharistic Prayer.
Though the prayer is said in different languages around the world, the words haven’t changed in thousands of years. As I recited the lines of the prayer “Lord remember your church throughout the world; make us grow in love, together with …”, it hit me. I’m so used to saying “John Paul, our Pope,” in that space. But, but now, just a few hours after he had died, I paused. There was no name to say in that place. The reality that the pope was gone hit me at that moment.
After mass, I realized that I cannot recall another pope’s name being said in the prayer. I was almost 5 when John Paul II was elected, and I can’t even remember that.
In fact, sadly, my first memory of the pope was the day he was shot. I was 7 years old. I 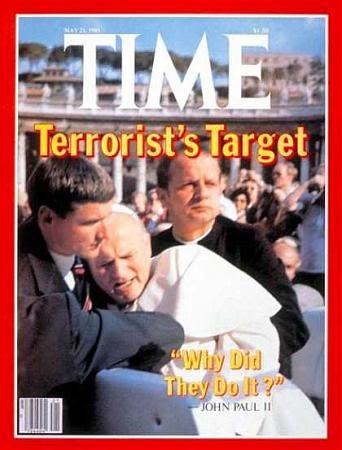 remember watching the news of the shooting on television, and crying as I told a neighbor that “they shot the pope.”

My friend, a year younger than me and a non-Catholic asked “Why?” I remember replying, “I don’t know.”
In my child’s mind, I could not fathom why anyone would want to hurt a man who loved and served Jesus. It didn’t make sense. Twenty-four years later, it still doesn’t.
I don’t recall hearing daily reports about the pope’s recovery or the length and time he was in the hospital. In the next memory I have of him, he is recovered and recuperated. It was the day he went and forgave the man who shot him, Mehmet Ali Agca. The image of the Pope going to see this man in prison, and this man, who shot him, smiling as the Pope comes and offers forgiveness, is all that matters in my mind.
People can, and will debate, what will John Paul II’s legacy be. For what will the global community most celebrate and recognize him? Helping to defeat communism? Bridging gaps between Roman Catholicism and other faiths? Being the most traveled pope in history? 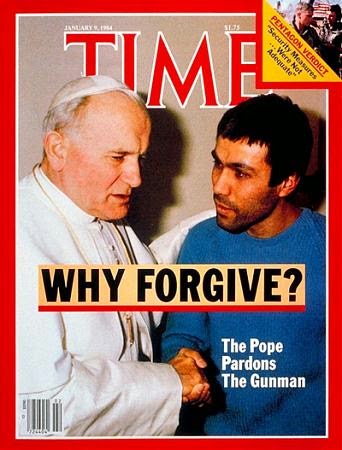 People have been appropriately praising all of these feats. The “experts” will discuss whether John Paul II made the Church too conservative, or more balanced. People will debate whether the hierarchy of the Church has become too centralized in Rome, or if that centralization has helped unify the church. Those are all questions that history will answer – and not any time soon, but centuries from now.
However, it is the memory of the pope forgiving the man who tried to kill him that has forever marked my life. At the time it happened, I couldn’t comprehend it.
Growing up in an Italian-American household, the youngest of three boys, getting beaten up was a somewhat normal, ordinary occurrence. Forgiving one another was usually something we were commanded to do, as my father insisted we were going to be “the Love brothers.” But the apologies and forgiveness were somewhat shallow; as soon as mom and dad were out of earshot, my brothers and I would claim to each other that we “didn’t mean” our forgiveness.
Here, now, was this guy who didn’t “beat up” the pope; he shot him. But when the man said “I’m sorry,” the pope said “I forgive you.” Of course, I wasn’t there, but the smile on that man’s face as the pope left him that day told me that the pope had truly forgiven him.
That gesture of forgiveness—possibly the greatest teaching this Holy Father could have given to one of his son’s—has been something I aspire to, and try— with mixed results— to emulate. How it fitting it is that the pope’s last words echoed the same lesson: “To humanity, which at times appears lost and dominated by the power of evil, of selfishness and fear, the Lord resurrected offers as a gift his forgiving love, reconciles and reopens the spirit to hope.” 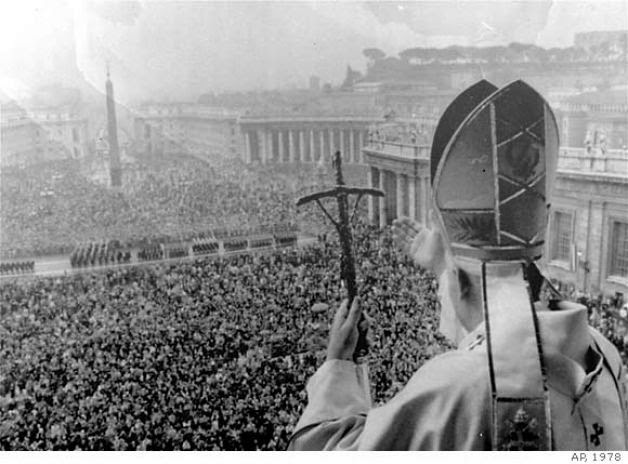 In teaching that lesson, this Holy Father has imparted the most important lesson to his son’s and daughters: That Jesus Christ’s love and forgiveness still has the power to change the most hardened of hearts.
In the end, John Paul II’s greatness may be attributed to many things. But most important to the heart of the Christian was this Christ-like witness in his words and actions. Could there be any greater standard for a pope?