Hi everyone, here is my homily for the FIFTH SUNDAY OF LENT – April 6, 2014. The readings for today’s Mass can be found at http://usccb.org/bible/readings/040614.cfm .  Thanks as always for reading, sharing the blog with your friends on Twitter, Facebook and Redditt – and your feedback and comments.  God Bless, Fr. Jim 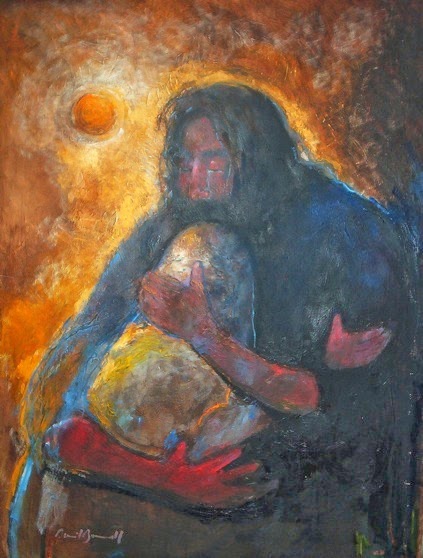 So a random fact-toid for you the next time you’re on Jeopardy or playing Trivia Pursuit. While the Gospel we just heard is somewhat lengthy one, within that reading was the shortest scripture verse recorded in the whole New Testament: John 11:35 “And Jesus Wept.” In some translations, they even drop the word “and” – which would tie it as the shortest verse in the whole Bible. Those two words: Jesus Wept.

A couple of words that say so much.

Because think about it. What does it means when we say someone wept?

It’s more than the act of crying.

You weep when you feel deep, intense feelings. Raw emotions for someone or something… You can feel it in the pit of your stomach. Your heart aches. You’re so overwhelmed by the feelings that you’re experiencing that you’re unembarrassed by the flood of tears.

On the one hand no one would wish this experience on another, knowing how hard and painful an experience it truly is. But on the other hand, weeping reveals something immensely important: when you’re experiencing that much pain, you know without a doubt that something has touched you that deeply to the core of your being that you realize the depths of love. When someone has wept, it’s because something meant that much to them.

Which is why this shortest of scripture verses is somewhat puzzling.

That this is recorded tells us how striking it must’ve been for the witnesses. It’s not like Jesus didn’t know what he was able and capable of doing and would accomplish for his friend Lazarus. He knew he could and would raise him from the dead. He didn’t weep for himself.

So why? Why did he weep? Some thoughts come to mind:

Jesus wept over the fear that His disciples still had after all this time they had spent with Him. After all they had seen that He could do, after all they had heard Him speak of a God who would not let anything, ANYTHING stop Him from attending to His children in need… Just look at this gospel – as soon as the disciples hear this news that Lazarus, a friend of Jesus, was seriously ill and needed Jesus their response to this news was but Jesus, the last time we were in Judea, people wanted to stone you…it’s not safe – They tried to talk him out of going back! So Jesus wept over that fear that gripped and still grips his followers.

Jesus wept over the distress Lazarus’ sisters had experienced in seeing their brother die and be entombed.
Their pain, pained him.
Their hurt, hurt him and so he wept. That’s how much Jesus loved his friends and loves his friends. Our tears don’t go unnoticed… no they evoke tears from Jesus.

Jesus wept because of that doubt. The doubt that came from seeing this dead man who was in a tomb. They were relying more on the harsh evidence of a sealed tomb than with the heart of the Samaritan Woman, or the eyes of the Man born blind that we encountered in the liturgy the last two Sundays that testify to the greatness of what Jesus wants to do for humanity… that Jesus has power over even death itself.

Jesus wept because he saw that the hoped for future promise of eternal life and resurrection of the dead wasn’t enough to remove all of this pain they were going through. His followers, despite all that was to come, despite his ultimate victory over death in His own resurrection would still experience the pains and sting of death.

Jesus wept because He realized that if the death of Lazarus could cause some of his closest followers such distress, He could only imagine what his passion and death on the cross would do to them. Yet He knew that He needed to endure that passion and death so that God would be able to do even more miraculous, life-changing things for humanity, namely saving them.

Jesus wept over those who would refuse to hear His life-giving voice, calling them out of those tombs, rejecting the opportunity to experience newness of life in His radical gift of forgiveness.

Yes, Jesus wept because he Loved.

Jesus wept, because he Loves.

Jesus wept because he knows that for some people, the gift he offers of Himself so freely, so willingly, so selflessly – for some that wouldn’t be enough… Some would simply question, put their trust in other “gods.” Reject the only God ever known to have come down and wept with us and for us, so much does He care for us.

And why He still does.