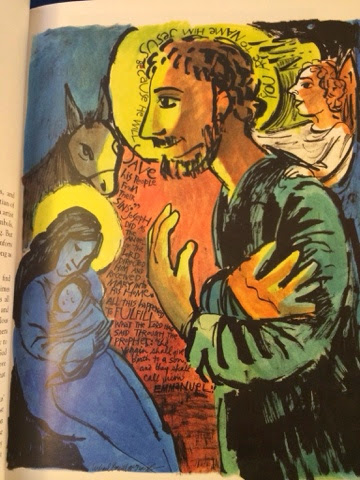 HAPPY FEAST OF ST. JOSEPH!  Patron of the Universal Church.  The readings for today’s Mass can be found at http://usccb.org/ bible/ readings/031914.cfm.  As always thanks for reading these homilies and for sharing them.  God Bless You!  St. Joseph, Pray for Us!  – Fr. Jim

HOMILY:
About a week ago, depending upon your perspective, there was a headline that made you happy or extremely sad.   Lady Gaga threatened (promised?) she might quit the music business.  I’m sure for her legions of fans, this provoked a mad dash of tweets, Facebook posts demanding an UNLIKE button and so on as often happens in our day and age.  Not to question Ms. gaga’s motives, but part of me thinks she accomplished her mission.  She drew more attention to herself simply by saying something.

Not to pick on Lady Gaga – she’s just another example of our fame-obsessed culture.  To feed a desire for greatness that humanity obsesses over, there’s this belief that one needs to be “relevant.”  Hence more and more often, all of us can fall into believing that we too need to broadcast every aspect of our lives to the  world – looking for likes, retweets — looking for attention.
What a contrast St Joseph offers us today.  Curiously he is silent through scriptures – there’s not one quotation of his recorded in the Gospels.  We hear about him in the Gospels, but that’s it.    Even his interaction with God isn’t a dialogue with an angel (as The Blessed Virgin Mary experiences) but rather he receives messages in dreams where it’s an intimate and private conversation that we know about – but don’t know what was said between The Lord and Joseph.
Yet one of the things that makes him such a revered Saint… Makes him the Patron of the Universal Church…  The model of workers, of fathers… Makes him a contrast to our very un-humble world is precisely that.  His silence.  His faith and trust in Gods word.  His responsiveness to God.  He simply does as the angel tells him.  He doesn’t question, complain, obsess and certainly doesn’t broadcast it.  He does it.  Probably thinking in awe of what he was being invited into… Perhaps wondering:  who am I to have received all this attention from The Lord to be included into his plan for salvation?  How is it that God the Father would Gift me to  have Mary as my wife and Jesus as my foster-child?
Ironically, in his abject humility and silence he becomes probably the only carpenter anyone remembers from the first century.
Which points out one of the great messages St Joseph speaks to us today.  It is in our reverence and attention to Gods word to us… It is in our obedience to Him that we become truly great – and then find the only attention that we ever need: recognizing how loved we are as Gods children.  The Father loves and trusts us much that he wishes to include us in His ongoing plan of making Jesus Christ known, not always with our words and certainly not in giving into that temptation, that desire for attention — but in listening in the silence to how God calls us… And in humbly, obediently responding to His personal invitations to each of us.
May St Joseph intercede for us that we may possess:
the graces not to fear things hidden,
the strength to be still,
the fortitude to be patient and
the courage to say yes to The Lord to the action of the Holy Spirit in our lives.