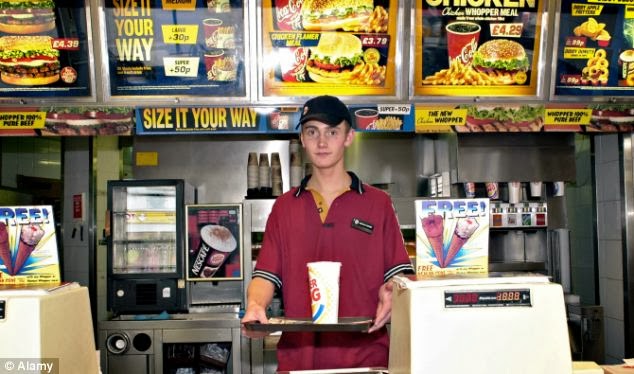 Hi everyone here’s my homily for the SECOND SUNDAY IN ORDINARY TIME – January 19, 2014
The readings can be found at http://usccb.org/bible/readings/011914.cfm  Thanks as always for reading, sharing the blog and your comments and feedback.  God Bless You and have a great week!  Fr Jim

It must have been in fourth grade.  My friend Lee Cohen had called me on a Saturday afternoon to say his father was going to the Menlo Park Mall to go to Burger King and wanted to know if I could come with them because they needed my help.  Couldn’t imagine at first what was so daunting of a task about going to Burger King that they would need my help – but I don’t think I asked any further questions as I was already screaming “Mom can I go with Lee and his Dad to Burger King?”  Ahh the good old days when I was young and could just eat junk food with reckless abandon.

Anyway, as we were on our way there, Mr. Cohen explained that he was doing a secret investigation.  As a side job he was hired by the King (not Jesus, the Burger King) to investigate how different franchises of Burger King were being operated and then he would share his findings with the company.  Having two 10 year olds with him made it easier as a cover in terms of ordering a whole bunch of stuff off the menu to taste-check how things were prepared.  But it wasn’t just that.  It was almost a game, Lee and I had to see if we found anything else in the store: was the salt shaker empty?  Was the Coca Cola too flat?  Where were the napkins located – was the napkin holder full or empty…  How were the people at the register?  Were they nice or not?  How was the bathroom?  (I still remember – what almost 30 years later – that was one of the areas that this Burger King did not score very high on Mr. Cohen’s report – as I shiver in disgust at that thought)

No detail was too small.  And I thought it was kind of neat that here we were like secret agents reporting to the King (again, not Jesus, the Burger King) all our findings.   How different would the people have been had they only realized who we were and what our purpose was.  We wondered would Mr. Cohen’s report result in people losing their job?  Or perhaps a promotion (doubtful after that bathroom visit…)  In the years since, as there seems to be more national chains for food and shopping, these types of mystery shoppers or guests have increased and almost become an industry themselves.  Rather than seeing it simply as something to punish bad franchises, in many instances they have become a way of making sure that establishments don’t forget the importance of all the customers that they encounter.

One of the immediate things that hit me with this Gospel is the directness of John the Baptist to each one of us.  Look at what he says “Behold the Lamb of God!”  You might remember about 2 years ago the Church revised a lot of the prayers and responses at Mass.  One of those changes happened to be the invitation for communion where the priest used to say “This is the Lamb of God who takes away the sins of the world.”  That not only obscured the fact that the invitation was coming from this Gospel- that we were quoting John the Baptist – but it also changed it’s meaning.  Because saying “This is the Lamb of God” is more of a declaration – like “This is an altar” “This is a chair” – by changing it back to it’s Gospel roots, think about what we’re encountering.  “Behold” goes beyond merely looking at something … its practically demanding our attention to recognize something or rather someone on a much deeper.  John the Baptist’s knew who Jesus was already – it was his cousin!   But after the Baptism of the Lord, when the Spirit came down upon him, the voice of God the Father spoke – well that changed John’s perspective quite a bit.  So his invitation to “Behold the Lamb of God” reveals that he had the eyes of faith to recognize Jesus the Messiah, was there in their midst.

As we hear those same words at Mass, we’re invited into the awesomeness of the miracle of what the Eucharist is – that the Holy Spirit has transformed bread and wine into the actual, real body and blood of Jesus Christ.  That Jesus becomes as real and present in that Body and blood as he was in the manger at Bethlehem, walking on the sea of Galilee, offered on the Cross at Calvary and risen three days later.  That’s what we believe-  which is why it’s appropriate for us to Behold his presence, Behold the awesomeness of the moment, Behold the love of God which allows us to take, receive Him, to consume Him.

But it’s not supposed to end here.  What happens when we leave this gathering?      Like my friend Lee, his Dad and I secretly taking notes do we recognize the King (and this time not the Burger King – but Jesus himself) that he is hidden right among us.  This time though hidden in the poor, the troubled, the needy, the helpless… Hidden in your dorms, that roommate you can’t stand, the class mate who’s sitting alone in the student center, the cafeteria worker who no one acknowledges other than to mock or yell at,  the professor who always seems like a jerk (that perhaps had some major family trauma happen that no one knows about who made him like that)   Just as we need eyes of faith to recognize him in the bread and wine, we need to take those same eyes of faith with us to Behold the Lamb of God among us even outside of this gathering.  At the start of this new Academic semester, just a few weeks into this new year, can we use this opportunity to delve into the mystery of Christ’s presence among us and look for ways not simply to behold it but bring his light, his love, his healing, his forgiveness into our own times and places.