MERRY CHRISTMAS!!!!  My prayers and best wishes to you and your family.  Thanks for sharing this blog, all your feedback and comments.  God Bless – Fr. Jim 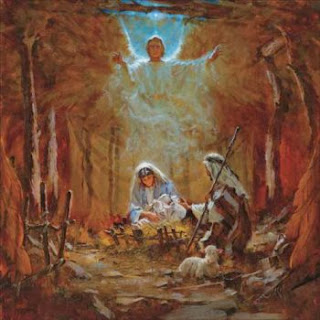 But to those who did accept him
he gave power to become children of God,
to those who believe in his name,
who were born not by natural generation
nor by human choice nor by a man’s decision
but of God.
And the Word became flesh
and made his dwelling among us,
and we saw his glory,
the glory as of the Father’s only Son,
full of grace and truth.  – Jn 1:1-5, 9-14

And the word became flesh…
Not too long ago, I encountered a student who once he realized the total black outfit I was wearing wasn’t a fashion statement (as he asked “are you a priest?”) somewhat quickly, peculiarly said “I don’t believe in God.”
Six and a half years ago, such a encounter walking on the University campus where I serve as Chaplain to would’ve startled me or confused me –  why would someone go out of their way to tell me about something they don’t believe in?  But experience has revealed that such bold declarations aren’t about looking for a fight (even if they come across as provocative). Usually the ellipses that are invisible in normal conversation (you know, the three little dots or periods that tell you there’s more there) if they were filled in, I think, would say but I used to, or I wish I could.
This campus encounter is by no means isolated or unique.   Right in time for Christmas, a poll a week ago revealed that the percentage of people who believe in God has continued to drop over the years and has reached a new low of only 75% of all people believing in God (http://www.upi.com/Health_News/2013/12/22/US-belief-in-God-down-belief-in-theory-of-evolution-up/UPI-24081387762886/)
People speculate the reasons for this trend downwards:
Our sophistication in a world that seems to be rapidly developing more gadgets and devices that isolate us into ourselves (even as they promise to keep us more connected to one another).
Our own personal struggles that deteriorate our faith in countless ways on a daily basis.   Families going through some strife – Mom and Dad are fighting, or the kids are having problems that there’s not an easy answer to… Grandma isn’t doing so well… Grandpa passed away… Someone’s been out of work and they’re not sure how to make ends meet.   Maybe all of the above and then some.   When people are experiencing those types of hardships that weigh on their hearts, that definitely undermines people’s belief in a God who loves us, who cares for us… a God who exists…
Then there’s our lack of faith and trust in one another.  Polls indicate that we as Americans rate all of our lawmakers, no matter what their party affiliation, with great disdain and feel that the government is our biggest threat –(a government we elected by the way).  If that’s accurate, that we have so little trust in one another, and our earthly leaders… well, it’s no wonder that belief and trust in a God who remains hidden from human eyes would suffer significant doubt.
And yet, in the midst of the chaos that we have made of the Christmas season – the full extent of which hit me as I risked my life at a super market yesterday after somewhat naively asking my brother “hey you need anything from the store?”– What is Christmas really all about?  Christmas is about God removing the veil that hid him from our view.
Christmas is about God revealing himself – no longer through the words of prophets, or through incredible visible feats that needed to be recounted and interpreted by others.
Christmas is about God becoming very visible to human eyes.
Christmas is about God becoming one with us and remaining with us.
That’s the most essential point, the truest, eternal gift of Christmas – Jesus Christ, God becoming man, the word becoming flesh.
That’s why our hearts are moved to see the beautiful simplicity of a baby in a manger with two new parents.  As we gaze on them, as we reflect on the scene – we can relate to it.  We can imagine for Mary and Joseph, sure they are filled with wonder and awe.  The birth of a beautiful baby boy…not to mention angelic sights and sounds in the background…that’s the joyful part of the story.
But we can’t dismiss the real human drama of what they were facing.  No room at an inn, so they end up in a manger… Their fears, their anxieties, their doubts over the whole situation they’re faced with.  As poetic and beautiful as we like to romanticize the scene – more than likely it wasn’t a “Silent night, holy night” for a very long time.
Yet in the midst of that – lying there is our God.  Jesus – the word became flesh.  And in that becoming visible, becoming really present to us- Heaven and Earth touch and unite for the first time in the history of human history since the rift that began in the Garden of Eden when our first ancestors turned away from God and first introduced sin into humanity.  To this day, we all know all too well how we still struggle with the realities of sin – manifesting itself in all those things that cause us to doubt God and want to choose our own way (somehow imagining that this time it will work better)  Yes, falling for the same temptations, and then feeling the effects of that fall, those painful choices.
But the promise of Christmas is that Jesus Christ’s entrance into humanity, His becoming flesh wasn’t limited to a moment of human history.  He remains here, accessible to us, among us even in the midst of our own struggles, our own fears, our own temptations and grief and sorrow – Jesus is here.


If we can begin to look for Him in the love and kindness and generosity of one another rather than making him some heavenly Santa to answer grown up Christmas lists containing some heavy stuff – we find something greater, something more important than we can ever imagine.

The word becoming flesh.  Dwelling among us.  Remaining with us.  May the joy of this eternal truth we recollect tonight fill our hearts with the true meaning of Christmas.  Inviting us to recognize once again his presence among us
… and on our part, choosing to remain with Him.