Hi everyone – here’s my homily for the THIRD SUNDAY OF ADVENT – December 15, 2013.  The readings for today can be found at http://usccb.org/bible/readings/121513.cfm  As always, thanks for reading, for sharing the blog and your comments and feedback.  They are much appreciated. 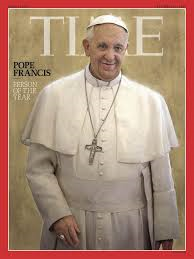 This past week, Time Magazine made their annual announcement of their selection of “Person of the Year.” By now I think that a vast majority – including those of you who don’t that Time Magazine still exists – knows that they selected our Holy Father Pope Francis for this distinction. Not that Pope Francis doesn’t deserve the recognition, but I think there was shock both from inside and outside the Church that the editors of a very mainstream, current events magazine like Time would pick Pope Francis. Particularly when you hear some of the people who were his competition:
– Kathleen Sebelieus – HHS Secretary and Sen Ted Cruz who, whatever your opinion of Obamacare, both of them made lots of news (for different reasons) over that law.

– The founder of Amazon Jeff Bezos who recently purchased one of the leading newspapers in the US – The Washington Post;

– Miley Cyrus, the former “Hannah Montana” child star who’s kind of gone off in a different direction as of late;

-and Edward Snowden, the whistleblower living in exile in Russia to avoid prosecution for his revelations (especially the National Security Agency’s tapping our phones).

Hearing that list of prospective candidates, to me Pope Francis smokes any of his competition – but I admit, I’m biased on all of this(just an FYI, if you should ever meet a priest who thinks Miley Cyrus should beat Pope Francis for Person of the Year, yeah, you want to avoid them)

What’s been fascinating is that Time’s selection of Pope Francis as Person of the Year isn’t just an isolated thing of praise of him from outside the Church. The Holy Father (who remember has only been Pope 9 months) has enjoyed somewhat unprecedented acclamation in this media-age of ours:  Headlines on as diverse sites as The Huffington Post saying “We love him” and Gawker.com’s: “Our cool new pope”. Commentators on the cable news network MSNBC has been gushing in their praise.

– Singer, songwriter Elton John, who’s been quite critical of the Church in the past, was interviewed by Vanity Fair magazine a few months ago and said “[Pope] Francis is a miracle of humility in an era of vanity” and that “[Pope Francis’s] beacon of hope will bring more light than any advancement of science, because no drug has the power of love.”

– Even comedian Chris Rock tweeted a few weeks ago: “I might be crazy, but I got this weird feeling that the new pope might be the greatest man alive.”

It’s a bit surreal to see and hear all of that. There’s often an over-emphasis on the more

cynical and negative in the media. Most times, when the Catholic Church is concerned, well we’re almost a punch line of ridicule from so many corners of the world because of our beliefs and teachings. Sometimes some of our public failures: – scandals revealing some horrific sinful things that individuals committed, examples of hypocrisy that are infuriatingly arrogant and embarrassing – seem to eclipse the vast majority of good the Church has done. All of that makes this praise for Pope Francis so extraordinary.

Among Catholics there’s almost this skepticism about the attention. Some think it’s a plot to build the Pope up so that they can tear him down later. Others believe that this is simply the “honeymoon period” for a new Pope that once he speaks at greater length on some more controversial topics, he will be dismissed as out of touch (as were his predecessors) and still others think that people are kind of using Pope Francis’ warmness and gentleness in approach as a blank canvas where they kind of throw their own beliefs and hopes of what they want the Church to believe or say about certain issues.

While there’s a part of those theories that might be partially true, I do think that there’s something else going on. Which I think we can pick up in the conclusion to the Time magazine piece that said: These days it is bracing to hear a leader say anything that annoys anyone. Now liberals and conservatives alike face a choice as they listen to a new voice of conscience: Which matters more, that this charismatic leader is saying things they think need to be said or that he is also saying things they’d rather not hear? The heart is a strong muscle; he’s proposing a rigorous exercise plan. And in a very short time, a vast, global, ecumenical audience has shown a hunger to follow him.

That’s what it is – on the surface it’s this hunger to follow him… that there is this fascination, this cheerleading from people and corners of the world that some of us (myself included) never imagined we’d see. But the thing is Pope Francis is tapping into something global, something deep and vast that is hitting all corners of the globe. For what?:

Some people might think that’s controversial or provocative. And I’m not saying people are lining up for mass-conversions to Christianity (at least not yet). But when we get down to it, that’s what’s going on here. That there’s a God-shaped whole in the heart and soul of every human being. That for many throughout the world they’ve been trying to fill it with things, with power, with pursuits for things – all of which left them empty, unfulfilled or unsatisfied. And so when this man appears on the scene and is able to communicate eternal truths in a new way, it gets people’s attention (Time put it this way – “[Francis] is simply saying what Popes before him have said…—only he’s saying it in a way that people seem to be hearing differently.)

Which is why as “new” as this Pope might feel – it’s simply that the Word of God is alive, is active and coming to us through his words and actions in our day and age in a new way, that is simply communicating a universal, eternal message. We just read in the Gospel that 2,000 years ago the world was a very similar place. The people that were going to John the Baptist, were all looking for that deep, eternal hunger to be filled for God. John’s preaching (which we heard last week and which landed him in jail in today’s Gospel) proclaiming that the Lord, the Creator of the entire universe, He is not some distant transcendent being who simply whipped the world into creation and stands idly by disinterested. He is not some other worldly master and ruler that wants us slavishly being obedient to him lest he wipes us out. No we have a Lord who is a Father that is so in love, so interested in you… in me… in each and every member of His creation that He desires friendship, intimacy, union with us. He desires to bring us ultimate fulfillment where the blind regain their sight, the lame walk, lepers are cleansed, the deaf hear, and the dead are raised – He wants to fulfill all those true needs that long to be healed rather than the false ones we’ve been led to believe are so important. That fulfillment, those hopes and dreams are found in the God become man Jesus Christ.

Ultimately, objectively, when we look at both Pope Francis and John the Baptist – people were not reacting to them personally. John the Baptist is wearing hairshirts, eating locusts and honey in the desert (not too pretty) Pope Francis is a 76 year old man who doesn’t even speak English. The reason they attract universal attention is not because of who they are, but rather whose they are. As sophisticated and evolved as we have become as a society 2,000 years later, the world is still intrigued once again by the Hope that Jesus brings to humanity. As the curiosity of those taking a second look at Christianity – they are in a real way asking those of us who come here week after week for our answer. This Jesus is He “the one who is to come?” May the joy of being in relationship with Jesus be evident in our lives, as it is in Pope Francis’, to say “Yes – come and see yourself.”