Hi everyone, here’s my homily for the SECOND SUNDAY OF ADVENT – December 8, 2013.  The readings can be found at http://www.usccb.org/bible/readings/120813.cfm.  As always, thanks for reading, sharing the blog and your feedback and comments.  They’re always much appreciated!

— A quick Christmas commercial here.  Our Newman Center is in the midst of our Annual Christmas Appeal.  We appreciate your considering helping us as we continue to serve the college students here at Montclair State University.  Read more about it here , there’s a Paypal link available if you wish to make an online donation.  THANK YOU! 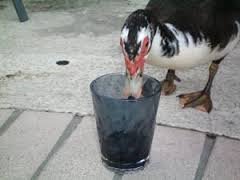 There is a reason we call some things “unsolicited advice.” – It’s unsolicited… It’s being given without being asked for and more often than not, we don’t want to hear it – let alone following it!. Parents are often accused of being guilty of this by their children (with NO age limit being attached to either party); in-laws too, allegedly give out scads of unwarranted opinions and advise; and of course “they” give us a lot of advise…

They say to buckle your seatbelts when you drive

They say they say orange juice is the best source of vitamin C; make sure you eat well/healthy

They say don’t talk (or text!!) on your cell phone when you’re driving

No one is really quite sure who “they” are , but “they say” and more often than not we tend to go along with it. And, if we’re honest with ourselves, from the duck getting plastered at a bar – to me not driving without my seat belt on as I’m on my cell phone… whether we want the unsolicited advise or not, very often it proves helpful and in some cases even necessary:

Tonight the season of Advent – the season where we focus on the “coming’s of Christ” shifts a bit… last week the readings had us focus on Christ’s coming at the end of time remembering how we are living in an age, an “advent” of anticipation of His final coming… in a couple weeks the scriptures we’ll have us return to Bethlehem, recalling that historic first coming of Christ… But there’s another coming of Christ that Advent remind us of. How Jesus comes to us today – here and now.

We don’t gather every Sunday to remember something that this person Jesus said 2,000 years ago as we eagerly await his return. We come face to face – heart to heart with our Lord and Savior Jesus Christ here and now, in our day, in our age. He comes to us in our encounters with one another, particularly in how we love one another, care for one another, love our enemies… He comes to us in this place where we will receive His Body and Blood in the Eucharist which He left as His eternal abiding presence for us. He comes to us in this His word – His scriptures, which when they are proclaimed, they are spoken anew. 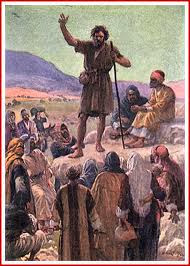 And in this “fresh” proclamation of tonight’s Gospel we have this character, and oh boy, what a character he is who gives unsolicited or unwelcome advice. John the Baptist – this man who’s eccentric at best – He’s sitting out there in the desert, eating grasshoppers and wild honey, wearing the equivalent of a grain sack and a belt. I’m guessing personal hygiene may not have been one of his strong points either. And yet the gospel claims: “At that time Jerusalem, all Judea, and the whole region around the Jordan were going out to him.” And they’re not going out just to see some sort of a circus freak… John the Baptist has something to say to anyone who will listen: “Repent and reform your lives! The reign of God is at hand.”

We even hear that these important people in the Jewish faith – the Pharisees and Sadducees – even they came out to hear John the Baptist, because although he’s seen as a little weird – well tons of people were going to him and listening to him (some even thinking he was the messiah)- so the Pharisees and Saducees go and check him out and what does he do? He calls them a bunch of poisonous snakes; He says to them they can’t just claim that because they are Jews making them God’s Chosen People that’s some sort of an insurance policy making them all good with God. While John is on a roll he says “oh and another thing Pharisees and Saducees your work as religious leaders stinks. That was unsolicited and unwelcome enough – but when he tells them what they have to do, that’s even worse – Prepare the way of the Lord – and how? REPENT.

Like the duck – there probably was a bunch of them who wanted to tell John to mind his own business! And for a lot of us, we can have a similar reaction… because “repenting” means perhaps, just perhaps we’ve done some things wrong that need to change, that there are some areas in our life that need reform and human nature being human nature, we often don’t want that unsolicited advice. We need it, but we don’t want it.

The reason that when we come to Mass tonight and we find that we’re not into the FALALA and HO HO HO’s and Deck the Halls stuff is because John the Baptist speaks to us today to remind us that all of that is meaningless if Christmas isn’t about Jesus Christ and what He is about. And what is He about?

He’s about making you and I right with God.

He’s about making you and I right with each other.

He’s about bringing that Light into the darkness

He’s about bringing ultimately bringing about that day when those beautiful visions of Isaiah in the first reading aren’t just visions but a reality.

When you think about it – how often do we complain about all that’s wrong with the world? We want Peace throughout the world – it sounds so cheesy because we have a vision of a Miss USA contestant saying that in answer to “What is your greatest wish” “world Peace”.

So we give some unsolicited advice for God – yeah – make that happen God. Oh, God, by the way – I want peace in my families, in my dorms, in my classes, in my workplaces too… make that happen.

And that’s why John the Baptist interrupts our lives, interrupts our busy, busy schedules and says – Repent – don’t count on the fact that you were baptized, and received your sacraments to say that you and God are all good when you know there are things that have separated you from God – separated you from one another. Repent because we won’t ever find world peace, we won’t have peace in our relationships until we have peace in our own lives. John the Baptist reminds us that We can’t celebrate the true meaning of Christmas – that God has come to us – until we realize we’ve messed up the paths for Him to come into our hearts and our lives right here and right now. We’ve made them crooked, we have things blocking that path and John the Baptist is saying take this opportunity, take this time to “clean that up – straighten that path out.”

Two thousand plus years later that’s the message of John the Baptist who is still that voice crying out in the wilderness and that’s the unsolicited advise he gives to us today. Some of us may find it amusing, much like some fairy tale. Others may find it annoying and think like our friend the drunken duck – that John the Baptist, the Church and all the clergy would do a lot better if they minded their own business. But if we’re honest with ourselves, whether we want the unsolicited advise or not, very often it proves helpful and in some cases even necessary – especially if we truly desire this Merry Christmas we keep hearing about.