Latest News
Home /Blog/POPE FRANCIS HAS BECOME A PHENOMENON BY PREACHING A SIMPLE GOSPEL OF LOVE: 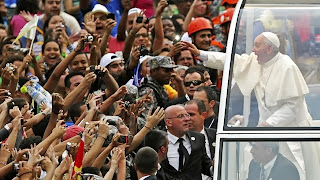 “Media and critics can run wild with two paragraphs of more than 40,000 words or a sidebar to a long conversation.

But what Pope Francis is saying to Catholics and the world is so much more than a headline about capitalism or abortion.

When he talks about meeting the needs of the poor, for instance — as he sounds alarms over our use and abuse of one another as disposable, as he warns against indifference — he is not only talking about material poverty. We are bodies and souls! And that’s the pope’s business: Changing lives and saving souls.”

AMEN – AMEN – Read the whole thing: POPE FRANCIS HAS BECOME A PHENOMENON BY PREACHING A SIMPLE GOSPEL OF LOVE:  http://nypost.com/2013/11/30/pope-francis-has-become-a-phenomenon-by-preaching-a-simple-gospel-of-love/