Hi everyone, here’s my homily for the SOLEMNITY OF OUR LORD JESUS CHRIST, KING OF THE UNIVERSE – the readings for today’s Mass (the inspiration for today’s Homily) can be found at: http://usccb.org/bible/readings/112413.cfm .  As always I’m grateful for your reading, commenting/feedback and for sharing this homily with others.  Always humbled each week to see the hundreds of visitors to this blog.  Have a Blessed Thanksgiving!  In Christ, Fr Jim 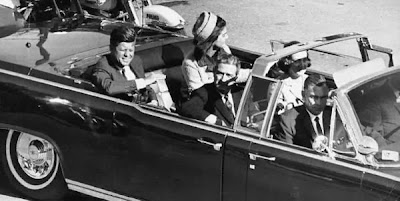 It was hard, if not impossible to avoid coverage of a sad historic anniversary this past Friday. The 50th Anniversary of the Assassination of President John F. Kennedy. Newspapers reprinted their editions from 50 years earlier announcing the shockingly tragic news. National Geographic Channel scored the largest ratings ever for their network about a week ago for the airing of a Made-for-Cable TV movie called “Killing Kennedy”. Memorial services were held around the nation.

I’m sure that for some of us, it seemed a little odd to see so much attention paid to such a tragic event… especially since the vast majority of us (myself included) weren’t alive when this occurred. I’ll be honest I can’t remember when I was 15 years old and the nation marked the 25th anniversary of the Kennedy Assassination, which with both JFK’s wife Jaqueline Kennedy and their son JFK Jr. still being alive, had to have been a big media event. Perhaps I was disinterested or unaware of that commemoration simply because I didn’t understand the psychological and emotional effects of living through such a historically horrific day until living through the horrors of 9/11 myself. Now I can see how both tragedies really did something to our collective psyche, particularly realizing that there was clearly something different for our nation. A clear difference living in a world of “before” and “after” this fateful day.

In some ways I have to imagine that the assassination of JFK was even more shocking for people. With television having only been invented and in peoples homes about 15 years at that point, this was the first real atrocity that people could witness, experience for themselves playing out on their own home screens. Seeing pictures of the President and first lady leaving Washington DC a day before… welcomed and greeted by crowds of people, only to see that awful footage of him being shot and learning within 30 minutes he was dead and a new president had been sworn in, had to have been terrifying, shocking… Seeing JFK’s wife, a young woman herself at age 34, arriving home that night to Washington DC, still wearing the blood stained clothes, arriving with a coffin by her side where her husband had been standing with her just days earlier – such senseless violence stunned our nation. The meaningless of it all, 50 years later haunts us as a nation. That was something you could pick up if you watched any coverage of the anniversary.

To this day, commentators can only speculate how different would the world would have been had November 22nd, 1963 not occurred. Try as people might to create a legacy for President Kennedy, that too really doesn’t exist because of his assassination. He’s become more of this tragic character where individuals continue to search to attach meaning to his death. He was not gunned down like Dr. Martin Luther King Jr was for trying to bring an end to bigotry, racism and injustice. He was killed by a disturbed, former citizen of the Soviet Union, a communist named Lee Harvey Oswald, who’s motives still seem simply to be that of a crazy person. Even allowing some conspiracy theories to be considered, 50 years hasn’t really debunked that lone-gunman theory, which has continued to make this seem that much more tragic. And so for people who lived through the killing of JFK, that terrible day still resonates with a large segment of them because it killed a part of them. The commemoration exposes the wound of the unfulfilled and horrifically ended hopes, dreams and expectations people had for the President, for the Nation, even for themselves that took place in one afternoon in Dallas Texas.

As this weekend of remembrances for a slain President comes to a close, it’s interesting that the Church ends it’s “Church Year” (next week with Advent, the season preparing for Christmas is the start of a new “liturgical year”) with today’s celebration entitled Our Lord Jesus Christ, King of the Universe. That’s a pretty bold declaration right there when you think about it. We’re not just saying he’s King for us who follow him… we’re not calling him King of the Kingdom of heaven or of the Kingdom of God which evokes images of some spiritual realm. We’re calling him King of the Universe. That means he’s more powerful than you’re University President Dr. Cole…. our State Governor, Chris Christie… our President Barrack Obama…The Pope… Every visible person of power, of influence, of authority – they pale in comparison to the authority of Our Lord Jesus Christ, King of the Universe.

Yet, very strangely, we would think that to validate the boldness of such a title, we would have readings that would speak of the Universal power, greatness, awesomeness of our God and His Son Jesus who he’s entrusted with this authority. Perhaps a reading from Genesis of the creation of the world. Or the story of the Exodus of God’s people, where the Lord leads the Jews from the slavery of the Egyptians by parting, separating the Red Sea into two so that the Jews could escape safely and when the Egyptians in their stubborness continued to pursue God’s people, he let the waters envelope them. Or most certainly, we would imagine the story of Jesus’ resurrection from the dead or his glorious ascension into Heaven would be an appropriate Gospel for us to proclaim: the greatest victory of any king in the history of humanity… thereby validating why we are being so bold inc alling him King of the Universe. 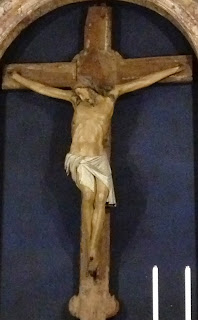 what happened to our King. We just heard the account from St. Luke of Good Friday. We heard how that title, “king,” was used as a way of mocking him by those who carried out his brutal and savage murder of crucifying Jesus. And that’s intentional. Because while we as a nation have grown to accept the tragic and brutal end of JFK’s life and his presidency, the paradox of Christianity is that in the brutality of Good Friday, Jesus’ true power, true authority begins.

Rather than fighting these proceedings, calling upon legions of angelic help to assist in this moment of seeming defeat, he accepts the pain, the senselessness, the loneliness of death on that cross to be able to speak to every human being who will encounter the cruelities of a broken world I know what you’re going through. He knows not on an intellectual level, or from observing the pain of someone he loves… He knows having experienced all of this himself. So for example, to the people in the Phillippines right now who’ve experienced massive devastation, destruction and death from the Typhoon, Jesus speaks “I know” and has been a source of comfort – a source of healing for many. To those of us here, on this campus – who are experiencing our own storms, who feel alone, and scared, and abandoned — who are hurting in ways that they try to hide from everyone, their professors, their classmates even their friends and their loved ones – Jesus says I know what you’re going through.

But it’s not about simply bonding with humanity in their suffering. We don’t come here to commiserate about the horribleness we experience in this life. We can dare to stare at the crucified Jesus, we can dare to share our own personal crosses and crucifixions here knowing that it is in Jesus Christ alone that our sufferings can be transformed. That Good Friday was not the end. Had it been, his early followers would’ve sadly recalled that anniversary – recalled it with the sad realization that their hopes and dreams for that man had ended on the cross and years later few would recall his life or his death (Aside from JFK and Lincoln – I had to look up the other two US Presidents who were killed)

Instead, we recall Jesus’ death knowing he overcame that and came back from the dead. He came back not looking to settle scores with those who inflicted such evil but to save those very people and everyone of us from Sin, from death. We come to our King who comes to us, still offers us His Life, His death and His Resurrected life when we eat His body and blood in the Eucharist as the most intimate way He can say not only I know what you are going through, but even more, I am with you and will be with you always.