Hi everyone, here’s my homily for the 31st SUNDAY IN ORDINARY TIME – November 3, 2013 the readings can be found at: http://usccb.org/bible/readings/110313.cfm. Thanks as always for reading, sharing the blog and all your feedback and comments! God Bless- Fr. Jim

TO LISTEN TO AN MP3 OF TONIGHT’S MASS, CLICK HERE: 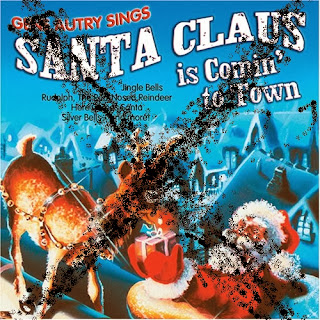 So if you happened to come across my Facebook wall the other night, you might have noticed I had complained: It’s 11:55pm on Halloween night and I just saw my first Christmas commercial. [insert rant about people rushing the seasons here] I mean, it was just bizarre to go from hearing the Monster Mash at the end of a newscast followed by the rattling of jingle bells for a Christmas ad for Petsmart. The next day at the CVS they had removed any trace of the Great Pumpkin for images of Snoopy dressed as Santa. And a friend ranted later that afternoon that a local radio station switched to playing 24/7 Christmas Carols. Literally in a few hours, I found myself surrounded by an onslaught of Christmas stuff while still witnessing leaves on trees in their autumn colors. Try as I did, I couldn’t avoid it or even ignore Christmas songs getting into my head. And what’s worse – the one that did get into my head was my least favorite Christmas song ever… (which is probably why it caught my attention) the song? “Santa Claus is coming to town.”

Again – first off it’s way too freaking early to be talking about any of this, isn’t it? I mean, I’m not an expert in all things Santa Claus, but doesn’t Santa need snow and ice to ride and land a sled on. I don’t think piles of leaves on the street would make for a soft landing. Second with the temperature hitting a balmy 70 degrees on Friday, Santa would be sweating up a storm in his suit right now. He’s not coming to town for a few weeks, so calm down people.

But it’s not just about this terrible timing that has me not liking this song. Were it December 15 and 10 degrees outside with some snow flakes in the air, my hatred of that song would continue because think of the words to that song:

you better not pout;
you better not cry;
you better not shout… oh, I’m telling you why…
Sorry – I have no doubt some parent was desperate who had no control over their kids had to have written this song – trying to get their kid in shape by spreading these lies about Santa to fear them into better behavior…

He sees you when your sleeping;
he knows when your awake –
he knows when you’ve been bad or good, so be good, for goodness sake.
Seriously, how freaking creepy is this? What demented minds thought this was a great Children’s song about Christmas and Santa.

For the most part I think kids dismiss it as they learn pretty early on that Santa is much more understanding, more forgiving – Jolly even – that even if he is spying on us worse than the NSA is – somehow he moves beyond the kids failures and is pretty generous to them come Christmas morning.

More surprising though to me, and much more serious to me is how many people have transferred the imaginary fears, the empty threats of that song and kind of made them into a personal theology of theirs. Believing that this is how Jesus treats us… that Jesus is watching to see us fail… That He is taking note, making a list, (checking it twice) paying special attention to our faults with some giant ledger book that should we find ourselves in debt, in the “red” on our last day – well, enjoy Hell…

Just think about how many people we know who say things like “I could never go to Mass – because I’ve done…” and then they fill in the blank with some painful failure they’ve experienced. Or they stay away saying “I’d feel like such a hypocrite going there” or “that place is FULL of hypocrites.” However it is expressed, I’m convinced that one of the greatest achievements the devil has made is this distortion of who God is – who Jesus is, and his relationship to us.

If you find yourself trapped in that mode of thinking or if you have friends or family that do, this Gospel tonight levels those beliefs more definitively than a stocking from Santa packed on Christmas day from for some bratty kid ever did.

In this Gospel, we hear about a hated figure – Zacchaeus. He’s hated because he’s a Jewish guy who was in cahoots with the very people that were oppressing his fellow Jews. The Romans hired some of these “turncoats” to get the taxes from their fellow people. And to add further insult, the Romans allowed the tax collectors to add a surcharge for themselves. So to put it in a way we could understand – imagine Canada took over America (I know, I know…it’s ludicrous, but just go along with me) so the Canadians find some American to collect taxes from his fellow Americans. And here was the deal – the Canadians only wanted 15% of an Americans income, but the tax collector, he could charge whatever he wanted – 20%, 25 %, 30% – and keep that extra as a personal surcharge… There’s no one to complain to, there’s no appeals process or anything. So as Americans, we wouldn’t be too happy with this fellow American working with the Canadians.

He knows that he’s been bad, not good, for goodness sake. But having heard all this buzz about this Jesus, curiosity gets to him. He was seeking to see who Jesus was. The crowds probably blocked the short guy…Glared at him as he even tried to attempt to make his way towards where Jesus was. But deep within – maybe he could hear some of Jesus words, or just sensed something about his presence, makes him more and more desirous to see him.

So he runs ahead – ahead of the crowds, ahead of Jesus… He climbs a tree, hoping just to catch a glimpse of Jesus up close. Probably thinking – I’ll be able to see him, and he won’t see me – because none of my fellow Jews want to see me, why would this, this special, special Rabbi ever want to see me? But something happens – Jesus looks up… He looks right at Zacchaeus, He calls him down and invites himself into his home.

What that glance from Jesus does for Zacchaeus reveals that God isn’t looking with judgment, condemnation at him. And it helps Zacchaeus to sense in that look of love that he himself desires change…he desires transformation. And He knew that he could trust Jesus to do just that. Which is what Jesus is looking to do with each and every one of us. He’s not looking for us to simply gather in the crowd and to think we’re covered because we’ve made it here. He’s definitely not interested in our comparing ourselves with others who’ve we deemed as outcasts in a comparison game of sorts where we lie to ourselves saying “I’m not as bad as they are.”

No he wants us to acknowledge the failures, the sins, the things we’re struggling with – the messes that our lives have been and to see that Jesus wants to say to us “today I must stay at your house.”

C.S. Lewis, one of the greatest of contemporary Christian authors talks beautifully about what happens when Jesus invites himself in- not just for Zacchaeus, but everyone of us. He says “Imagine yourself as a living house. God comes in to rebuild that house. At first, perhaps, you can understand what He is doing. He is getting the drains right and stopping the leaks in the roof and so on; you knew that those jobs needed doing and so you are not surprised. But presently He starts knocking the house about in a way that hurts abominably and does not seem to make any sense. What on earth is He up to? The explanation is that He is building quite a different house from the one you thought of – throwing out a new wing here, putting on an extra floor there, running up towers, making courtyards. You thought you were being made into a decent little cottage: but He is building a palace. He intends to come and live in it Himself.”

The Gospel makes it clear that Jesus isn’t an angry Santa writing us off a list… but rather the divine architect and contractor who desires to stay, to dwell, to live within us. Who has great dreams and plans for our ultimate happiness. Who wants to help clear away the messes we’ve made by giving us the Sacrament of Reconciliation – we’re one confession away from being made completely clean… Who wants to reveal the great plans he has for our joy, our fulfillment, to make us into the disciples he truly has called us to be – both here and now, and ultimately for all eternity.