Hi everyone – here’s my homily for the 30th Sunday in Ordinary Time – October 27th, 2013. The readings for today can be found at http://usccb.org/bible/readings/102713.cfm. As always thanks for reading, sharing the blog and your feedback and comments. God Bless, Fr Jim 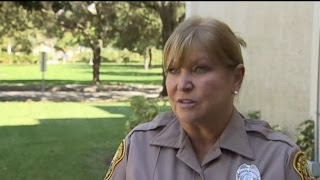 Usually cops follow the motto “To Protect and Serve” – well this story has the potential to flip that to serve and protect.  This past week, what started out as a somewhat routine, common shoplifting call to a Miami-Dade Police Officer became an international news story. Police Officer Vick Thomas, who’s been a cop for over 20 years got a call from a local supermarket that a woman had been detained after filling her shopping cart with almost $300 worth of groceries and simply walking out the front door. As Officer Thomas arrived on scene, she went to the general manager who took her to the young lady who had been caught in the act. As she met Jessica Robles, and asked her “why did you do this” – through her tears Jessica said “My children were hungry.”

Officer Thomas admits she’s seen sad stories, she’s helped people out on the job in ways that most in the public never will know about. But she admitted “this really impacted me.” She knew that some of the local food pantrys and soup kitchens probably were closed by this point. Robles confessed “I’d love to be able to promise you I’ll never do this again, but I can’t because my children are hungry.” Thomas’ thoughts turned to her kids and grandkids. She told the woman to wait with her partner while she grabbed her debit card, went back into the store bought her enough groceries to get her and her kids through the week. After driving Jessica to her home, Officer Thomas met two of her three children. “She went into the house and said, ‘Come outside. The officer bought us groceries,’” Thomas said. “They came outside and they were helping us bring the groceries in, going through the bags asking, ‘Can I eat this? Can I have that?’”

Officer Thomas said “I honestly didn’t know the magnitude of how bad it was until later,” she said. “We got the groceries in and I got back in my car and took the next call.”

It’s doubtful that Officer Thomas was taught to do this by some instructor at the Police Academy. Nor is it a standard protocol that would be explained in a manual or something that her supervisors would expect her to do. Had she chosen to, she could’ve simply done her job, fulfilled her duty as a police officer and arrested the woman and not given a second thought to this sad situation. But as Officer Thomas explained “I had to act.” 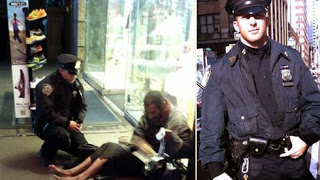 NYPD officer Larry DePrimo who made headlines some months ago when he bought a homeless man a pair of shoes one cold night last winter) People who don’t just do their jobs, but are able to see these individuals who are in these bad situations as a fellow human being and not just whatever label so many would attach to them – to see the needs of their fellow human being and are compelled to do something, to know they have to act.

To not allow themselves to fall into the trap of becoming self-focused or self-involved. Because when that happens – it affects everything. That’s what’s at the root of tonight’s Gospel – the thing Jesus wants to warn all of his hearers to consider. Because when that happens, when we are self-focused or self-involved, We can get so stuck on ourselves that even our prayer becomes focused on us.

Look at this guy in tonight’s Gospel reading. The Pharisee says – O God, I thank you that I am not like the rest of humanity– greedy, dishonest, adulterous – or even like this tax collector I fast twice a week, and I pay tithes on my whole income.” There’s nothing wrong with what the man in the Gospel has done:

– not being greedy or dishonest are good things

– Jesus would totally be onboard with that avoiding adultery…

But the thing is – the guy in the Gospel seems to be praising and worshiping Himself rather than God. He uses the word “I” 4 times, and God’s name is uttered once in that whole prayer. Because he’s doing everything, he sounds like he doesn’t need God or even prayer for that matter. He keeps saying I do this and I do that… and in saying (and believing) that, he is the active one. God is just an afterthought. He’s just making sure God noticed…

We hear the complete opposite from the Tax collector – he never uses the word “I”- Instead his prayer is simple, it’s humble, it’s correct: God be merciful to me a sinner. The tax collector knows that his life is a mess. He know’s he’s made some mistakes. He’s cheated people, been rejected by his own people (for aligning himself with the Romans instead of with his fellow Jews) – he’s all on his own. To straighten his life out – he needs Mercy. He needs Forgiveness. He needs God and He knows that only way things are going to change in his life is by God showing him Mercy – By God working in his life. By the tax collector letting God be God and letting him into his heart and soul. . . things can change for him.

That all of us have chosen to be here tonight is a great thing. But there’s a temptation for us to congratulate ourselves because we know that we’re missing a great number of people that we wish were here. We can either stay in that mind-set there, be proud of ourselves for being here and not like those who are watching the Red Sox tonight (I don’t recommend either of those things – being proud or watching the Red Sox by the way) or you and I can be like the tax collector, look into our hearts and be honest with ourselves and with God.

We can ask ourselves the difficult questions: What changes do we need to make in our lives? How are some of our desires out of whack? What are our limitations? Unlike the Pharisee, we don’t have to compare ourselves to others. God sees the empty spaces we have that we need him to fill – God knows the sins we carry that need his Mercy. So instead of congratulating ourselves for being here, we can be grateful to have the opportunity to be here. Grateful to let God be God and to let Him do His work in our lives. By our sharing in this Eucharist, who knows what work God might accomplish?:

– giving someone the benefit of the doubt;

– letting God be judge of things instead of us;

– not just forgiving – but forgetting ours and others past mistakes and offences.

The possibilities are endless.

Officer Thomas’ selfless act of kindness and generosity more than likely will recede from the public view as these stories eventually do for all of us. But in an interview she shared that this whole experience has been “life-changing” for her, for Jessica, for her family – as more and more people heard this story and were moved to assist Jessica find a job and were challenged to see who were some of the people around them that perhaps they had been quick to judge and dismiss who simply needed there help.

When it comes to our lives, we need to change too. And when it comes to things like Prayer and our relationship with God, Jesus calls us not to be blind or narrow in our perspectives. The Pharisee was too pleased with himself and all that he has accomplished to recognize anything that needed to change in his life, and so he leaves the temple no different than when he came in. The gospel says the tax collector went home “Justified”—changed. That means he was in right relationship with God. Something had changed in him through his prayer. The choice is ours – which of the two characters do we pattern our prayer after? Do we need, do we desire, and do we know that it is God who can ultimately change us?