Hi everyone… Here’s my Homily for the 22nd SUNDAY IN ORDINARY TIME – September 1, 2013.  The readings for the day can be found at: http://usccb.org/bible/readings/090113.cfm.  Thanks as always fore reading, sharing the blog and your feedback.  God Bless – Fr. Jim 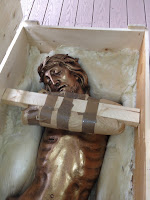 ++++ Quick commercial:  We’re coming to the end of our ANNUAL SUMMER APPEAL.  We’ve raised close to $9,000 towards our goal of $15,000 this summer. CHECK OUT THE NEWMAN CATHOLIC WEBSITE – particularly the tab marked “HELP”  to see before and after pictures of the new patio we just installed… this week the 15 foot outdoor crucifix arrived from Italy (the pic to the right shows it in the crate as we prepare for it’s installation in front of the center this week.  Go to http://www.MSUNEWMAN.com/  and click on “Summer Appeal” for more information.  Thanks to all for the generosity and their consideration of this appeal! +++++++++++++++++++++++++++

After last Sunday Night’s VMA (Video Music Awards) show on MTV and a week of ongoing discussion about it, I hesitate to even bring it up, but it has bothered me ever since. I doubt few of you don’t know what I’m even referring to, but, should you have fortunately not seen or heard about it, Miley Cyrus, yeah – well she gave quite a “performance” last Sunday night.


Now please don’t think that I sit home on Sunday nights in late summer watching MTV. I had gone on Facebook to respond to a message and there was someone who had posted something on the “Timeline” that said “You have to see this…” so I had to click it (the post did say that I HAD to…) And in about five minutes, the former Disney star of “Hannah Montana” put on a show that really disgusted and horrified me. Using teddy bears, appearing dressed like a little girl who eventually stripped down to underwear of a nude color where she and Robin Thicke(and I’ll save my comments about that guy for another day) basically performed a depraved porn act… look, I realize as a priest you’d expect me to be a bit of a prude, but honestly it was beyond the antics of Lady Gaga dressing in meat or some of the stunts that Justin Timberlake has pulled. It was so above and beyond being over the top that I was just disturbed and disgusted.

I have to admit that I was surprised with the number of people of college-age who agreed with me on facebook and twitter who wrote they were similarly turned off by it. And while people are still talking about whether Miley (and MTV) crossed the line or not (or even debating about whether such a “line” exists anymore) – or what this means culturally in terms of acceptable vs unacceptable things. That’s not the saddest part of the thing to me. I mean, we can have a lengthy discussion on modesty, sexuality, etc. and those are all important things to talk about and think about. But that didn’t seem to the thing that bothered me the most.

The saddest part of the whole thing was seeing the absolute depths that this young girl, who’s obviously talented, has popularity, has money, has “fans” – how low she will go to desperately be noticed, talked about, tweeted, posted, etc. How much fear must she have that if she didn’t out-raunch Katy Perry or Lady Gaga that she would be finished? So she didn’t care about turning off a whole generation that followed her in those innocent childhood days as Hannah Montana. She has so little confidence in her talents, in her ability and ultimately in herself that this was her answer to what direction her career should go. As a further sign of how addicted and fixated on publicity she is, the very next day, after that ridiculous show, she shows up in the newspaper at an airport wearing a set of kiddie Pajamas. I mean, this girl really is desperate for any attention.

One of the reasons I even bring this up (at the expense of giving Miley what she wants – more attention) – is that she kind of falls into an example of what Jesus is talking about in this Gospel today. Jesus had gone to this party at the home of a leading Pharisee (which were a group of Jewish priests) And he can’t help but see how desperate for attention they all seem to be as they “were choosing places of honor.” It probably sounded something like this: “I should sit at the head table!” “No I should” “I do this and this, so I belong up there” “Yeah, well I used to do those things, so I should.” (Too bad the host didn’t think to have name tags at the place settings) The point is that the guests have all gotten into this debate about who was more important than the other. Pathetically looking for more attention.

In the midst of this pretty ridiculous scene, Jesus uses the opportunity to speak about humility. Humility is a tricky thing. Some seem to have a good grasp on the idea of “False humility” where they ignore their gifts and talents and say “I’m not a good singer” or “I’m not as good as she is at baking” or “He’s a better leader than I am.” Humility, true, authentic humility is recognize all your gifts and talents and all the beautiful things that make you you – and not flaunting it over another person to minimize them, not brag about them as if you simply decided you were going to do those things and just be great at them. Humility means recognizing all those things as gifts – GOD given gifts, that have been given to you, entrusted to you to use for God’s kingdom, for His glory.

That’s why Jesus is disappointed at what’s happening at this party. Here are a lot of what the world would consider “important people” who have positions of authority and leadership. And they are so obsessed about exactly where they fit in order of importance. They aren’t recognizing their gifts. They aren’t recognizing where those gifts came from. They aren’t putting them to the use of the people God entrusted them to serve.

Because of that blindness, Jesus offers them a somewhat shocking suggestion about what they should do at their dinner parties to solve the seating arrangement dilemma.”Invite the poor, the crippled, the lame, the blind: Blessed indeed will you be because of their inability to repay you.” Such a bold suggestion is meant for them to see how ridiculous they’ve become, stop worrying about who gets to the top of the table and rather display true greatness, true strength of character – by realizing that when we share our very selves – the best of ourselves – with those who are struggling, who are in need, who because of a variety of reasons have had things befall them which may have caused them to forget how blessed and loved by God they are– by putting these brothers and sisters ahead of ourselves, that is the way to demonstrate true greatness. Not because by doing that we are hoping or trying to get Christ’s attention, to sit at his right or his left – but more importantly, in doing those things we actually become Christ to others.

Imagine the effect we could have in our families, in our dorms, in our classrooms, in our workplaces if we kept this lesson in our hearts and minds when we left here. Looking for opportunities not to mock or diminish someone else, but to assist them, befriend them. Some of you might have met roommates or people on your floors who seem “weird” – when in fact, maybe they’re alone, maybe they’re frightened. Imagine the effect we can have if we made that effort to simply welcome them, introduce ourselves and invite them to something (and not give up on them because they didn’t jump at the opportunity the first time). Those are all opportunities on the horizon as we begin a new academic year, with over 4,000 new Freshmen just arriving. 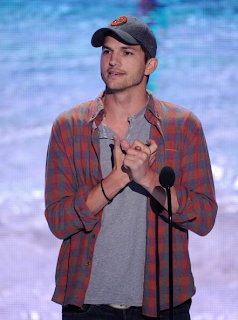 Its by looking for those kinds of opportunities to be of service, to be a true friend, to be Christ for one another that people canf eel loved and accepted as children of God – that we start to live as brothers and sisters that some of that fighting for attention will cease.  How awesome would it be if Miley Cyrus could hear from a fellow celebrity who just a week earlier made almost as many headlines for doing and saying something that was completely opposite of her ‘act.’  Ashton Kutcher took the moment of accepting his Teen Choice award to say, something that became so newsworthy because they were so humble (and sadly unexpected to be heard among cultural idols) when he said [One thing that I’ve learned is] The sexiest thing in the entire world, is being really smart, and being thoughtful and being generous. Everything else is crap, I promise you. It’s just crap that people try to sell to you to make you feel like less. So don’t buy it. Be smart. Be thoughtful and be generous.

May you and I not allow ourselves to be distracted, tempted by the desire to be accepted by what’s considered (or “who’s” considered) popular – desperate to fit in with those who have appointed themselves important. But rather keep our lives focused on getting invited to the only dinner party that matters, who’s host has told us what is required to get on the list: Jesus, the ultimate host, who tells us, “Every one who exalts himself will be humbled, but the one who humbles himself will be exalted.”