Latest News
Home /Blog/WHERE IS GOD WHEN YOUR COMPUTER BREAKS? 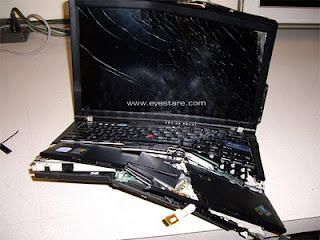 Hi everyone, hope you’re summer is going well! Here is my homily for August 4, 2013 -the 18th Sunday in Ordinary Time. The readings can be found at http://usccb.org/bible/readings/080413.cfm Thanks for reading and all of your feedback! God Bless –
Fr. Jim

I’ve had quite a love-hate relationship with electronic gadgets in my life. From my iPhone which I’ve talked about multiple times – to my computers. I’m not a complete idiot with computers, and I’m not a computer expert… I think I know just enough to mess them up, slow them down, and make them a big old mess. So a few years ago, my laptop of three years had slowed down so badly, the battery (that I had replaced) wouldn’t work right (the thing randomly would just go off, simply turn itself off whenever it wanted) – I realized I could take it to someone to try to fix it and tell me what was wrong (and probably charge me a ridiculous amount of money to do it) or put that ridiculous amount of money towards a new one. So I went to Dell, picked a laptop, upgraded every possible thing I could to make this thing launch rockets if I wanted (well maybe not, I still haven’t figured the whole system out yet)… Anyway, this thing is pretty intense – Gigs, chips, cards, you name it.

The thing is pretty cool. It’s fun to work on. I can do multiple tasks at once without it slowing any of them down (perfect for someone with ADHD) I can drag and move things all over my screen (still learning how to do all that too…) Pretty quickly I was able to take all of my documents, pictures, emails from the last 10 years on all different hard drives and stuff and get them on this new thing. It’s just incredible.

I only had the thing for a few months, and had been away for a couple of days and had brought my incredibly awesome super-powered-turbo PC Laptop with me. I Had packed it my book bag, which was convenient to carry it around in. And put it in the back of my Jeep. When I got home, I pulled up to the Newman Center and saw some garbage on the front lawn that I just had to pick up instead of unpack my stuff (remember ADHD). My friend opened the back of the jeep to grab his bag and my bookbag rolled out of the jeep right onto the pavement of the street. It was like a movie, I could see it in slow motion as I started to yell “NOOOOOO”.

I brought it inside and I’m praying, I’m actually praying “Oh please God, no, no, no” as I turned it on and discovered that yes, yes, yes the monitor was completely gone. I ran to Best Buy in a panic looking for the “Geeks” of their so-called “Geek Squad” “Mumbling to myself as I ran into the store Please God, Please God…” only to meet said geek who laughed and said “Nope, we can’t do anything with a Dell…” (How are they Geeks then? I mean aren’t they supposed to do anything?) Now I’m on the phone with Dell still mumbling prayers that they can tell me something to do instantly to fix it or somewhere I can take it that they will fix it in the next day – simply because everything I was working on and needed to work on was on this machine.

Needless to say, God did not answer my prayers that day. It would cost me over $500, it took close to 2 weeks to fix. I was aggravated with everyone – my friend who opened the back of my jeep (THE NERVE OF THE GUY) the geeks at the Geek Squad, the people on the phone at Dell who obviously didn’t realize the urgency of my emergency… Why oh Why God do you mock me!!!! And so ends another sad chapter in my life -vs- machines.

How stupid though. Not just me vs the machine (and packing it in a bookbag!), but even more, how stupid I was in allowing myself to become so reliant on the computer to the point that I wouldn’t say I was looking for some divine intervention – but I definitely wouldn’t have minded if there had been some! Which in hindsight is incredibly embarrassing. Of all the things to pray for – that I would, even momentarily be looking for my DELL TO BE HEALED! When I realize all the people who really need prayers, are hoping for divine intervention – well it’s embarrassing to me.

I guess that memory got triggered as I read this Gospel encounter about this one brother who feels he got the raw end of the deal with his brother and this inheritance. Obviously he recognizes Jesus as an authority and wants some justice, wants some divine intervention of some sort. (If Jesus couldn’t convince the other brother, maybe he could you know smite him or something?)

And not that the guy isn’t entitled to his fair deal. And not that Jesus isn’t concerned about a person who’s been mistreated by a relative either. The thing is, after all that Jesus had preached about… Last week teaching us how to pray with the Our Father… things that made the young man realize Jesus spoke with authority, Jesus was divine, the thing that concerned him – the thing that drove him to the front of the line to get a word with Jesus was something trivial as money.

What’s beautiful though is how Jesus handles the whole scene. He calls the man “friend.” And as a true friend he points out that this injustice that he’s rightfully upset about is taking up a little more room in his heart and mind than it blinded him from the absolute love of God in front of him. Jesus is kind of saying to him, “Of all the injustices that were going on in the world, this is the one you want to bring to me?”

For each of us today, the Gospel gives us an opportunity to do a pulse check on our spiritual lives. As we were coming to Mass today, getting up to come to Church – what were some of the intentions we had on our hearts and minds. For example, were we praying for that promotion or raise or to win that lotto which are all decent things, but maybe we’re forgetting how many people are unemployed and worried about where there next paycheck would be coming from and will they make ends meet?

It’s not that Jesus doesn’t want us to share with him all that’s going on in our lives, but it’s about priorities. Jesus is constantly reminding us how quickly life passes by. For some faster and sooner than ever expected. Keeping our eyes fixed on Him, loving Him, seeing Him in the world and those around us – we have countless opportunities to grow deeper in love with Him and be focused on spending eternity with Him and sharing this great news to the rest of the world. In the light of the promise of eternity, an inheritance, and even a broken laptop pales in comparison.