Hi everyone, here’s my homily for SUNDAY JULY 14, 2013 – the Fifteenth Sunday in ordinary time. The readings for today can be found at http://usccb.org/bible/readings/071413.cfm As always, I appreciate your reading, sharing the blog, feedback and comments.

++++ Quick commercial:  If you have a moment, CHECK OUT THE NEWMAN CATHOLIC WEBSITE – particularly our “SUMMER APPEAL” section. See before and after pictures of the new patio we just installed… We’re trying to raise another $15,000 to cover the new 10 foot outdoor crucifix that will be installed outside the Newman Center http://www.MSUNEWMAN.com/ .  Thanks to all for the generosity and their consideration of this appeal! +++++++++++++++++++++++++++ 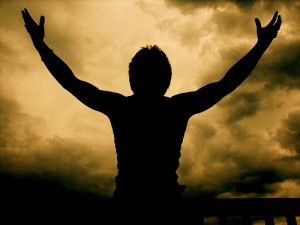 If God is so good, why does he allow bad things to happen? That’s the question isn’t it? It’s something that has confounded Saints, theologians as well as been used as a debating point by unbelievers from one generation to another.

Best-selling author Kathleen Norris wrote about a memorable plane trip she took from Lexington, Kentucky to Denver, Colorado. She recalls that it was an early morning flight and that she had gotten little sleep the night before so she was looking forward to some during the trip. (Have to note, how nice it must be not to have irrational, white knuckled, heart pounding fear when traveling in an airplane that one can even plan on sleeping while flying, but I digress) Well as soon as she sat down on the plane, the passenger sitting right next to her, a young man about 18 or so, immediately began talking. His conversation was somewhat nervous and very excessive that she realized it wasn’t just an anxious teenager. She quickly surmised that he suffered from some form of autism, that he was alone and indeed nervous.

She quickly abandoned any plans of getting any sleep, and instead spent the whole flight talking with him. As they neared the airport he became a bit agitated and kept repeating to himself, almost like a mantra, “my aunt will meet me at the gate.” To help put him at ease, Norris offered to walk with him to the gate where his aunt was anxiously waiting. She was so relieved and grateful to see that someone took the time to look out for him and see that he got safely to where he needed to go.

Norris shared this recollection in an essay she wrote on “asceticism.” We might have heard churchy word before. . . but have no idea what it really means. Well that SAT word of the week come from Greek and means: “exercise, practice, training, a mode or manner of life.” Norris explains that : “Religious asceticism, is always for others. That is all it can be. And if one is fortunate, as I was on that plane, one knows what one must do. No polite excuses, no tuning out. The command comes loud and clear: be here, now! And the demands of the body, the whining of the self, recede into the background. The stranger, the demanding other, then becomes gift and grace.”

So often, I’m embarrassed to admit that I find myself fighting internal battles over “my plans” and being confronted with something I perceive as an imposition to those plans… The phone rings and thanks to Caller ID, I know it’s someone who is going to want to talk for awhile and I’ve convinced myself I have too much to do right now and I’ll call them at that completely undefined period of “later.” Someone has passed away and the wake falls on a night when I had something planned and, momentarily, completely self-centered thoughts pop up “but I was going to do such and such that night.” And those are just two embarrassing examples from my life revolving around people I know, care about and love (that I do overcome). When it comes to strangers, I can find myself quickly asking, wondering, judging that they will be demanding something of my time, myself that those selfish inclinations try to shut me down (and sometimes, sadly, are successful) from my being attentive, being receptive to them. Which is why Norris’ beautiful definition about religious asceticism are worth reflecting again – – the demands of the body, the whining of the self, recede…the stranger, the demanding other becomes gift and grace.

Isn’t that what Jesus is trying to teach us in the parable “the Good Samaritan” today? The beaten man on the side of the road, to many of us, we respond like the Priest and the Levite – who are knowledgeable of the things of God, versed in the things of religion, but for some reason find ourselves walking by. Making excuses as we do so as to why we wouldn’t (or shouldn’t) get involved. “It’s not safe;” “Who knows why he’s in that position, maybe he brought that upon himself” “I’m sure someone’s called the police or the EMT’s.” Whatever it is we would tell ourselves not to be imposed as we join the priest and the Levite walking right by the man.

Jesus points out to us, he’s not interested in our reasoning – no matter how logical or justified we can pretend those reasons are. We are called to model ourselves like the Samaritan who hears the command loud and clear and knows he has to be here, now to the needs of the beaten man on the side of the road. He was willing to abandon whatever plans, schedules he had, He chooses to get involved in a way that the majority of people do not.

If you’re like me, this isn’t a new lesson… It’s not particularly earth-shattering revelation. It’s something we who gather together for Mass on Sunday would completely be on board with (and expect for ourselves if we were on the “beaten man” side of the story) That’s why the whole introduction to the parable is so important. The lawyer who engages Jesus at the beginning of this Gospel (and elicits Jesus’ response of this memorable parable) wasn’t asking Jesus those questions to get information from him or trying to learn something new. Like any good lawyer, he most likely knew the axiom you never ask a question in court that you don’t already know the answer to. The Gospel tells us the lawyer had entered into this exchange “wishing to justify himself” – that’s his purpose for dialoguing with Jesus. He knows what is expected of him in attending to the needs of a neighbor. And so do we. And those opportunities to “be here, now” and tend to the needs of others may come, as Norris’ demonstrates, at the most unexpected times and places and not always when convenient for us.

Because, the reality is that every single one of us is going to encounter bad things that happen in the world. Despite all the inventions we’ve made, the level of sophistication our culture experiences 2,000 years since Jesus first walked this earth – we still experience evil things happening. – Why a person is beaten up on the side of a road; why a young man is afflicted with autism and filled with fear and anxiety – why any of the range of things that sadden and trouble and afflict each and everyone of us – abuse, illness, death – too often we allow that question of “Why” those things happen to dominate our minds. We justify ourselves by assigning the blame to God as we excuse ourselves from any responsibility to these difficult situations. We don’t have a satisfying answer as to Why but we do have an antidote to it.

Jesus Christ, being fully divine and fully human and experienced all of the same pains, the same hurts, the same abandonment and aloneness that all of humanity experiences throughout His life, and especially in His passion and His death. And in His Resurrection, he defeats evil for all eternity. At it’s heart, the story of the Good Samaritan is about Him. It is Jesus who is the Good Shepherd to all of Humanity. He doesn’t stay stuck on the why we as humanity are beaten up by the side of the road (which is a result of sin – our own personal sin, the sins of others affecting us) No, Jesus doesn’t look to assign blame, worry about his own plans (God’s initial plans for humanity didn’t include us messing things up by rejecting him) or think it’s someone else’s responsibility to take care of the situation… Jesus lovingly dresses our wounds; carries our broken bodies; cares for us and pays the debt to bring us back to full health.

By our receiving Jesus Christ – in His Word and His Body and Blood in the Eucharist, we have no time to philosophize over the evils of the world, but are charged to become who we have received – to become Jesus and to do the same to the brokeness that continues today.