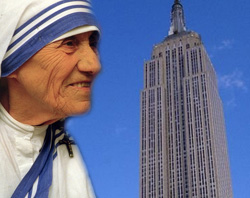 Hi everyone, here’s my homily for the 11th SUNDAY IN ORDINARY TIME – June 16, 2013.  The readings for today can be found at http://usccb.org/bible/readings/061613.cfm .  Thanks as always for reading and your sharing, feedback and comments.  God Bless – Fr. Jim

A few years ago, the owner of the Empire State Building found himself in a bit of a controversy that turned into quite a media-storm in the NY metro area.  Perhaps it was because it was the middle of the summer and there wasn’t a lot else to get fired up about, but it was a few months before Mother Teresa’s 100th Birthday.  To mark that occasion, a request was made that the lights of the New York City landmark be turned to the colors blue and white, the colors of the religious gown of the Missionaries of Charity, the community that Mother Teresa had founded.  It didn’t seem to be such an extraordinary request.  As the managers of the building state on their website – “The… towers lights recognize key milestones, events, charitable organizations, countries and holidays throughout the world,” but it seems that the one phrase at the end seems to be the sticking point – “not political or religious related events.”

There was quite a lot of disapproval as critics point out that the lights on the building have been changed for celebrities like Mariah Carey; government leaders that are controversial (to put it mildly) from countries like China.  When people see instances like that compared to how beloved Mother Teresa is among people from almost every religion, every walk of life, the decision seems baffling.

Yet, on another level, there was a part of me that was kind of surprised by the reaction of those in the pro-Mother Teresa-lights group.  Because I thought why should we even care?  Why would we look for admiration, respect or even honor from the things that are of “this world.”  In a sense, do we want Mother Teresa’s selfless life of dedication to Jesus Christ, to His   people and service to the people that the world has little to no use for to even be put on an equal level as those tributes to the Chinese leaders or a pop-icon?  Why do we get so worked up when the things that are of Christ are not respected by the things of this world?

Because it was no different in Jesus’ day and age, as we hear in today’s Gospel.  This Pharisee has invited Jesus to dine with him.  You have to wonder what the motivation on his part was.  It’s obvious he had heard that Jesus was causing a bit of a stir, that there was a ‘buzz’ about him around town.  People were saying he was a “prophet,” so as a Pharisee – someone who yielded some power and influence in the Jewish world , he wanted to check Jesus out for himself.  So Jesus comes to his home.

As He’s there for dinner, a woman, labeled “sinful” in the Gospel – which must mean people knew who she was and what she had done wrong – she hears that Jesus is there.  Something draws her to want to see Jesus; wants to touch Him; wants to experience relief from this pain, this shame that had been weighing her down.  She probably wasn’t quite sure what that “something” was which was drawing her to Jesus.  Maybe she had heard him preach, or knew someone who had been touched, been changed, been transformed by an encounter with Him and so she goes, she enters the house, she weeps, she touches his feet in a tremendous sign of humble love.

The Pharisee looks at this with disgust; probably thinking things like: “So much for this Jesus being a prophet… if he was, he’d know who she was and what she’s done and that she doesn’t deserve to be in the presence of holy people.”  Yes in the world view of the time, it was okay to be incredibly self-righteous and judgmental rather than commit  the sinful deeds of the flesh this woman had committed.

Yet Jesus calls us to make a choice – are we going to serve the Master of this world, look to conform, fit in and even be honored by the rulers of this world; or do we follow Him, serve Him?  Is His Love, is serving Him enough of a reward?

The “sinful woman” who had obviously gotten caught up in the things of this world and then been rejected and abused by those things had come to see in Jesus a Master who’s desire to love is demonstrated most powerfully in sharing the merciful forgiveness of the Father.  As He gives this gift of forgiveness, He never counts the cost or says “okay, I’ve given it to you before, you’ve had your turn now, sorry, it’s someone else’s turn.”  He simply gives it to us over and over with the hope that once we’ve experienced this tremendous love, we in turn live it, share it, unleash it to the world around us.  Helping others recognize that the “Masters of this world” have nothing on our one true Master.

It would be interesting if we could find out what Mother Teresa thought about that controversy over her birthday and the Empire State Building.  The way she selflessly served the poorest of the poor, you have to wonder if she even made time to celebrate her birthday each year she walked on this earth.  And, while she graciously accepted awards and honors (like the Nobel Peace Prize) she only did that because it helped glorify God.  It wasn’t that it was important to her personally.  For her, all that mattered was Jesus Christ – and serving and loving Him

May the “sinful woman” from today’s Gospel who’s transformed by the forgiveness Jesus generously gives; as well as Mother Teresa remind us that we shouldn’t be looking to fit in, to conform or be admired by this world.  Not that we should go out of our way looking for ways to be hated.  But rather, may we come to know and realize this life-changing truth: That  when we experience the radical love of Jesus Christ ourselves – we know that nothing else can fill the longings, the desires, the needs that we carry.  And nothing else, not the respect of a “religious” authority at a dinner, nor the beautiful lights of a skyscraper in Manhattan in NY  matters.