As some of you know, for the past two weeks (with one to go) I’ve been down in Ave Maria University in Ave Maria Florida serving as a Chaplain at FOCUS – the Fellowship of Catholic University Students Staff Training.  It’s been a true joy for the past three years to be able to spend these weeks with so many beautiful young men and women as they prepare to serve on campuses throughout the nation.

Well tonight, after celebrating the Vigil Mass, this little girl – maybe 4 or 5 years old — came right into the Sacristy past these two big guys who were altar servers looking for me.  One of the missionaries who was the server for that Mass took the picture and posted the following:

That awesome moment when a brave little girl “really really wanted a blessing badly” during Mass, but couldn’t so she came and found Fr Jim Chern to get her own blessing after mass in the sacristy.

And here’s the picture: 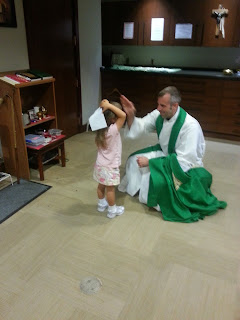 As she marched out and said “Thank You Father” – I was thankful once again for God’s gift of the priesthood and the sweet reminder this Father’s Day how with the gift of celibacy I’ve been blessed to be a spiritual father to so many children of so many ages.