Hi everyone – here’s a homily delivered at Ave Maria University, Ave Maria Florida at FOCUS New Staff Training – on Monday, June 3, 2013.  The readings for today can be found at http://usccb.org/bible/readings/060313.cfm.  Thanks as always for reading, sharing and your feedback!  God Bless  – Fr. Jim 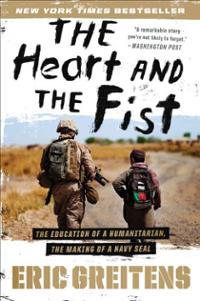 A couple of years ago, an author visited our campus to speak about his new book.   Just the title was intriguing – “The Heart and the Fist: The Education of a Humanitarian, the making of a Navy Seal.”  The author, Eric Greitens  had studied  at some prestigious institutions like Duke and Oxford, became a Rhodes Scholar, spent time outside of the classroom on mission experiences that brought to places of great need like Rwanda and Croatia and then  decided he wanted to become a member of one of the most specialized military forces – the United States Navy Seal.  He gave such an incredible presentation that even though I have a pile of books that have collected dust and not been opened, it just seemed to be a “must” read.
One thing that has always fascinated me – whether it’s the SEALS or the Marines or some other elite military group – is what these individuals endure physically and mentally to complete their training.  To have whatever it takes to become a SEAL.  They go from some minimum goals like having to complete a mile and a half run in 11 minutes to doing some seemingly impossible, grueling and increasingly difficult challenges for 12 weeks of training, culminating in the appropriately named “Hell Week” in order to become this warrior.

It’s something few will succeed at.  I think Mr. Greitens said that his class started with 200 candidates — in the end only 21 would graduate. And Greitens was able to pinpoint the major reason, the difference between those who would make it and those who wouldn’t.  While obviously a person needs to be in good physical shape, one of the essential components is the guy’s head.    The thoughts of the candidate would determine if they had the mindset to go all the way.

Jesus shatters that theory, not just in this parable, but even more, on the cross.  In the cross, Jesus puts aside arguments, debates, words, miracles and in that act makes a final appeal to the closed minds and hearts of humanity. Like the men training for the Navy Seals, the decision rests on us though.  Will we throw in the towel, ring the bell and decide we can go no further, quit and go off on our own?  Or are we willing to go all the way with Christ?  Knowing that becoming Jesus faithful disciple starts with a decision in our minds to continue to follow Him, wherever he asks to go, and allow Him to transform our lives?