Hi everyone, here’s my homily for the Solemnity of the Most Holy Trinity – SUNDAY – May 26, 2013. The readings for today can be found at http://usccb.org/bible/readings/052613.cfm/ Thanks as always for reading, sharing this blog and your feedback and comments. They’re always much appreciated! Fr. Jim 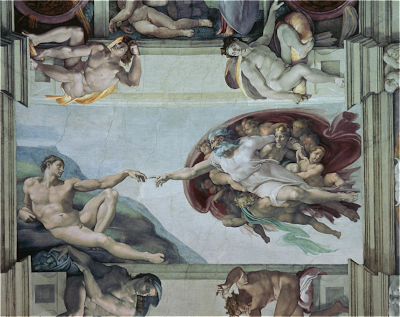 Recently I came upon a website called http://whyimcatholic.com/– which is pretty self-explanatory. It has posts from people from all walks of life who share their stories of faith. And it’s hard not to be drawn from one story (or, rather, ‘testimony’) to another. What inspired me the most was reading stories of those who were “atheists” who then became Catholic.

One such story was from Jennifer Fulwiler, who for most of her life considered herself an atheist.  Believing there was no God, and that there was no meaning to life – even to the point of reducing the things people call heroism or glory or any other great human achievement as simply coming from the firing of a particular neuron in the brain.  Her disbelief, seeing Christianity as simply a fairy tale, she traces back to her father.  She explains, “My dad, [the] parent from whom I got my religious views (or lack thereof), had not raised me to be an atheist as much as he’d raised me to seek truth fearlessly. ‘Never believe something because it’s convenient or it makes you feel good,’ he’d always say. ‘Ask yourself: Is this true?'”

That question kept chasing her, gently, yet unrelentingly. First, as she met and fell in love with her husband, Joe, who, although a Christian, didn’t seem overly invested in his faith.  Then as she became pregnant with her first son. After his birth she couldn’t help but start to see this transcendent value in her son’s life, so that, eventually, her old thoughts of life’s meaninglessness didn’t seem to make sense anymore. Perhaps there was a “spiritual realm” after all. Months later, she stumbled upon a Christian book written by a former atheist. Curiosity got the best of Jennifer.  Even though she thought this author had come to the wrong conclusions, she respected that he was able to explain his beliefs not on emotion but through reason.  She was more intrigued and confesses:

I had never seen Jesus as anything other than a silly fairytale figure whom people called upon to give a divine thumbs-up to self-serving beliefs; but now I was intrigued by the man as a historical figure. Something happened in first-century Palestine, something so big that it still sends shockwaves down to the present day. And it all centered around the figure of Jesus Christ. As Joe once pointed out when I asked him why he considered himself a Christian, Christianity is the only one of all the major world religions to be founded by a guy who claimed to be God. That’s an easy claim to disprove if it’s not true.

That’s what caught her off guard, her father’s question– what if it is true. After reading the masterpiece of Christian literature – Mere Christinity by C.S. Lewis – she found herself reading the Bible, trying out different Christian denominations (after being initially convinced there was no way Catholics were real Christians, thinking that Catholics were part of an “archaic, oppressive and sexist institution”) But she was stumped to find herself more and more pulled into Catholic theology, saying, “The more I read about Catholic theology, the more sane it seemed.”  Even the more controversial teachings regarding abortion and contraception, the more she read and investigated, the more she saw the truth of the Church.

Eventually this pursuit led to her wanting to follow “the Church” but some of those controversial teachings came into conflict with her own life and her own story. As she was starting to slip back towards atheism and she was starting to give up the whole idea of becoming Catholic, she realized that thing she was accusing religious people of doing – basing their faith on emotional things rather than ‘what is true’ – she found she was doing that same exact thing with her atheistic tendencies. She had been more convinced of the “truth” of Catholicism, but was allowing an emotional, physical and moral crisis make her want to abandon truth because it was going to make her sacrifice too much.    That realization struck her, and she was able to summon the strength to enter into the sacrifice, foregoing what was comfortable to her – the life she had lived – and she began to live as a Catholic, faithful to the Church’s teachings – simply as a way of trying it out so to speak.  From that this atheist and her Protestant/not practicing husband entered into the RCIA, the formation process to become Catholic, where she finally found the “emotional experience” she had often dismissed in those she previously thought of as ‘religious wackos.’ “The darkness within me was simply not there anymore. In its place was peace, and an unmistakable feeling of love. For the first time, I felt the presence of God.”

The presence of God. At its core, that’s what today’s celebration – the Solemnity of the Most Holy Trinity – is all about. Our search, our desire to have that encounter with God.  Not trying to explain away the mystery of how one God is in three Persons, but rather allowing ourselves to be caught up in the mystery.

– Recognizing how, when we reflect on the search for meaning in life, we come to the truth of God, the Father, as Creator.

– Remembering how in our moments of struggle, in trial, the truth of God, the Son, brings us the opportunity to experience intimacy with the Lord that the human heart and soul longs for – because He suffered for us, first – He knows what we go through.

– And, when perplexed by our own self-awareness and our desire for answers, we see that the truth of God, the Holy Spirit, opens our minds and hearts in a way that compels us not to settle for the easy or the convenient answer, but pushes us, annoys us (as Pope Francis so accurately put it a few weeks ago) to choose the harder path that comes from being a person of faith.

All these attributes are different; yet they all are the same.  They have the same Source; one grace comes from, and leads to, the other.  The Trinity that we adore is one God – the first line of our creed reminds us of that.  The three Divine Persons – although distinct and really Persons in and of themselves – form a Unity, in a way we cannot fully understand.  But we can grasp that the creative, redemptive and inspirational aspects of the Trinity’s members are shared by them all.

That one Person is not kinder, or greater, or more loving than another;
that one is no less real or responsive to our own love.

And if your heart overflows with love for one, yet hesitates over the other two, give yourself permission to love all of them like that.  Because there is no plurality, no ‘all of them,’ in the end.  Three Divine Persons, yes, but so united that,

Christ came down to earth to redeem us – and the best part of that redemption is the marvel that the lavish love He showed for us is not just His alone, but the love of His Father, and of the Spirit they sent us.

As we celebrate this Eucharist, caught up in our encounter with the Triune God in whose honor we sign ourselves – Father, Son and Holy Spirit – may all that we’ve come to know as true about God continually cause us to fall deeper in love with Him. So that the reason “why I am Catholic” is the mystery, the truth, and the presence of a God that we know and experience, both in the head and the heart.