Hi everyone, here’s my homily for the SIXTH SUNDAY OF EASTER – May 5, 2013. The readings for today’s Mass can be found at: http://usccb.org/bible/readings/050513.cfm . As always, thanks for reading, sharing, and commenting on the blog. God Bless, Fr. Jim 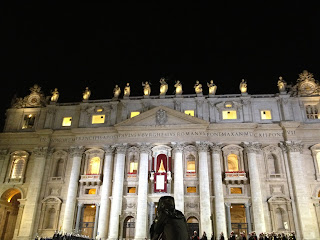 I really love Pope Francis. Shocking news, I’m sure… That’s not just because I was there in Rome, standing front row the night he was elected Pope (although that was an amazingly awesome experience). Nor does this diminish my love and admiration of Pope John Paul II – the holy father I knew for most of my life, nor of Pope Benedict – one of the greatest theologians and humblest and gentlest men to ever be the successor to St. Peter.

But the thing about Pope Francis that’s been so unique and, I think, has endeared him to so many is he’s relatable. He has a casualness that is so approachable.  And because, unlike his predecessors, he only speaks Spanish and Italian, and his style is to often preach without a prepared text, he is speaking from the heart. . The night he was elected and first came out to the balcony to great the hundreds of thousands of people waiting to see who would be the next Pope, his first words were a joke:   You all know that the duty of the Conclave was to give a bishop to Rome. It seems that my brother Cardinals have gone almost to the ends of the earth to get him… but here we are.

It’s just so cool. Which is why I’ve enjoyed reading his homilies. Usually there’s not official texts, or prepared translations of his homilies, so you have to read various translators’ versions of what he said if you don’t understand Italian (after 4 years of Italian in high school I’m embarrassed how rusty mine is). He’s speaking so conversationally, which has the ability to shock and surprise us.  For example, a few weeks ago he said in a homily something that, if you take the one sentence out of context, would be cause for concern – he said the Holy Spirit annoys us.  I was like, did the Holy Father just say the third person of the trinity annoys us? He did, but the whole quote probably fleshes it out a bit more: 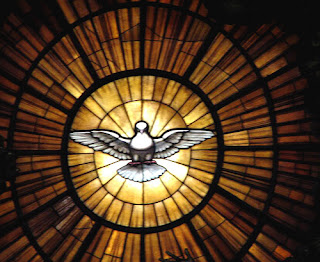 The Holy Spirit annoys us. Because he moves us, he makes us journey, he pushes the
Church to go forward. And we are like Peter at the Transfiguration: ‘Oh, how wonderful it is for us to be here, all together!’ But let it not inconvenience us. We would like the Holy Spirit to doze off. We want to subdue the Holy Spirit. And that just will not work. For he is God and he is that wind that comes and goes, and you do not know from where. He is the strength of God; it is he who gives us consolation and strength to continue forward. But to go forward! And this is bothersome. Convenience is nicer.”

These words have particularly resonated with me the last few months. Back in January, the Archbishop called me into his office and told me he was considering moving me out of campus ministry into the Office of Vocations.  It was something I did not want, did not ask for… Something I was anxious about, just listening to the Archbishop describe it in our conversations. And it was something that the Archbishop remained undecided over for a couple of months.  Because the Archbishop said he was happy having me here at Montclair State as well as stay Director of Campus Ministry… But that he kept coming back to this idea of assigning me to Vocations. He kept saying – let’s keep talking and praying about this.

In truth my prayer was, ”Let this chalice pass me by Lord.” As challenging as this work can be, I love it.  Each year presents new and different experiences that have definitely stretched me as a person, and especially as a priest. But I know that I made a promise of obedience to the Lord, to His Church – and one way that is expressed is my obedience to the Archbishop (whichever Archbishop it is that the Lord sends us).  So I couldn’t figure out why he wasn’t making the final decision and say, ”OK, I’m moving you.” He kept hesitating on it.

One morning as I was praying my Holy Hour – I kept having this thought, ”Perhaps you could continue on as Campus Minister at Montclair and be the Director of Vocations…” I shook my head and resisted, thinking ”That’s crazy… they’re both full-time jobs – it would involve a complete restructuring of things for both offices, plus there’s no way the Archbishop’s going to go along with that.” In this interior dialogue in my holy hour, I said ”Well before I waste anymore time arguing with myself over whether this is a good idea or not, maybe I should ask the Archbishop if this is something he would even be open to, since these are his assignments to make, not mine to take.” So I sent an email saying, tentatively, ”This was a thought that came to me during my holy hour, before I keep praying on this, I wanted to see if the Archbishop would even be open to considering this as a possibility.” Not two hours later I got an email saying, ”OK that sounds great… let’s go with that.”  Wait – what??? Uhmmm… - Like Pope Francis said ”The Holy Spirit is annoying.”

I share that because we hear in tonight’s Gospel Jesus telling us that He and the Father will send us the Advocate – the Holy Spirit who will teach us everything and remind us of everything right before he says Peace I leave with you, my peace I give to you – not as the world gives do I give it to you. Which is why it so often appears annoying when the Holy Spirit gets involved in our lives.  Try as we might not to, we often think of Peace in the way that many in the world would describe it — as the absence of conflict, to be comfortable, not to rock the boat, so to speak… And when we apply it to our following Christ, we start to tell ourselves – I’m praying, I’m trying to avoid sin and be a good person (and even go to Confession when I do sin) I go to Mass on Sunday – so why is peace still so elusive?

I’m thinking of a lot of questions that various people have shared with me over the last few months – ”Father, I know some of the people I’m working with are doing some horrendous things – I know I need to blow the whistle on this, but I’m scared because I could lose my job, it’s going to create a real mess… I feel so stressed…”  ”Father, I know I’m called to the religious life, I’ve never felt what I’ve felt each time I visited that convent, but I have to somehow pay off my debts from student loans to do it… how am I going to raise $40,000? (by the way, as of Friday, within only three months, she’s raised a third of that already).  ”Father, I know that this guy isn’t the best guy for me and I’ve thought about breaking up with him, but I’m afraid there’s not going to be someone else for me and I’ll never get married.”

If we truly, sincerely, genuinely want to Love Jesus, we have to allow His Advocate, allow the Holy Spirit to dwell within us… To annoy us… To confront us… To challenge us… To move us, out of our comfort zones and comfortableness. To desire Christ’s peace which crushes the illusion of security we so often settle for in favor of the fullness of life that comes from following His will in every aspect of our lives. To remind us of the depth of Love of Christ crucified for you and I; to teach us Christ crucified is the meaning of Love – which isn’t simply a warm fuzzy feeling I have when I’m attracted to something I like or desire – but when we die to ourselves and live for others, for God alone, that is Love.   What is the Lord annoying you with… nudging you about that’s calling you out of indifference, apathy?   Challenging you out of the ordinary into something different? Bringing to mind and heart something bigger, bolder – that the devil is trying to lie to you into inaction?  How is the Lord calling you to listen to and respond to His seemingly unfathomable, radical calls to move forward?  To truly embrace that call to love and die to self and live for Him alone?  It’s only in responding to those calls that we begin to experience the peace that was so seemingly elusive, as we freely begin to follow where the Holy Spirit leads us.

Pope Francis, in that favorite homily of mine, went on to say:

May you and I desire, pursue, and finally be open to that Freedom that comes from obedience to the Holy Spirit – lovingly annoying us to experience the Peace that God alone can give.