Latest News
Home /Blog/ARE YOU A THERMOMETER OR THERMOSTAT? 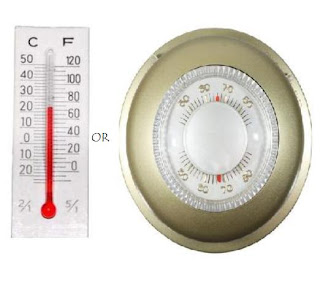 Hi everyone, here’s my homily for the FIFTH SUNDAY OF EASTER – SENIOR SEND OFF APRIL 27, 2013.   Tonight is our Annual “Senior Send Off” Mass for the students at Newman Catholic who will be graduating, so the homily was a bit more directed towards the graduates, but hopefully it will be meaningful to all.  As always, I appreciate your reading and commenting as well as all the shares of the blog on facebook, twitter and elsewhere.  God Bless You!

The readings for today’s Mass can be found at: http://usccb.org/bible/readings/042813.cfm

It’s a question that comes to all of us in different forms and ways throughout life, but most especially it is posed to College students a lot.  Which makes sense… If you (or your parents) are paying thousands and thousands of dollars each semester to be here to prepare you for the rest of your life, it’s good to reflect on “what do you want to be” to help you focus on your dreams, your goals and to give you the tools to help you pursue them.

A few months ago Curtis Martin, the President of FOCUS (the Fellowship of Catholic University Students) at their national conference for College Students posed a variation of that question:  He asked what do you want to be and gave two options.  Do you want to be a thermometer or a thermostat?  Do we simply want to get a “read” on things; “fit in” not rock the boat, not make any waves… simply take the temperature of the room like a thermometer and adjust ourselves to the environment we’re in?  Or do we want to affect change, be the change… Do we want to go into a place and bring something to that place that will change the temperature…that will make it different because of us – like raising the heat and  being a thermostat.

A vast majority of people throughout and in many aspects of their lives probably fall into the thermometer category. That’s how stores like Abercrombie and Fitch or Hollister stay in business.  They are professional thermostats.  They set a fashion trend and millions of young people around the world throw down $70 for a pair of jeans.  Steve Jobs has been deceased 2 years now and just think about t – how we communicate, how we purchase and listen to music has been forever changed – and now how we purchase and read books, newspapers has been altered by this “thermostat” as well.  Those examples are great ones… We don’t mind being a thermometer in those instances because most of us couldn’t come up with those things.  We need creative people to share their gifts and talents that we can all benefit from. There’s no way I could have ever imagined 20 years ago when I was in your shoes as a college student how different thermostats would’ve changed the world so much that my VHS tapes, CD’s are becoming like the vinyl records and 8 tracks that my parents had…

The problem is though, we can fall into the false belief that is our role throughout all aspects of life to be simply thermometers and let life continue to re-direct us. To let others, to let the culture, to let the media, to let all these outside forces set the temperature on everything.  We see countless examples of that around us –both on and off campus: “Diversity” “Inclusion” “Tolerance” “Equality” are terms that sound really great and in their most pure definition should be things that guide each and everyone of us. But the reality is that the way they are often used carry pretty clear expectations that if you don’t agree with the thermostat – get your thermometer out of here.  And it can be scary to defend yourself, your faith and your beliefs with those types of attitudes and forces coming down on you. Just a couple of weeks ago, students at George Washington University tried to have the Catholic Priest thrown off campus and the Catholic group as well because they were labeled “anti-Gay” for not supporting same-sex marriage. One of the most horrific trials in a US court room that has been going on for over 6 weeks, the trial of an abortionist named Dr. Gosnell, who killed babies not still in their wombs, which is horrendous enough.  No there’s testimony of people who saw him killing babies who were already born – yet while we still know the names of witnesses and intricate details from all sorts of trials (OJ Simpson?  Ted Bundy?) … there’s been scant coverage of this trial at all.  We can’t deny, there’s some very influential thermostats who have their agenda and are very clearly setting the tone in our world.

Do we just go along? Do we become defeatist and say they’re too influential, too powerful, too well-connected” that we can’t do anything to stop it or change it?

As I have loved you, so you also should love one another.
Yes, we are to imitate Jesus Christ.  And that has to be a clear, decisive choice.  It’s interesting because at the very beginning of the passage we heard – “when Judas had left them”- that’s not simply to provide historical or biblical context – that’s a telling line.  Judas was indeed going to be a diabolical thermostat that would set in motion some pretty horrific things that were going to change things pretty severely.  To the point that it would seem to many, especially those closest to Jesus, the horrendous end to their hopes and dreams.  But Jesus’ thermostat, infused with the fire of God’s Love, with the Fire of the Holy Spirit would not leave Jesus dead in a cold grave.  The unprecedented… the impossible… the never before experienced Resurrection from the Grave of Jesus Christ transforms everything.  And shows us the tremendous power that can be unleashed when we follow His loving example, and let that inspire our choices whether to be a thermometer or thermostat – to “raise the heat” ourselves.  Which we see the Apostles did in the Early Church as we read throughout the Acts of the Apostles.  They go from scared followers, timid thermometers to thermostats bringing the warmth of the Love of Christ to the ends of the earth.

What gives me great Hope tonight- (and that’s why I’m happy so many of your families are here is to congratulate them on the tremendous job they’ve done with each of you) is seeing how you’ve already started to do the same thing . In some significant ways… In ways that were difficult, painful at times… In ways that your peers, your faculty and maybe even some of your family and friends might not have always understood…you did it. I’m just thinking of a few stories I know about some of our seniors and students:

–    When you passed on a role in a performance that you were being cast in because it was vulgar and insulting to you as a person and you as a Christian. It might not have appeared to matter as people dismissed you and laughed at you and told you that you better grow up.  That significant act was a way you lovingly bore witness to who you were as a person, whose you were as a disciple and gently left a memory that no doubt unsettled those who were easily participating in things that are anything but beautiful, inspiring which is what the arts are truly meant for.

– When you gave up time over summer or spring break, time when many of your peers save up money to blow as they get drunk, get stoned, and do a whole host of other things – you fundraised, you gave your time and service to a mission trip. And more than likely it didn’t even go the way you planned or expected. But in that you experienced the love and presence of Christ in a way you’ve never have, that has changed your vision.

-When you recognized the double standard, the hypocrisy of the University with it’s anti-bullying, “respect for others”; zero tolerance against any and all forms of bias – do nothing in the face of these actions when you reported the fact that a professor made very untrue, unacceptable attacks on the Catholic Church.  Instead you stood up, you refused to be bullied, you reported it, and you took a lower grade than you deserved (or transferred into another class)

Yes there’s many, varied ways that come to mind and touch my heart as I see how you guys, on a sometimes very cold campus, have warmed it becoming thermostats, changing the temperature around you by your being the Light of Christ.  Affecting change not through complaining, not through destructive ways – but in loving, sincere, genuine gestures and actions.

To our Seniors preparing to leave us… something that I’ve said numerous times to you rings especially true and I hope and pray is seared in your minds and hearts as you go forward.  You cannot not know what you already know. You’ve heard and experienced the Love of Christ. You’ve heard and experienced the need to be that Love. You know that’s not easy, that it’s often not popular or appreciated (in fact it’s often rejected and ridiculed) – but you know that He never abandons you, He never leaves you, and He never will – not now, as you prepare to leave Montclair behind – and not ever, no matter where you go, or where the Spirit leads you.

And as you listen to Him, as you let Him work through you in this wonderful life He has given you – in the end, you might not get a particular part, or a specific job you had hoped for – but He will lead you let Him.  He will guide you to be that thermostat, that disciple who will change the corners of the world he Has placed you in.  And even more, He will bring you true joy, true fulfillment – the very meaning of your life.