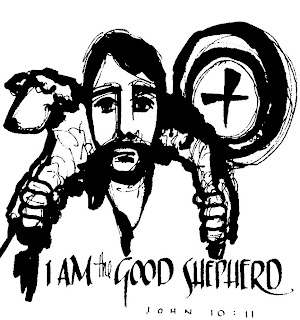 Hi everyone – here’s my homily for the 4th Sunday of Easter.  The readings for today can be found at http://usccb.org/bible/readings/042113.cfm.  Thanks as always for reading, all your feedback and comments and for sharing this post on facebook, twitter and emails.  God Bless, Fr. Jim

So try to imagine this hypothetical scenario – some guy comes up to you on campus tomorrow afternoon. He just sees you walking into University Hall or Dickson and just says, “Hey my name is Joe… I love sky diving and I know you want to go sky diving so why don’t you come with me to Tetterboro Airport today and we’ll go up in a plane and I’ll show you how to jump out of it” – how many of you would be ready to get in a car and go for it?

(Please God, no one raise their hands or we got even bigger problems)

YOU WOULDN’T. (Or rather YOU SHOULDN’T) That would be crazy!!! That would be insane.  Some random person just walking up to you on campus as you’re between classes and simply claiming to be an instructor thinking that you want to sky dive.   If you really were interested in sky diving, you’d research it out… you’d find out where people who’ve done it went… you would check out different instructors and their expertise. You wouldn’t simply listen to the voice of a stranger walking up to you on campus making some crazy claim.

I was thinking about that today. As we come for Mass on this fourth Sunday of Easter, we hear this somewhat short Gospel.  It seems somewhat tame… sheep, shepherds, taking care of them – nice gentle images… they all seem comforting.

All of those characteristics, all of those traits are true and they had already been verified. Up to this point in the Gospel of John Jesus proved those things.  He had turned water into wine, walked on water, fed thousands with a few loaves and fishes, healed a paralyzed man, cured a blind man… preached and taught and was attracting crowds who heard and saw and experienced who Jesus was.  And after all these signs and wonders, after all those words that opened hearts and minds, he makes this remarkable claim that is the dividing line:

The Father and I are one

Those few words, in that short Gospel passage say it all.

Jesus is God.  He tells us unequivocally that He and the Father are one.

If he’s not who he says he is; if he’s not God – then he’s a lunatic that deserves to be called out as a fraud – which is what some people thought, which is why he ended up like that, dead on a cross…

But for others who did see and experience all those miraculous events, those who did follow, those who were there at the foot of the Cross (as well as those who were scattered out of fear) those who saw him, talked with him, ate with him, touched him after he rose from the dead might not have totally understood the magnitude of that claim before the resurrection, (they knew it was a big deal since it really, really ticked a bunch of their fellow religious leaders out)  but after the resurrection, they sure understood it…There was no doubt any longer:

The Father and I are one…

And because of that experience… their entire lives were consumed with sharing His voice in preaching the Gospel and being His presence in the world by being living examples of the Good Shepherd to the world around them. To the apostles, they were given the command to continue to offer His Body and Blood in the Eucharist, bringing His bodily presence in the world.  In so many ways, all of the disciples, all of those first followers testified in the most dramatic, intimate way – with their very lives – to Jesus’ abiding presence in the world which we still hear today… still calling out to the world to grab on to the hand of the Father that He is reaching out to us.  To follow the voice of the Shepherd, calling out to his flock to follow Him and not be lulled by the evil one into following the ways of this world.

It’s perfect that this Gospel falls on this World Day of Prayer for Vocations, because we are asked not simply to pray as bystanders that God simply will bless us with more priests, and religious – with more clergy to continue to do that… but to prayerfully ask ourselves how are each and everyone of us responding to God’s commission to spread His word, to be His presence?

Do our lives bear witness that we believe what Jesus says…

That Jesus is God. And because of that fact, we strive to hear his voice, listen to his voice, and follow what He says?

Do we allow him to challenge us on our paths? Are we open to the new journeys, the new horizons that he places before us? Do we hear the question, “Have you ever thought of being a priest, a religious sister” and immediately dismiss it or could we let it sit there and see if it resonates even slightly in our hearts that perhaps we can dig deeper on that?  Or at the very least let that be a moment where I offer sincere prayer that someone I know or love might be called and then offer them my support.

Do we strive to, in whatever state of life we are, to follow Christ so that people will be able to see we are indeed His people…that our offer for them to join us in following Christ won’t be seen as a reckless act (like jumping out of an airplane with a stranger who may or may not know what he’s doing), but rather like an invitation from a friend, introducing them to the one who offers us eternal life?