Latest News
Home /Blog/POPE’S RETIRING? WHATS UP WITH THAT? 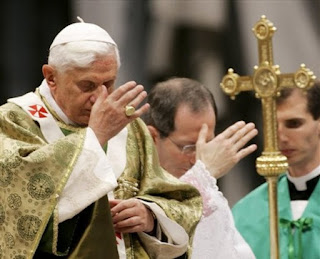 The Pope is resigning?

As the cartoon character of South Park fame, Mrs. Brovlowski would say – what, what what???

That was my initial thought…along with a wide array of random other thoughts with this surprising news this morning that Pope Benedict XVI is planning on stepping down from the Seat of St. Peter as of February 28th.

I’m flattered that so many people have sent me text messages asking if I’m being considered, or more seriously, “What’s up with that?”   Because I keep saying some of the same things over and over, I thought I’d put some ramblings down to paper, err… blog, so, here’s what I got (and thanks for caring to even wonder)

As you can tell by the spastic media who never like to be surprised or not in the know (and have now tried to speculate every conceivable reason for this decision) this is definitely unprecedented for our day and age.  Especially for people in my age group who have little to no recollection of a Pope before John Paul II.  We grew up with Pope John Paul II, and loved him.  As years went by, we watched him age and deteriorate, and mourned his passing like we did our Grandfathers.

I can’t say I was completely shocked or surprised with Pope Benedict’s decision to retire or resign.  I remember back some years ago when then Cardinal Ratzinger making headlines while Pope John Paul II was still alive for saying that there’s nothing to prevent the Pope from resigning due to ill health or advanced age.  When that was reported, of course some in the media were speculating that it was a not so subtle jab from Cardinal Ratzinger to the Pope  -hey you should step down.  Which was ridiculous.  Ratzinger’s love and admiration for John Paul II remains to this day.  Back at Pope John Paul II’s beatification, he shared these personal words:

I would like to thank God for the gift of having worked for many years with Blessed Pope John Paul II. I had known him earlier and had esteemed him, but for twenty-three years, beginning in 1982 after he called me to Rome to be Prefect of the Congregation for the Doctrine of the Faith, I was at his side and came to revere him all the more. My own service was sustained by his spiritual depth and by the richness of his insights. His example of prayer continually impressed and edified me: he remained deeply united to God even amid the many demands of his ministry. Then too, there was his witness in suffering: the Lord gradually stripped him of everything, yet he remained ever a “rock”, as Christ desired. His profound humility, grounded in close union with Christ, enabled him to continue to lead the Church and to give to the world a message which became all the more eloquent as his physical strength declined. In this way he lived out in an extraordinary way the vocation of every priest and bishop to become completely one with Jesus, whom he daily receives and offers in the Church.

It’s obvious Benedict loved and admired Pope John Paul II and was even inspired with his determination to serve until the last moment of his life.

Quite simply we have a different Pope.

Pope Benedict recognized that his election to the papacy at age 78 would make this, as he called it, a “short” papacy.  (As it turns out, 8 years, while shorter than John Paul II’s 26 years is by no means “short”) He expressed his personal shock at his election and how he had feelings of reluctance and hesitancy when it appeared to be moving in that direction.    But he knew the Lord had called him to assume this role at this time.    He expected his papacy to be “transitional” – another way of saying “short.”  Having Pope John Paul II for 26 years was a bit unprecedented as well.  So that the Cardinals through the inspiration of the Holy Spirit would pick a man in his late 70’s seemed to indicate that as a Church we were still absorbing all that John Paul II did for us as our Holy Father.  Since his death, we still miss John Paul II  – which is why his tomb remains one of the most popular sites to visit in St. Peter’s Basilica, rivaling St. Peter’s tomb itself.

Benedict being a long time collaborator and friend to John Paul II was a consoling choice to us who loved JPII.  He provided comfort that in this fast-moving, quickly changing world to those of us who looked at John Paul II as our Holy Father and not simply an “authority figure” or whatever other caricature is sometimes attributed to the Pope.  He did that in his humble, somewhat quiet, unassuming demeanor.  He did that in not trying to be Pope John Paul II, but being himself.  And leading, and teaching the Catholic faith as his unbroken line of successors have done in a way that was needed and appropriate for these very bizarre and rapidly changing times we’re living in.

Being the brilliant and selfless Church man that he is, who is reading the signs and the times (as the Church is called to do) he took stock of where things are moving, what is happening and the needs of the Church and felt that we need a new Shepherd.  One who would not be so constrained by age or slowing down due to health issues.

Personally, I’m saddened with this news.  But it’s solely on that level – personal.  Because I have grown to love and admire Pope Benedict in a way I never thought possible after having such deep love and admiration for John Paul II.  Which I suppose is one of the gifts I take from this papacy.  To be reminded that in the Pope, the Lord continues to raise up the next “Peter” to be the rock on which His Church is founded.  To see how generous the Lord continues to be that we have been blessed with such selfless, generous, sacrificial men to serve as the first Peter did in service to Jesus Christ 2,000 years ago.  And to have a unique experience where we don’t have to be weighed down with mourning as we anticipate who the Lord will raise as the next successor.

Pope Benedict XVI – thank you and may the Lord bless you with many years of health and joy in retirement.