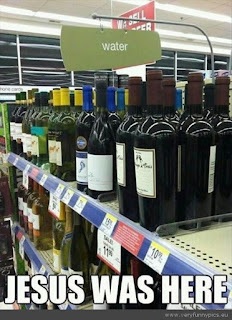 Hi everyone – here’s my homily for the SECOND SUNDAY IN ORDINARY TIME – January 19, 2013.  The readings for today can be found at http://usccb.org/bible/readings/012013.cfm .  Thanks for reading, sharing and your feedback… Thanks and God Bless – Fr. Jim

Here’s a gospel story that I’m sure a lot of people are thinking “Now we’re talking!”  We don’t have a gospel where we feel challenged by something.  Or calling us out on things.  No we hear the story of what happened at the Wedding of Cana, and think – yeah… that’s pretty cool.  It’s pretty cool because we hear Jesus doing his first recorded miracle and what makes it even cooler —- is that miracle involves Alcohol.  Nice, huh?  Not to take away from those other miracles, you know, the ones were Jesus cures someone of a life-threatening illness that isolated the person from the rest of the community or even when Jesus raised someone from the dead… because those are pretty cool – no those are beyond cool.  Those in many people’s minds are THE DEFINITION of miracles.

This story, is pretty cool because we have Jesus at this major party; this wedding.  And in those days, there was no honeymoon (no Carnival Cruise ships or Perillo tours yet) so this was the honeymoon.  It’s something the whole town was at, was looking forward to – there wasn’t a lot of joyful celebrations for the people of Cana in the 1st Century – things were kind of bleak, so this was a major deal. Jesus and his disciples are there enjoying the party – which is pretty cool in itself, isn’t it?  He’s just there, celebrating- eating, (oooh) drinking, maybe even singing or dancing.  Just another guest having a great time with everyone else.  And before you know it -there’s panic at the disco –  there’s a major crisis.  Everyone getting food sick?  No- the crisis?- they’ve run out of wine.

Now part of me thinks that only my beloved college students would see a crisis with running out of alcohol at a party.    For most of us – well I probably should take myself out of that – for a lot of people, okay, they’d see running out of alcohol at a party as embarrassing, but… they probably think “what’s the big deal?”   BUT – Back then it WAS a pretty big deal.  The whole festive atmosphere that had been there would have ended.  It would have been last call right as the celebration was starting.  For the newlyweds, their moment of joy and excitement and happiness would have turned to embarrassment and even shame as the guests – their friends, relatives and neighbors kind of looked at each other and said “well… I guess that’s it… I guess we should just go home…”

Because many of us have heard the story before, we kind of imagine that Mary is basically going to Jesus and expecting him to make some wine.  I kind of imagine this like when you there’s some kid at a party that can I don’t know – maybe sing really well and their incredibly, almost obsessively proud mother is there going up to their son or daughter saying “look the entertainment didn’t show up, you go up and sing…”  The kid is like “Oh mom…” and the mom just turning to the guests and saying “don’t worry everybody, wait till you hear my child how they can sing.  Go ahead SING.”  So, if you’re like me, and you have that in your head – you kind of see Mary saying to the wedding guests “no wine?  — don’t worry wait till you see what MY SON CAN DO – Go ahead Jesus…”

Go ahead and do what?

I think we can let this story get away from us a bit.  We kind of assume that Mary is going to Jesus simply because they are out of wine and she wants him to be like some magical-wine distributor.  But Mary is not just this proud mother looking to show off her son, expecting Jesus to fix this wine shortage.   That kind of diminishes their relationship.   She is going to Jesus because she loves and cares for the newlywed couple, for the guests, for all the people there.  She sees what’s happened, she knows how these things can go.   That, sadly, guests – even family and friends, can be judgmental –gossipy (did you hear what happened at that wedding last week???).  And this day for this newlywed couple which should be a happy day can quickly be ruined.    But what does she expect Jesus to do?  Remember, he hasn’t done any miracle before, so who knows what she was hoping that Jesus could do:  Maybe she imagined Jesus would speak a word to the crowds that would diminish the embarrassment people felt.  Maybe she thought Jesus could talk to people to get some wine there quickly.  It was obvious by the fact that Jesus already had “disciples” following him – that his words, his presence alone could do a lot.   She probably couldn’t even begin to imagine of what could he do, but she knew in her heart she had to go to Him.

She simply tells of her concern, points out what has happened to the one person she trusts and loves the most.  She tells Jesus the thing troubling her heart.  “They have no wine.”  In that short statement, all of the concerns were revealed.   Jesus’ response to her “Woman, how does your concern affect me?”  My hour has not yet come” isn’t a rebuff or rejection like an embarrassed child who’s been put in the spotlight by a talent-show mom.  Jesus is drawing attention that Mary the mother is also Mary the disciple. – The disciple simply trusts Him.  And so Mary says the words of the perfect disciple.  She says to the stewards at the wedding the words that we need to bold or underline or  highlight:  DO WHATEVER HE TELLS YOU.  Because this miraculous story, this first of Jesus’ miracles tells us that GOD IS ABLE TO WORK MIRACLES WHEN WE DO WHATEVER HE TELLS US.

We all want miracles.  Think of the minor, trivial ones we often think we want “Oh it will be a miracle of I get a parking space,” A snow day when I have a test I’m not prepared for… – yeah, things that in the grand scheme of things are incredibly trivial.  Especially when faced with real moments of trial, real moments of crisis, real moments of desperation.  Someone loses their job, someone is seriously sick… a relationship is hitting a real rough patch and neither person is sure what’s going to happen.  We find ourselves praying for miracles, real miracles then.  And like Mary we don’t even really know what to pray for, do we?

But whether it’s something thats catastrophic, or something that has been weighing on our hearts and minds for a long time – in all cases, Mary’s example and this gospel tells us it’s not about us going to God with our list of demands looking for answers to a specific problem that we want fixed in a specific way.   The Miracle of Cana isn’t just about a party where Jesus becomes possibly the greatest guest ever invited (making over 100 gallons of choice wine).

More than a party trick, or a pretty cool miracle, Jesus promises us that he is an active listener to our prayers.  He cares what it is that troubles our hearts, that concerns us.  If we can imagine that His ways can be better than our ways;  If we enter into our prayer not as saying to Jesus here’s my list of problems – fix them; If rather than just opening our mouths to talk – we can open our hearts and ears to listen, we will be surprised at how often God is able to work miracles in our day in our lives when we do whatever he tells us.