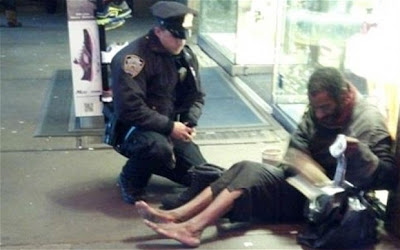 Hi everyone and Happy New Year – New “Church” Year that is.  As we celebrate today the FIRST SUNDAY OF ADVENT – December 2, 2012, we begin a new “liturgical year” where we will be hearing from (for the most part) from  the Gospel of Luke.    Today’s readings can be found at http://usccb.org/bible/readings/120212.cfm .  Thanks as always for reading, for your comments and for sharing this blog with others.  God Bless You!
Fr. Jim

Facebook has this thing called a “news feed” which has this constant stream of articles, statuses, posts that runs on the right side of the computer screen… For someone like me who’s very easily distracted it’s one of the worst additions they’ve made to the site.  And yes, I know, you can disable it… but now I’m kind of addicted to it and can’t bring myself to getting rid of it, although I probably should. But I was grateful for the news feed on Tuesday night.  That time, this picture flipped by that had caught my attention that I had shared it myself.  It was of a New York City Police Officer, and there he was squatting down next to a homeless man sitting on the street with his bare feet and legs exposed.    There was a short description of the picture provided by the individuals who caught it with their smart phone:  Jennifer Foster of Florence, AZ was visiting Times Square with her husband Nov. 14 when they saw a shoeless man asking for change. She writes, “Right when I was about to approach, one of your officers came up behind him. The officer said, ‘I have these size 12 boots for you, they are all-weather. Let’s put them on and take care of you.’ The officer squatted down on the ground and proceeded to put socks and the new boots on this man. The officer expected NOTHING in return and did not know I was watching. I have been in law enforcement for 17 years. I was never so impressed in my life. I did not get the officer’s name.

The story went viral for several days online to the point that within two days over a million people had seen and shared the story on facebook.  At that, the curiosity of the press to verify if this was indeed a true story, and even more who was the anonymous police officer who did this generous act got their attention.  By late Thursday night they had confirmed that the encounter was completely authentic.  Police Officer Lawrence DePrimo had been working a counter-terrorism patrol on 44th Street and Broadway.  It was a bone chilling 20 degrees when the officer happened to observe some people laughing and joking at this poor man who had no socks or shoes on.  The police officer went up to him and asked “where’s your shoes?” and the poor man said “it’s okay Officer, I never had a pair of shoes.”  At that, Officer DePrimo went into a shoe store a couple doors down, said “I want to buy a pair of socks and boots – something that’s going to last awhile.”  He put out $75 of his own money purchased them – went outside, knelt down and put them on him as the homeless man… The guy was  overwhelmed by the unexpected act of kindness and generosity which made him smile ear to ear.  The officer helped the man stand up, and invited him to have some coffee to get something to eat – which the man simply said “God Bless You – Be safe… I love the police.”

Officer DePrimo didn’t even notice that the entire episode had been captured by the tourist on their iPhone… that it had been shared two weeks later on Facebook and then becoming an internet sensation.  And there’s a part of him that wishes his actions had remained anonymous.  As he was being interviewed about this story on Friday, I hated to disagree with this hero as with all humility he contends that “he was just doing his job as a police officer.”   Because while its true police departments look for men and women of good solid moral character, I’m doubtful that part of a persons training to become a cop includes noticing a homeless person on the street; there certainly isn’t an expectation that you would take your own money and buy that person a pair of socks and boots, help him to put them on and then go back to patrolling the streets.

But for us as Christians – that is essential to our “job”, our duty, our responsibility in being a follower, a disciple of Jesus Christ.   Which is why the timing of the story is perfect as we begin this four week season of Advent.    In these weeks, the Church focuses on the words:  COME LORD JESUS.  It won’t be until the days before Christmas that we will reflecting on the historic, first coming of Jesus into the world in a manger in Bethlehem.  These earlier weeks of Advent causes us to reflect on the reality that we are people waiting for the end of the world, the end of all time, as well as the end of our individual lives (whichever comes first).  Rather than live in fear of that or anxiety over that, that’s meant to make us long for Christ, to desire Christ and Him alone.  In that the Advent them becomes words of prayerful longing– COME LORD JESUS .  That’s what this Gospel is talking about.  That especially when we see frightening things that cause us fear, cause us doubt, cause us anxiety… Jesus tells us to be steadfast in our faith “STAND ERECT – RAISE YOUR HEADS.”   So in that experience, that prophetic declaration becomes a call, a hope filled prayer from the hearts of his disciples: COME LORD JESUS!

But there’s a third dimension that this Gospel uncovers for us that is very much at the center of the season of Advent which is meant to be a refresher or a reminder for us.  Which is in recognizing how the LORD JESUS has already COME into our lives here and now.   We hear His word as these readings are being proclaimed anew to us here and now.   We receive His actual Body and Blood in the Eucharist – where we are to invite the Lord Jesus to come into our hearts, into our lives physically & spiritually and to stay there.  Those realities ought to make us look at this Gospel with a greater sense of urgency.

In this Gospel, Jesus says to “beware that your hearts do not become drowsy… and to be vigilant at all times.”  How do we do that?  By living selflessly, generously, lovingly always… at all times.    So often we can lose sight of that on a daily basis.  Yes, when Hurricane Sandy devastates our community, people respond incredibly generously to the crisis.  Or with the Christmas season approaching (no despite the insanity of Black Friday or Black Thanksgiving it’s not here yet) – people will participate in Toys for Tots, Giving Trees, giving donations to charity – which are all good things to do… But acts of selflessness and love are to be apart of our daily lives, our daily routines.  That is what makes Officer DePrimo such a great example.  Even though he’s become this celebrity for the moment (thankfully the media has someone else to fixate on rather than Lindsay Lohan) what was remarkable was what was captured seemed so unremarkable, so routine to the Officer DePrimo.

We too are called to live us people who know the LORD JESUS COMES to us here and now…With that knowledge, we are to attune our eyes, our ears, our hearts to the everyday opportunities that present themselves where we bring the LORD JESUS into the lives of those who are longing for His COMing right now.  Who is it in our workplaces that we can see are struggling (but we dare not ask) – who is it in our dorms, our classes that we see look sad or stressed or are alone – who is it in our lives that is longing for someone to bring to life the care, the presence, the love they desire that can only be found when the LORD JESUS COMES?