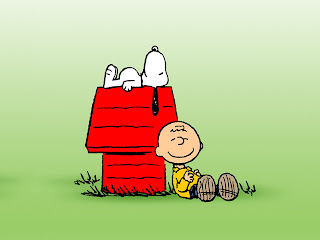 Hi everyone, here is my homily for the 25th Sunday in Ordinary Time – September 23, 2012.  The readings for the day can be found at: http://usccb.org/bible/readings/092312.cfm.  Thanks as always for reading, all the “shares” of this blog on Facebook and Twitter (kind of shocked each week when I see the numbers of people who visit everyweek…it’s so humbling!) and for your comments and feedback.  God Bless you!  Fr. Jim

Any visitor to my office or apartment would probably be able to get an idea of some of my interests with just a quick look around. Among obviously some religious articles and family portraits, there’s some Yankees paraphernalia, a couple bobble-heads from the TV show “The Office” (and no, I don’t care what you say, I don’t think I look like Toby) and a variety of things from the comic strip “Peanuts” (mostly of my favorite character, Snoopy).

Ever since I was in grammar school, I was a big fan of Peanuts… reading the comic strip daily in the paper, collecting books of old comic strips, watching every TV special of it.  I can still remember the day President Ronald Reagan was shot in an assassination attempt – not because of the tragic history of the day, but because it pre-empted a Peanuts special that was going to be on that night (cut me some slack, I was only 7 years old and in second grade and this was before VCR’s).

When I was in fourth grade, we were allowed to write a biography on anyone we chose. That was an easy decision – I read a book on Charles Schulz the creator of “Peanuts” and wrote a biography about him.  I decided, once our teacher had graded and returned the report, to mail it to Mr. Schulz (particularly since I had drawn a picture of Charlie Brown and Snoopy on the cover that was pretty good) .  Of course, in a manner worthy of Charlie Brown, I was out sledding after school one day when his office called our house.  The secretary explained she had misplaced my address and that Charles Schulz had read my biography (and pointed out that my teacher had incorrectly “fixed” the spelling of his name – I had it right, there was no “T” in Schulz, take that Mrs. Katchen).   Anyway, he was so appreciative, he wanted to send me a personalized picture of Snoopy, which I still have framed in my bedroom.

I’m still not quite sure what it was that made me such a fan of Peanuts growing up.   I mean compared with the comic-book characters that my friends liked – whether it was one of the super heroes, like Superman or Spiderman, or someone without super powers but ‘super,’ nonetheless, like GI Joe – Charlie Brown is this LOSER.  A lovable loser, but, seriously: 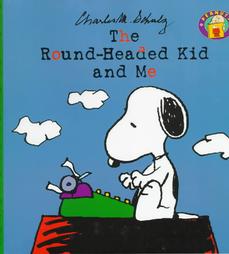 -the kid never gets to kick the football,
-never receives a Valentine or a Christmas Card.
-Heck for some reason on Halloween while everyone else gets candy, he is given rocks (?).
-Even when he flies a kite, there’s a “kite eating tree” out there to devour it.
-Even his dog, Snoopy, “Man’s best Friend” right, the one who has to depend on Charlie Brown to feed and care for him, even Snoopy can’t remember Charlie Brown’s referring to him as that “Big round-headed kid.”

It’s an interesting thing to try to do a psycho-analysis of a comic strip character and try to pinpoint what it is that resonates with me and millions (billions?) of fans. If I’m honest it’s because I could relate to Charlie Brown, a lot,  especially as a kid…I was not great at athletics, at all…   not popular, at all…  I was not feeling like I was “super” at anything that I could relate to GI Joe or Superman (if anything, I could’ve used their help on more than one occasion on the playground… ) – yeah, I could identify with Charlie Brown’s struggles.

But what makes Charlie Brown so endearing, is that you never really hear a jealous word out of his mouth.   The most frustration he utters is an AAUGH or Good Grief (see, he even is able to see something good in grief!).   One of his often quoted sayings is “Happiness is…” as he lists all the small things like “finding a pencil” or a “warm puppy” that brings joy into his life. 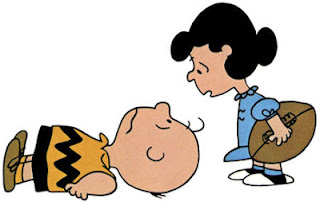 Charlie Brown  is a hope-filled character, who even though 10,000 times Lucy will pull the football away from him, that 10,001st time he still wants to believe it will be different –   or maybe, just maybe one day the Little Red Haired Girl might notice him… He embodies faith, hope and love in the midst of a sometimes mean world when so many others would give into despair or depression.

What is so distressing to the Jesus in this Gospel today is that these, his closest followers, his apostles have forgotten what “lovable losers” they really are – lovable in God’s eyes, but nonetheless losers in the eyes of the world – and instead of remembering that fact, have started to believe more in themselves than in Jesus, who was doing all those wondrous things in the first place.
They’ve seen his miracles.
They’ve witnessed massive transformations in human beings.
They’ve even participated in that mission – being sent to heal people in Jesus name.
They’ve just witnessed the transfiguration, (that’s where they were journeying from at the beginning of this gospel passage) that amazing day when  Jesus is transformed right in front of them, and converses with Moses and Elijah and they hear the voice of God revealing “This is my Beloved Son.”
They see how people are coming to Jesus in multitudes and have felt the excitement of being on a winning team, and all that has gone to their heads. So much so that they forget their lowliness, their weaknesses.  That’s what is going on as Jesus, explains how he is going to allow himself to enter into the Passion, the Crucifixion… listen to that again – Jesus is going to chose to allow himself to enter into that – He could have prevented it if he really wanted to…but He choses to still do that because he understands that the most common thing everyone of us goes through is that we all will have our Charlie Brown moments (if not worse) – everyone of us experiences suffering, experiences pain, experiences loneliness.. No human being is immune to these things happening at some point.

So Jesus shares with these men, who’ve experienced all of those things themselves, His revolutionary, new plan.  He’s saying:   Yes, I can work miracles… I can bring people back from the dead… but I’m going to enter into this experience to give people a reason to have Hope in the midst of all those experiences  – if they chose to have Faith in me and live in that love they will find me there…  And what do the disciples do? They forget all their lowliness, their own weakness– the exact places where Jesus first met them, in their ‘loser’ moments  and instead start arguing about which of them is the greatest!
Good grief.

Honestly, though, I don’t think Jesus minds the fact that the disciples want to be great disciples anymore than we would ‘mind’ that Charlie Brown wants to kick that football. But in that desire, they’ve allowed their human ambition to blind them from God’s direction, God’s will, God’s plan. Jesus’ reign, His kingdom will be established, one heart at a time.
As one person lays down his life for another.

As one person lets go of their ego, is no longer threatened by others, but is happy, just that the other is there.

As one person realizes that my lifting up of someone else, my helping someone else find their gifts and their greatness to offer back to God and the world doesn’t diminish me but helps me to achieve a deeper level of greatness that is tied into eternity…

Jesus turns it all around on them:  “You love me?” he asks. “You want to be great? “ he challenges.  Then be great by following my example.  Serve.  Take care of each other. Help those who are weak and in need, like little children.   Because that’s what greatness in Jesus’ world is all about.   When we are able to put our own desires aside, for His sake, as we help others.

Difficult to imagine?  Not really.  Difficult to accomplish.  Definitely. It involves a lot of hard work, namely, giving of ourselves.   But Jesus imagines and believes in you and me enough to know that it is possible  We can, despite how we look to the world, be ‘winners’ in the sense that when we serve each other, everyone wins.  When we do that in His name, it transforms us into something else, something more; it makes us into the men and women of God that He always intended us to be, people who find our greatness in service, our bigness in how we treat even the littlest of this world, and a never-ending Love hidden under the unlikely guise of sacrifice.  When we do that, we begin to experience, to know, the truth is – to paraphrase good ol’ Charlie Brown, that true, authentic, eternal “Happiness is” when we are Jesus’ faithful disciple.