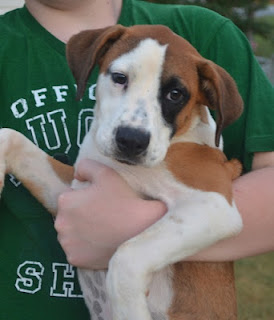 Hi everyone!  This is my homily for the 24th SUNDAY IN ORDINARY TIME – September 16, 2012 – the readings can be found here: http://usccb.org/bible/readings/091612.cfm.   Thanks as always for reading, and your comments (even the lady who last week said “you’re a jerk” on my facebook page regarding my homily… would’ve liked that she expanded on why I was a jerk, but alas, I appreciated that she took the time to react – haha)    God Bless- Fr. Jim

HOMILY
“I’m getting a dog.”

You know how many times those 4 words have been in my head getting serious consideration? How often people have encouraged me to just do it? I’ve tossed the idea around somewhat seriously for the last 6 years since theoretically I could have a dog since I’m not living in a rectory where I’d have to worry about him bothering the other priests or parish staff – but in an apartment at the Newman Center – with college students constantly encouraging me to do it… promising me they’ll help take care of him… highlighting all the positive qualities a dog would bring to the Newman Center.

I’ve even gone so far as to look at the pet-adoption website pet-finders – just to look… and find myself weakening each time I do it. Last week I went through this quarterly self-torture process and found one- “Petey” a boxer/hound mix who’s description went:  Petey is the sweetest boy in the world; he is a total love bug who gets along with everyone he meets.  This gorgeous angel is truly a rare find and will be an awesome addition to any family lucky enough to adopt him. Petey is four months old and currently weighs 29 lbs. We estimate him to weigh about 70 lbs when fully grown.  Petey was rescued literally hours before he was slatted to be killed in an animal control facility in Ga. I’m so glad that one of our one volunteers was there to save him because he truly is one of those rare finds.

Not only was he incredibly cute – but he was almost killed! How could I not get Petey! I’m getting that dog.

As much as there’s a part of me that really wants to do it – to meet and adopt Petey, something stops me from really saying “I’m getting a dog.”  The idea sounds great.  But if I say I’m getting a dog (and do so) I know that it will dramatically change my life. I learned that just from dog-sitting my furry nephew named “Buff” for probably close to 6 months over the last ten years.   I know that dogs require a great deal of love and attention; there’s a lot of responsibilities attached to ownership. Petey is going to need me to take him out several times a day (possibly early in the morning) and want to go for walks. He’s going to rely on me to feed him. If I’m out late with students at an event or a program, will there come a time where I’d say “I gotta go, it’s been a few hours and Petey needs to go out.”  Getting a dog is a BIG deal – so If I say those 4 words, that “I’m getting a dog,” then I have to realize that I’m going to be making a serious commitment that will change my life dramatically.

Some have said to me I’m “overthinking this” but honestly I don’t think so – I think too many of us “underthink” when we say some things – or do some things.    Because as much as this idea of getting a dog is a fun one, and I’ve been encouraged by a lot of people to do it, there’s a part of me that’s not ready to say those 4 words because I don’t know if I am prepared to have my life changed – to making that commitment.

I wonder if St Peter realized how big a deal his four words were going to be. How prepared was he to say what he said. Think about it, he had spent years with Jesus… and over that time, something clicked.  There was a recognition deep within as he moved from meeting Jesus, to hearing Jesus preach, to witnessing Jesus’ miraculous activity and then to ultimately knowing who Jesus was. This one day wasn’t the first time Peter – or the other disciples for that matter – had thought about who Jesus was.  That had to have been a question that was front and center the first time they met him up until this very day, this very encounter. So when Jesus changes the question from, “Who do people say that I am?” to “Who do you say that I am,” he is moving beyond some theoretical, philosophical discussion.  He is acknowledging that there are a variety of perceptions people had (perceptions people still have, today), all of which associated him with some of the greatest men of Jewish history – John the Baptist, Elijah, a great teacher, a good prophet – but now he turns though to these, his closest friends, his loyalest followers, his disciples and says – you’ve left everything behind, you’ve left your lives, your livelihoods, after all this time, after all you’ve seen and heard – who do you say that I am?

For Peter, this is a moment of decision. Does he dare utter something that has been unsaid, unspoken, that would be considered heretical to many?  Does he give voice to the hopes and dreams of humanity that there is a God who loves us so intimately, so definitively, that he has becomes one of us?  Does he realize the commitment, the dramatic change of life he would experience in uttering those four words – YOU ARE THE CHRIST?

Almost immediately, the weight of saying that and meaning that are clearly seen. Peter is forever changed in that utterance. He has stood out from all other disciples, all other apostles.  This declaration, this realization brings greater responsibility, which becomes clear almost instantly. His declarative words recognizing Jesus as not just a great man, but as the Christ – carry an enormity with them.  Jesus is the son of God.  And when you recognize that, and say that, it changes everything.

Because just saying that is more than just a factual utterance, a declarative sentence. It’s not like someone looking at me and saying, “You’re a white man.”  This is saying something with the eyes of faith. This realization means that Peter has to live differently now. Which is why the “smack down” he experiences just a few moments later is so swift and necessary.  On the surface we look at it and see Peter pleading as a good friend, hearing about an awful thing about to occur ;“No, it’s going to be alright, I’ll be there….we’ll be there… we won’t let something like that happen to you.” But Jesus, being the Christ, means He is God. And if Jesus is the Christ, then he doesn’t need someone – well intentioned or otherwise – distracting him from his true purpose. To save Humanity from sin and death. To take on the suffering of the entire world in order to redeem the whole world. He doesn’t need a friend reiterating the devil’s own temptation.

Peter has seen that Jesus isn’t just a a great man saying and doing some really great things. He’s not just some lowly prophet. Rather, He is to the only man who ultimately matters in the history of all humanity. And so Peter’s recognition of who Jesus is, his declaration of Jesus being the Christ, demands that he (and we) follow Jesus even more whole-heartedly, recognizing there is no one else worthy of his attention, his dedication . . . so that, ultimately, Peter will be able to lead others to the Christ as well.