Hi everyone, here’s my homily for SEPTEMBER 9, 2012 – 23rd SUNDAY IN ORDINARY TIME – Which is also the opening of the Academic Year at Montclair State University, the campus I serve at.  The readings for today’s Mass can be found at:  http://usccb.org/bible/readings/090912.cfm
Fr. Jim Chern

One of the amazing things about visiting Rome this past March was how many bonafide masterpieces of art there were; not confined to some museum, behind velvet ropes and armed guards, but just where the artist had intended – as devotional, religious articles, located in Churches.  So, you could see something that Raphael had created in a little shrine. There was an original carved marble statue of Jesus Christ made by Michaelangelo that you could literally go up and touch (as I found out, they don’t want you to do that). And in another Church, there was some beautiful paintings by Carravaggio, again, so close you could have literally touched them. 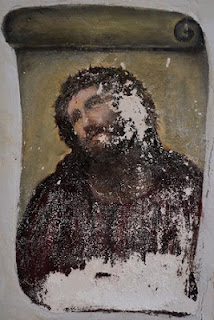 After what happened in Spain a few weeks ago, though, I wonder if all that will change. Maybe you heard about this? There was a one-of-a-kind fresco from the19th Century by the Spanish artist Elias Garcia Martinez titled “Ecce Homo” (which is Latin for “Behold the Man” – the words of Pontius Pilate after Jesus was scourged and had the crown of thorns placed on his head). The dramatic painting, after years of moisture on the walls of the Church, had flaked pretty badly and it was in desperate need of renovation. Here’s where different versions of the story come in.  Cecilia Gimenez, a parishioner of Santurario de Misericordia where the famous fresco was located says she had asked the priest if she could restore the painting and that he had given her permission to do so (other reports state she acted on her own).  Either way, the reality is Cecilia’s job was pretty bad. So much so that people have renamed the painting from Ecce Homo to Ecce 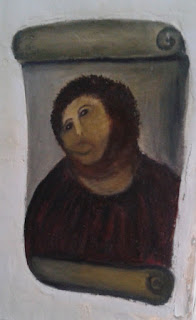 Despite how right she was that the fresco needed attention…
As well intentioned as she might have been in her attempts to fix it…
It’s pretty obvious that, perhaps, Cecilia’s not cut out for art-restorations. Or to be more direct and honest – she didn’t know what she was doing.  Sadly, in that fresco, the face of Christ may be irreversibly damaged.

That story from this summer came to mind in reading and praying with this Gospel. We hear of one of Jesus’ miracles – this deaf man with the speech impediment is brought to Jesus by a bunch of his friends. Jesus takes the man aside, puts his fingers in the man’s ears – touches his tongue and says EPHPHATHA!  BE OPEN! and immediately he can hear, he can speak clearly.

I kept thinking about that phrase – EPHAPHATHA – “BE OPENED” – those words seem tailored perfectly for the start of a new Academic Year. Whether you’re a new student, away from home, away from the familiar places and faces of high school for the first time … Or you’re a returning student – who’s had some experience of campus life – who knows how each year presents you with countless opportunities, countless people who will be inviting you to “Be Open”

Which makes sense. As hard as it may be for you to truly believe this – its one of those things that you only learn is true later in life – this is one of the most free times in your life.  In coming to college, being at a great University like Montclair State – you have an opportunity to try things you might never have the opportunity to do again. Take a class in something you’ve only remotely heard of and always been curious about. Try a sport at the Rec Center you’ve never played before. Meet people very different from the community you were raised in.  That’s the great thing about University life – that it brings together so many very different people, with very different gifts and talents and abilities and philosophies, brings them together in the hope that we can learn from each other.

But – at the same time there’s a danger to all of this as well. In all this “open-ness” sometimes you will find there are people who really don’t know what they’re doing.  There are some who will invite you to be “open” to trying new things, to experiment with new things – drugs, alcohol, sex – people who, if you look closely enough, aren’t really happy, aren’t really doing well at all, and, in fact, get so caught up not doing well that they repeat their bad choices to deaden the pain of those first bad choices – and invite you to ‘be open,’ thinking, somehow, that Misery loves company.

There are also some “adults” here who you might think, because they are older, that they automatically are more mature, or wiser; adults who tell you to be “open” to other philosophies or beliefs (but when you profess your Catholic-Christian faith, see how “open” they are to you).  There are some who will mock you because you come to Mass. There will be others who will sound intellectual or clever in their arguments as they belittle not just your Catholic faith but anyone who believes in God.    Yes, there are some people who don’t know what they’re doing, and, like Cecilia, don’t deserve to be trusted with a proverbial brush that could diminish the image of Christ, implanted in each one of us at our Baptisms… instead making you look like Ecce Monkey (and sometimes the rear of the Monkey if you get my drift)

It can be hard to navigate all this, which is why we’re here… Which is why we gather together as the Newman Catholic Campus Ministry – not just every Sunday night here for Mass… But every day to grow closer to Jesus Christ and His Catholic Church through prayer, through service, through just being together… Which is why we’re so happy you’re all here, and we want to invite you to be open to positive, new opportunities.  To take advantage of the freedom you have right in front of you – to check out a bible study, to help out when we work with the homeless and the poor, to just spend some time with the people who you’re sitting with at Mass but don’t really know yet…

We come together as an organization that has been on this campus for over 60 years, united to a Church that has been united for over 2,000 years, because of this one man who we continue to come to know and love, named Jesus Christ, who desires us to experience this Gospel, opening our ears to hear his voice, and our tongues to profess how Jesus truly “has done all things well.”