Hi everyone – here’s my homily for August 5, 2012, the 18th Sunday in Ordinary Time.  The readings for today can be found at http://usccb.org/bible/readings/080512.cfm.  As always, I appreciate all your feedback, your comments – and all who forward these words. I’ve been amazed at the response and that each week over 1,000 people are reading this blog.  Praise God!

If you’re interested, I’ve also been writing for FOCUS (The Fellowship of Catholic University Students) blog on a monthly basis.  This was my most recent post on the issue of the “definition” or rather “re-definition” of Marriage.  “Can you Marry Yourself?” – http://www.focus.org/blog/posts/can-you-marry-yourself.html

And finally, a word of thanks to all who are helping our Newman Center’s Summer Appeal.  We’re trying to raise $6,000 to erect two beautiful new statues – “Christ the Good Shepherd” and “The Blessed Virgin Mary and Child” outside to greet students coming and going to campus.  If you’d like to contribute, you can check out info here: www.MSUNEWMAN.com

(Now with all of those announcement it actually feels like a Sunday Mass, huh? 🙂 ) 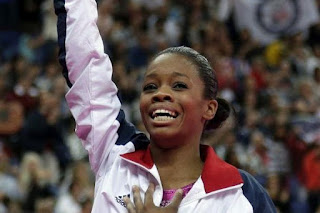 The other night a friend of mine was asking if I had been following the Olympics at all – and I guess I came across as slightly disinterested as I somewhat half-heartedly said “kind of.”  After he responded by questioning my patriotism, we started arguing and I said to him “honestly, outside of the Olympics, how often do you watch Gymnastics on TV? Or Swimming? Synchronize Diving?  I know how inspirational these athletes and their stories are and I’m not dissing them or the Olympics (or the United States either, thank you very much…) But I just haven’t had any real desire to watch them.”

What surprised me though was his explanation for why he was drawn to watching the Olympics. He explained that he’s  not really an avid fan of those sports and would probably never really watch swimming or gymnastics (and definitely not synchronized Diving) were it not for the games. And he wasn’t even wrapped up in seeing if America has more medals than China or Great Britain. And it wasn’t for any of the usual reasons a lot of people have said as to why they watch the games. He explained “you know everyone’s talking about this gymnast Gabby Douglas today (it was the day after she had done her amazing gymnastic feat and took the gold) – but the thing is – up until today, how many people really knew her?  How many people knew or even appreciate the day after day, month after month, year after year of hard work, sacrifice, perseverance, getting up early, the dieting… there were all kinds of things that were required for her to get the gold.”  Then he concluded, saying “So many people are excited because she won a medal, but I’m just blown away seeing people who are so passionate about something and pursue it like that. How many people are like that”

I thought that was a pretty thoughtful reflection – to be drawn to the Olympics to see passionate people being passionate. The more I’ve thought about it, he probably has a better reason to be drawn into watching the Olympics than I do for the Yankees (I can’t believe I just said that)

But the more I thought about that conversation and was praying with this Gospel, I started to see something similar.   Let’s look at what’s happening.  This Gospel is a continuation from last week’s Gospel where Jesus had fed the multitudes with the tremendous miracle of multiplying 5 loaves and 2 fish feeding way over 5,000 people. So today picks up right after that.  All of those people had experienced that miracle the day before, and when they wake up the next morning, they realize that Jesus has left the spot where they were. They start looking for him and realize that  He had gone to the other side of the lake (notice that St. John tells us the boats had remained where the people were) And so they ask him “When did you get here?” (I wonder if someone said “How’d you get here?  The boats are on the other side of the lake, what did you do, walk on water? Hahah?” – and then Jesus respond “Ah, well, actually…” since he did, we just didn’t read that portion of the Gospel account, but anyway…)

But look how Jesus answers them, He says “Amen Amen, I say to you, you are looking for me not because you saw signs but because you ate the loaves and were filled.”  In other words he’s pointing out that the reason they were coming to Him was because they were hungry again! It’s like dinner guests who didn’t leave! They had a great meal the night before, it’s breakfast, there’s still a whole lot of people who had hung around all night. So now that they were hungry again and are looking for breakfast! I wonder if someone was saying “we have one box of Cherrios and half a pint of milk – what can you do now Jesus?”

Seriously though, the point is, they have these temporal needs which at the moment are important to them. But they are being challenged to go deeper.  What is drawing people to Jesus? Is it simply about having their physical hungers met?  Because Jesus is inviting them to move beyond merely looking at that one miracle like some spectator cheering an athlete winning a gold medal and instead he invites them to become active participants. To become passionate people who are passionate about Jesus: who He is and what it is He has come to offer. To recognize the far deeper needs He wants to fulfill.    But to do that means they have to move beyond the temporal, temporary needs and acknowledge those deeper longings and hungers that need to be met that only Jesus can fulfill.

Will they become passionate about Him? Will they embrace the hard work, the sacrifice that is necessary to be a follower; will they persevere in their faith in pursuing the hope-filled gift of eternal life by living a genuine and sincerely loving life that He requires of His followers?

We find ourselves with those same questions- are we truly passionate about Jesus Christ? What is it that draws us here week after week?  No doubt many of us bring things that we’re dealing with – someone is unemployed, a loved one is ill, and all kinds of other major issues in our life can leave us fearful or afraid or angry. It’s good to bring those to Jesus and we should.  But Jesus invites us to go beyond looking at Him to provide a quick fix, to simply offer a miraculous answer to the questions that plague us.  He’s inviting us to go deeper and addresses us like we were the crowd of hungry breakfast seekers in the Gospel. He challenges us maybe you haven’t thought about it because of your physical hungers, because your stomach is empty – but what Spiritual hunger are you experiencing? How are your heart and soul feeling empty?  If you think what I did with a few loaves and fishes is impressive – wait to you see what I can do when you offer your whole self and become as passionate about me as I am for you.

If we are able to find within ourselves that pursuit of Him that drives us to constantly strive, seek, desire and race toward Him, while we won’t share the Olympic triumph of winning a Gold Medal, we will experience a greater prize an eternity of never hungering, never thirsting for anything, ever again.