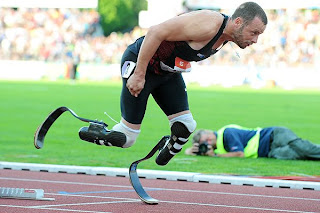 Hi everyone, here’s my homily for the 14th SUNDAY IN ORDINARY TIME – July 8, 2012.  The readings for today can be found at: http://usccb.org/bible/readings/070812.cfm  As always, thanks for reading and your comments and feedback.  God Bless –  Fr. Jim

We’re about 20 days away from the 2012 Summer Olympics.   Most people know that, whether they’re into the games or not.  It’s hard not to with Television commercials running non stop, the Olympic symbol appearing all over the place, the music (DUM, DAHHH DAH DUM DAH DUM DUM).  Stories and articles with names and faces we know, but maybe haven’t heard about in 4 years re-emerging (like Michael Phelps for example)

Whether you’re an avid sports fan or not, one of the things that catches people’s attention about the Olympics is hearing and seeing so many inspirational stories.  One that stood out – way before the opening ceremonies this past week that simply had to deal with a man who qualified to compete in this year’s games.

His name is Oscar Pistorius.  His sport is running.  He’s an Iraqi war veteran.  What makes his story so unique, so inspirational is that this Olympic Athlete is a double amputee who lost both of his legs 25 years ago when he was 11 years old.  He was born with a condition that left him without both fibulas (the bone that runs from the knee to the ankle).  The doctors outfitted him with these prosthetic legs.  And for 25 years he’s thrived with these prosthetics.  Oscar wasn’t deemed eligible out of pity or out of a desire for a feel good story leading into the Olympics.  He’s a serious contender, considered to have a real shot at the Gold Medal in the 400 and 1600 meter races.

Just seeing pictures of the guy, standing on the race track with these limbs made out of carbon-fiber was amazing.   Because we’re not used to seeing, hearing people thriving despite these obstacles.   To see someone being “made  strong” in their weakness.  In our world, weaknesses are to be eliminated, ignored.    You have to wonder how many parents learning that there child would be born with this condition would’ve been counseled to abort him (that’s not meant to be overly dramatic – it’s a legitimate question  considering the number of parents I’ve met who were given less serious predictions about their children – which often times never came to pass by the way – and were counseled to do so)   Or How many people suffering from a “disability” such as this would’ve simply accepted that their lives were now limited, diminished from what others were able to do?

Yet Oscar runs.  He didn’t accept the limitation of not having fully developed, functioning limbs.  He had to think outside the box.  He had to allow his world to be stretched in ways that probably few could ever have imagined.  He had to find Faith, and to believe there was something more than these limits were telling him about Himself and his life.  And so Oscar runs.

How sad to see the complete opposite in today’s Gospel reading.  Here Jesus was returning to his home town.  He’s speaking in ways that were catching people’s attention.  They’re witnessing amazing miracles taking place.  They’re hearing a teaching that’s new to them.  And what happens?  They immediately start to dismiss it.  They limit  God – limiting Jesus Christ.  And perhaps not even realizing how in the process they were limiting themselves as well.

Because they argue – this guy Jesus – we know him.  He’s Joseph and Mary’s kid – the carepnter.  His family is here (by the way, the brothers and sisters that are mentioned here by St. Mark, were not his blood siblings.  There wasn’t a word to identify that these were what we would consider cousins of Jesus)   They simply see Jesus as a fellow citizen of Nazareth.  So when we think about it, when they reject him, they are also saying – that God could not do something amazing in their own town, in their own corner of the world – or even in their own lives.

How many of us feel the same way about ourselves?  Tell ourselves similar lies about ourselves?  Thinking the ideas of being a holy person, a saint; someone that God could use to change the world – that’s not possible for people like ourselves.  We’re too this or that  – as we rattle off our lists of inadequacies, our failures, our sins.

Which is why the second reading is so perfect to hear today with the Gospel.  In St. Paul’s letter to the Corinthians, we hear some of the most comforting and encouraging words that the Lord spoke to St Paul and that he speaks to us.  Yes we are weak.  Yes we are sinful.  Yes we have things that inhibit and limit and hold us back from being the sons and daughters the Lord calls us to be.

But when we start to believe that the Lord has called us to greatness.

That he desires us to be fulfilled people.

That we don’t have to remain in the limited spaces or places we find ourselves in or confine ourselves to and trust the Lord, then we too hear the words of the Lord are spoken anew to us -My grace is sufficient for you… power is made perfect in weakness.

God is constantly trying to break through the formidable shells we build around our hearts that keep him at a distance.  That limit us from seeing the power, the potential of what can be in our own corners of the world, in our own lives if we truly were to let Jesus in and to be who He says He is.

Oscar Pistorius as he prepares for his Olympic competition is already a member of an extremely elite group of people – surpassing what great majorities of so called able bodied individuals will never have the opportunity to do.  But rather than challenging ourselves to go out for a 20 mile run today, perhaps we can use his example to look interiorly at our own faith lives.   Will we be like the citizens of Nazareth who missed the opportunities to have their town, their world, their lives transformed by Jesus Christ or will we do what the Saints have done for thousands of years.  Knowing that the Lord, despite our imagined or legitimate deficiencies  is calling us to do amazing things, and that if we let Him, He will supply the legs or whatever else it is we need to run the race and win that eternal prize.