Latest News
Home /Blog/WHAT ARE YOU FEEDING ON? 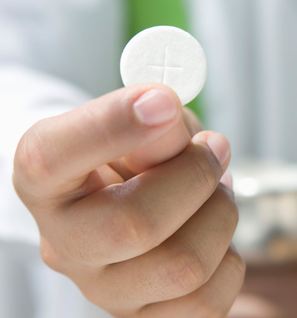 Here is my homily for the Feast of the Body and Blood of Jesus Christ (Corpus Christi) –  The readings can be found at  http://usccb.org/bible/readings/061012.cfm  Thanks for reading and your feedback! God Bless

It’s hard to know when the shift happened when reality TV went from a documentary type of thing (like COPS) where you get a window into another person’s life to the twisted genre that it has become.  But one example that really signaled a major warning alert was from a few years ago.  And were it not for the students I work with at Montclair State University, I would have never even heard of it.  It was called “Jon and Kate plus 8″ – a show that followed a Pennsylvania couple as they go about raising twins and sextuplets.

It was a pretty popular show – despite my blissful ignorance of it. There was over 100 episodes before it became even more popular as well as becoming front-page news. Jon and Kate supposedly, allegedly, possibly had been unfaithful to each other. So the normal fan base or regular television audience of about 5 million doubled with this year’s season premiere. One columnist observed (in the Star Ledger – Leonard Pitts, 6/11/09  “So Many Lives Falling Apart. Now that’s entertainment!”):

“The premise was that viewers would follow the Pennsylvania couple’s adventures in parenting… but apparently, 100 episodes later, viewer interest has been shifted by the fact – and I only know what I read – Kate is a nagging harpy and they’ve both maybe been unfaithful. Now people are parsing episodes as they once parsed diplomatic communiques from Cold War summits, looking for clues to the state of their union in body language and offhand remarks. Two lives are falling apart for your amusement.”
This columnist pointed out numerous other examples of what falls under the category of “Pop culture” – what if you have a question about paternity? Tune into Maury! Gambling Addiction, well, Dr. Phil is up at 4:00. If you’re toddler goes missing, the second call is to the publicist. He concludes by saying, “We watch this family’s tragedy as if it were baseball … but there is something deeply…debasing…. that touches both the watchers and the watched. It ‘changes’ us.”

That line struck me: How we’ve grown accustomed to watching “lives falling apart for our amusement.”   It seems we’ve crossed a truly sad line, doesn’t it? It was one thing to watch a soap opera or a drama on television. Even Law and Order had shows that were “ripped from the headlines.” But here we are tuning in each week as we pry into people’s brokenness. And the observation that this changes us is a troubling, yet true reflection. Some fans of Jon and Kate seemed more upset that characters in a drama they enjoyed have acted “out of character.” Some seemed more concerned about the future of the show than the future of this family. Sure, they are complete strangers to most of us, but the tremendous lack of concern or empathy that we justify with, “Well, they put themselves on the air, in the public spotlight,” seems to give voice to a tremendous lack of love.

What is it that we are feeding on? What is this consumption doing to us?
After filling up on this type (and countless other examples) of “junk food”, we come together on a special feast – the feast of the Body and Blood of Jesus Christ. A celebration the Church has where we are invited to focus on what our God does for us. That God has kept his promise – that he would never leave us. And not as some observer out in a distant heaven. Jesus gives us His Body and His Blood – He tells us to “take it” – to feast on Him. To consume Him. And if we do this, worthily, He will consume us. Jesus will become intimately united with us as we share Him.

Is He really present in that consecrated bread and wine? Catholics are asked that all the time in polls and surveys, by friends who aren’t Catholic. And rather than be afraid of that – perhaps that’s a question we need to really reflect on for ourselves. If we don’t believe or have trouble believing or are struggling to believe – then why is that?

It’s not that the priest is celebrating Mass wrong. It’s not that the Church has messed up. For 2,000 years – the Church has gathered professing the same belief that Jesus gave those disciples in that upper room that night of the Last Supper. So if as I’m coming forward to receive Jesus, what is my doubt saying to me? What is that question that’s lingering in my head? What makes this that I receive seem unreal to me, as opposed to the things I receive and perceive more easily as “real”?

Can God make this bread and wine Jesus’ Body and Blood through His Holy Spirit moving through the Church, through the priest? Can we move beyond our selfish ways? Can we bring healing to people’s hurts? Can we bring justice and hope to those who are victimized and abused? Can we bring life to a culture of death? The Church has professed and witnessed an emphatic Yes to those questions. Yet, at the same time, each of us has to live that Yes we profess in our own hearts, our own souls, our own lives.

In short – this consumption has the ability to change us, too. Not for our amusement, but to bring God’s very life and love to a broken world.