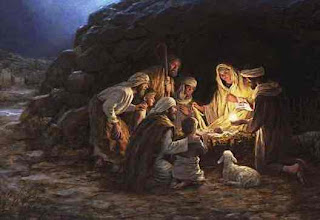 Hi everyone – MERRY CHRISTMAS!!  Here’s my homily for the celebration of THE NATIVITY OF THE LORD – CHRISTMAS DAY.  The readings for this homily are for the Mass for the Day.  The readings can be found at: http://usccb.org/bible/readings/122511-mass-during-the-day.cfm .  I’m grateful to all of you for taking the time to stop by, to read and share some comments.  God Bless you all – and MERRY CHRISTMAS!
Fr. Jim

It probably would be a safe bet to say that everyone here has at least heard of a man by the name of Albert Einstein.  If you’re like me, you might not really know why he’s considered an intellectual heavyweight – you just accept that his face could be an illustration of “one who is brilliant,” or that his name seems to be synonymous with genius.  If you studied physics in High School (I barely got through Chemistry and Biology, so I didn’t) you probably learned a great deal about Einstein and why he is somewhat revered for his knowledge.   Particularly his major contribution to the field of Physics – his discovery of “the speed of light.”

I remember in college one day trying to understand what this meant and asking friends of mine who were science majors about it in one of our highly enlightened conversations.  My one friend started by saying that there’s nothing faster than the speed of light.  I questioned that saying “I thought Superman was?” to which my one friend said “no Superman is faster than a speeding bullet… it’s ‘the flash’ who’s faster than the speed of light.”  “Who’s the Flash?” I wondered.  At which point my science major friend told us to shut up as he pointed out this was why I couldn’t study physics (or a bunch of other things for that matter:) and then went back to trying to explain this theory of the speed of light.

My buddy explained that if the Sun was a giant light bulb, that got flipped on, that it would take something like 8 minutes for the “light” ray to hit earth.  So the speed of light moves 91 million miles in 8 minutes.   The reason this is important, the theory goes, is that everything in the universe affects other things.  And by knowing the “speed of light”, Einstein was able to discover this one “constant” in the universe.   That nothing could go faster than the speed of light.  So in discovering that, Einstein had come upon an essential thing to beginning to understanding everything.

Which is why I was kind of puzzled a few weeks ago. There was a headline on (I think) Yahoo – a small headline – very unimpressively listed with dozens of other headlines, that you could easily miss it, that said that scientists have now discovered things, these particles, that are faster than the speed of light.  Like I said, I’m not a scientist by a long stretch, but I thought when I saw that – isn’t that kind of a big deal – to the Physics people?

And, when I read it, yeah, it really is.  In fact there’s some that are dismissing it outright trying to protect Einstein.  There’s also some healthy skepticism and arguments by various scientific teams who are continuing to study this latest “discovery.”  Because quite simply, if they have found something faster than the speed of light – then, as one scientist put it:  “Einstein was wrong… [and] our traditional concept of the universe would be ripped apart.”

The whole thing is fascinating to me – which is strange to me not really being interested in science.  And it’s not a matter of wanting to tear down a hero in the science community.  Because even if they do discover there’s something faster than the speed of light, it’s obvious Einstein’s work was the first step in them being able to do that.     What’s fascinating though is that something that was seen as the standard by which the universe was measured… that one constant was the speed of light.  And now that constant might be gone.  That standard might not be in effect.  And all that people thought they knew about the mysterious aspects of the vastness of this universe have to be reconsidered.

We celebrate a similar thing that happened over 2,000 years ago.  Christmas proclaims how the whole universe would have to be reconsidered – not by the Speed of Light, but by THE LIGHT Himself.    It’s easy for this essential truth of Christmas to be missed.  Our focus on Christmas  – very beautifully and appropriately – centers around children.  As we see the innocence, the anticipation, the excitement, the joy  of kids – they give life to our images of the baby in a manger, blissfully unaware of his meager, humble beginnings.  The brilliance in God’s plan is that a baby is unthreatening.  The Christ-child, like our kids, simply desire our attention, our affection, our love.  God’s entrance into our history does so wishing for our eyes to gaze on him and love him.

But there’s more to Christmas than meeting Jesus in the manger.  Our human nature is prone to ask questions that need grown up answers.  We don’t simply wish to unlock the secrets of the universe in an inquisitive way.  No, we wonder what has happened to those promises of the “God-with-us” Emmanuel born in the manger.  We sing of that “silent night holy night” with “the Son of God, loves pure light” and wonder with the darkness in our lives or the darkness of those near and dear to us, the darkness throughout the world – wonder, was that Silent Night, Holy Night, for  just one night only? The darkness gives us pause, makes us wonder if we need to reconsider “the Light’s” affect on the universe.

Which is why the Church gives us this beautiful and rich word of God from St. John reminding us that with the birth of Christ, the history of humanity, the very course of the universe has changed:

St. John’s Gospel talks about Jesus as being “The Word” – the essential, the unifying thing that unites all the cosmos; He refers to Jesus as “The Light” – an element that without which life would not be possible.  For us, Christmas reminds us of these unchanging, eternal realities.  God enters as a baby to make himself accessible to humanity.  But He remains fully God.  And while things like war, poverty, abuse, illness, death continue to ravage the lives of the world around us, His promise that He has come and dwelt among us, and remained with us which is what draws us together for this feast.    We might not be able to fully understand this mysterious presence defined by St John as “light.”  But the true gift that is Christmas is that God allows us to come to know Him and love Him and welcome Him in the person of Jesus Christ.  To have a personal relationship with this miracle ourselves.