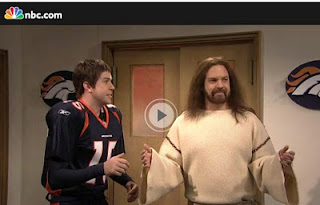 So a quick PS on Tim Tebow and my homily for last week (which is right underneath this posting).  First off thanks to everyone who read it, forwarded it, recommended it -etc.  There’s a “stat-counter” on the blog and I was surprised at the numbers of people who were on the site to read it.  And thanks to all who sent a note or message… it’s awesome to hear how God works through all of us and how He touches your hearts.

So last night I watched Saturday Night Live.  I usually will tune in, always with the hope that perhaps it will be funny as it was.  For some reason SNL goes through these cycles of funny/unfunny.  When they’re good, they’re really good.  When they’re not… well, they get desperate.  Which they did last night.  Not to mention wildly offensive.

After a funny show – thanks in part to tons of funny former cast members returning as Jimmy Fallon (a former cast member himself) came back for the “Christmas Episode” – with a few moments to spare till the end, they went with a cheap, unfunny, pathetic and insulting “sketch.”  Having “Jesus” visit the Denver Broncos locker room post-game – Christ was portrayed telling Tebow to “tone it down”; took credit for all the victories (which is something none of us, including Tebow himself would ever claim) and then told Denver star kicker Matt Prater “Prater I pray to you.”

I’m not a prude or puritanical by any stretch of the imagination.   Which you could probably figure out by the fact that I watched the entire episode and found most of it funny.  But the lack of any reverence anymore is just surprising to me.  Maybe I’m still naivete in being surprised.  But seriously, making a faithful, religious, devout man – who happens to play football (and is doing better than any of the Sportswriters had predicted) a target to ridicule by Jesus?

I took comfort that most in the audience seemed to be silent.  Perhaps because it was unfunny as well as offensive.  Only hope the writers took notice.  If not for their jobs, than for their own reflection, to ask themselves – do they really think it’s okay to mock God?

– Phew… I feel better just posting that…  Homily for the 4th Sunday of Advent to come later tonight.  God Bless!