Latest News
Home /Blog/BETWEEN EVICTION OF 103 YR OLD & BLACK FRIDAY – Can we prepare a way for the Lord? 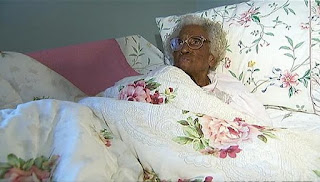 Hi everyone, here is my homily for the SECOND SUNDAY OF ADVENT – DECEMBER 4, 2011.  The readings for today can be found at http://usccb.org/bible/readings/120411.cfm .  As always thanks for your feedback and comments.  God Bless, Fr. Jim

The past couple of weeks has been a bit of a downer for me when looking at television news, seeing news stories online or reading a newspaper (yeah I actually still get those ancient things called newspapers) To see that each year, how the hype of Black Friday, Cyber Monday – shop on Thanksgiving night gets worse…  That no one seems to care about the store workers who have to work, or the public servants cops, firefighters, EMT’s who are even more necessary to deal with greater insanity…  That each year we see more commercialization and absolutely atrocious behavior … hearing all of this “news” described as “Christmas preparations”; leaves me somewhat disheartened.

Which is why when I was scanning the news and saw a picture of this 103 year old woman in her bed and quickly saw a headline that said something about “evicting” her, I really was about to look for the Maalox or Rolaids.  Vinia Hall, who’s three weeks away from her 104th Birthday has been living in this home in Northwest Atlanta (with her 83 year old daughter) for over 53 years.   The family has been in some dispute with Deutsche Bank, to the point that on Tuesday, the Bank had planned on evicting Vinia and her daughter from their home.

But here’s where the story took an unexpected turn.  When the sheriff’s deputies and the moving company hired by the bank arrived at the house of this elderly woman who said of her modest home “I love it… It’s a mansion” – the deputies and movers got back in their cars and left, saying they would not be part of kicking these two older women out.  Vinia seemed steadfast through the whole ordeal saying  “No, I knew that they know what they were doing. God don’t let them do wrong.”  She added one request, “Please don’t come in and disturb me no more. When I’m gone you all can come back and do whatever you want to.”

It remains to be seen if the sheriffs deputies will be charged for insubordination, the movers fired and whether initial promises made by bankers and politicians to allow Vinia and her daughter to remain in their home or not will be fulfilled.  But it’s hard not to see in the mix of the daily news feed, how Vinia’s story seemed to be like a prophet’s voice calling out to us who contribute to this “desert” of an environment that we call the “Christmas season”… and that voice cry’s out, as Isaiah did in the first reading, as John the Baptist does in the Gospel – to prepare the way of the Lord… to Make straight his paths.

Because hearing a story like this, we can go to the usual commentators on the left and right who will all argue about financial stuff – point lots of fingers at one another: politicians, bankers, lenders… And we can go off angry that the other side is wrong and my side is right, as we storm off and line up at midnight for 70% off a HDTV or whatever it is – all the while we continue to ignorie the poor, the needy, the helpless, the sick, the sorrowing, the imprisoned.

Meanwhile, the scriptures remind us, very simply, that “GOD COMES.”  That is the hope filled sentiment of Advent – not “God has come” not “God will come” – GOD COMES – here and now.  In this time and space, through the hearts, the souls of His faithful people.   Often times God comes to us in the ordinary, routine, everyday experiences and encounters of daily life.  For Vinia, no doubt, as her family and the bank has fought and argued for years over this mess, there were opportunities God was inviting people to come to a reasonable resolution that were ignored.   There were moments where God was trying to break through to people to come to their  sanity that were not taken… Which led to the moment where this poor old woman about to be steamrolled out of her apartment.

Her last refuge was God.  Who she put her complete faith and trust in.   That God would come to her, and “save her.” But how sad is it that it had to have been in this dramatic, public way – through the non-actions of those ordered to fulfill their “duties” (which to me seem heroic considering the consequences they could be facing).  That’s not how things are supposed to be.  That’s probably not how Vinia expected her prayers to be answered, with her face, that sweet smile splattered on the nightly news.

But she knew that “God comes” – and that if He has to, as He did to Vinia in her moment of trial, He will reveal Himself in quite unpredictable ways.   For you and I, who are blessed to be here – we know the fullness of these prophetic calls – that the hopeful dreams of the prophet Isaiah were realized beyond his imaginations in Christ.  That John the Baptist’s knowledge of the Jesus being the “Lamb of God” was only a glimpse to the fullness of who Christ is, probably greater than he could have expected.   We know that God has come to us, and remains with us… That’s why we’re here.  We know that Jesus has come and stayed with us.

But as injustices continue, as the poor and hungry await relief, as the persecuted and suffering long for deliverance, in many ways God’s coming remains simply a promise, or a distant hope.  And often times if we look at those situations objectively,  there’s no reason it should be that way.  His salvation, His redemption remains distant because what we’ve experienced and known to be true of Jesus Christ hasn’t become enrooted in our hearts and transformed our lives to make us the prophets and messengers to proclaim God’s word; we haven’t become the presence of Christ to bring His healing to those desperate for it.

He who has come, died and rose from the dead – is expecting us who wish to celebrate His birth at Christmas in a few weeks to “prepare His way,” to be His prophet: To proclaim with whatever talents and skills we possess His presence in the wastelands and barren places around us.   To create a highway for His compassion and justice to enter and re-create our world so that the Vinia’s around us who are looking for signs that “God comes” isn’t just a promise, but a reality.