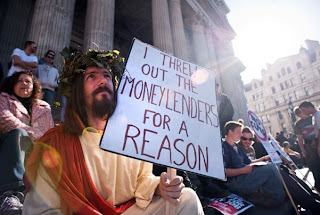 Here is my homily for the feast of JESUS CHRIST, KING OF THE UNIVERSE – NOVEMBER 20, 2011.  The readings can be found at http://usccb.org/bible/readings/112011.cfm – As always, thanks for reading and all your feedback.  God Bless (And Happy Thanksgiving!)
Fr. Jim

Since late September, there’s been wide-spread protests around the country – around the globe that has been dubbed by some as “the occupy movement.”  Here in the New York Metro-area, the local version of it has been called Occupy Wall Street, which has made famous a small park that not only tourists to the Big Apple had never heard of before, but probably many New Yorkers were unaware of as well – Zuccotti Park.   As with any protest movement, there’s been various claims and charges that depending upon your perspective either inspires you or enrages you.  There have been things said and done by some individuals associated with the movement that make it hard for anyone to want to be even remotely connected with them (like anti-Semitic sentiments) – to other things that would be hard for anyone to deny or argue against (high unemployment, corruption, the influence corporations have on all aspects of economic, political and cultural life)  It’s confused a lot of people because there’s no clear leader, nor has there been any list of specific demands.

But if you’re able to get to the core of the movement, a common theme or a top reason so many are out there protesting, the reason you would hear given the most is that they are there to fight against “greed.”  The protestors argue that greed is the reason there’s so much unemployment, foreclosures, so many problems that affect a great majority of the people (they would claim 99% of the population) because of the excesses done by a few.

Whether you agree with all of their beliefs, their tactics, or their solutions or not; if we’re honest with ourselves, we have to recognize that greed does lead to destruction.  We can argue about the particulars and all, but even in our personal lives we know that to be true.  When I’m greedy – when my focus goes to what I alone want, immediately I’ve stopped considering what anybody else needs because my focus is on the pursuit of what I want.  When we imagine that on a greater level – corporations, governments, institutions – acting that way, we can see how this could affect even greater numbers of people.  So greed is an evil that impacts us not just here and now but poses a danger to our eternal souls…which is what we just heard in today’s Gospel.

In fact today’s Gospel has been cited by some affiliated with the protests as evidence that Jesus would have been among the people in the crowds that are occupying Wall street.  The Washington Post in a recent article on the subject interviewed some religious scholars that seems to support this view:

“Jesus believed the whole system was corrupt,” says Bart Ehrman, a professor of religious studies at the University of North Carolina. “The people who ran things were empowered by the evil forces of the world, and his followers had to work against these powers by feeding the hungry, housing the homeless and caring for the sick.”

Interestingly with this story there was a picture of a guy dressed as Christ at one of the protests with a sign saying “I threw out the Moneylenders for a reason.” (I would say ‘yes Jesus did… care to know what it was? Because something tells me it’s not the same reason as yours…’) But before people use (or mis-use) Jesus, making him a Che’ Guevera to the occupy movement or some face of “revolution” it’s important for us to know there’s a fundamental difference.

Yes Jesus is preaching against greed in all it’s forms.  Yes, today’s gospel is a warning that the fate of our eternal souls is dependent upon how we cared for our brothers and sisters in great need.   Did we even see them in need?  Did we even recognize them as brothers and sisters?      But that only works when we recognize that we have a common Father.  That only works when recognize Jesus Christ as King of the Universe who is the one giving us these commands.  And that living under his dominion, living under his reign, that there will come a day when we will be asked What did you do for me in your neighbor?

That’s why, even though it can be easy to see common ground between Jesus and the protesters being “against Greed” – many of the parallels would end there.  Jesus isn’t going to favor capitalism over socialism or communism or any other economic system.  Jesus isn’t going to register as a Republican or a Democrat (that’s going to tick off both sides of my family) Jesus isn’t going to favor violence as a means to bring about his kingdom (or combat the things that threaten his kingdom) And while Jesus loves those in Zuccotti Park for their passion and their desire to address injustices done to the poor, the weak, the vulnerable – he also loves those in the board rooms, the traders, the financial people.  He loves the politicians, the media folks.  He loves the Catholic, the Jew, the Muslim.  He desires the salvation of everyone of the souls who live in his vast kingdom and continues to reach out to all of us that we will desire that as well.

He wouldn’t differentiate groups of people between haves and have nots.  Or percentages like 99 % vs 1 %.    What we celebrate in today’s feast is that Jesus Christ is the eternal King of the Universe.  His kingship came not simply by being God’s son – which should have and could have been enough.  It was won by His death on the Cross and His Resurrection from the dead.  No other has cared so much for each one of us that they would lay down their lives for us.  It’s an often quoted statement, but it bares repeating: If you or I were the only person to ever have lived, Jesus would still have come down to earth, suffered and died on the Cross for us, for our sins, for our corrupted, sinful hearts.  That loving act has to matter to us.  It has to call us out of self-centeredness into selflessness.  It has to transform us to recognizing that my sins – whether it’s greed, or any other sin – doesn’t simply upset God because we’ve chosen not to listen to Him and follow him, but because it also affects others.  It affects the Kingdom of God in that some of our brothers and sisters are not living the fullness of life they’ve been promised by the Lord, because others of us haven’t been obedient to our King’s commands.

In the past few weeks, sadly the occupy movements have seen crime, disease and violence filter in.  And all of those things seem to have distracted or moved the discussion away from the important questions that were being asked, like: what responsibilities do I have to my fellow citizens?  What responsibilities do companies, businesses, government have to there workers, customers, citizens?  That loss of focus was going to eventually happen because Jesus Christ wasn’t their motivation, but was being used as an afterthought to build a larger alliance.  That doesn’t diminish the issues they’ve raised.  And it doesn’t mean that He doesn’t want us to do something about those issues – it’s clear that He does.  The caution we have to make is in assuming he would align himself with “Occupy wall Street” or “Occupy DC” or whatever city the protests have popped up.  That’s way too narrow for this King of the Universe, who comes to occupy our hearts.