Latest News
Home /Blog/“GET THE HELL OFF THE BEACH” 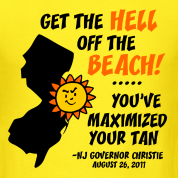 Hi everyone!  Here is my homily for September 4, 2011 – 23rd SUNDAY IN ORDINARY TIME.  The readings can be found at http://www.usccb.org/bible/readings/090411.cfm – As always thanks for reading and posting your comments and feedback – God Bless & Pray for all of us here at Montclair State as we begin a new Academic Year!  Fr. Jim

A week ago, we were preparing for the worst.  It appeared that Hurricane Irene was gearing up the coast for a direct hit on New York City as a Category 1 or 2 storm.  Some predictions said we should expect 18 hours of driving rain with sustained winds of over 85 miles per hour.  The nightmare scenarios that meteorologists painted caused a lot of fear and concern.  It also brought about widespread evacuations, from the Jersey Shore to parts of New York City, which for many residents was a first.

For a variety of reasons, some who were told to evacuate were hesitant, resistant, even defiant to heed the warnings.  And for those in authority, given the responsibility to care for their fellow citizens, they tried a variety of approaches to get people to listen.  Along the shoreline, an official said something along the lines of “if you ignore these warnings, know that once the tropical force winds and rains hit, we will not come to your aid if there’s an emergency.”  In Cape May County NJ they tried a different approach, saying “if you choose not to heed the evacuation order, we ask that you do one thing.  Get an index card, write your name and social security number on it, put it in your left shoe before you put your shoes on so that we can identify your body.”  Mayor Bloomberg in New York City tried reasoning and laying out the penalties and fines you could receive if you ignored the warning.  While Governor Chris Christie was less subtle, and characteristically blunt as reporters showed him pictures of people soaking up some sun and surfers enjoying the rough tide yelling “GET THE HELL OFF THE BEACH.” (In some parts of the country that would’ve been considered profane, by Jersey standards, that’s considered tame)

Fortunately, all of these messages eventually seemed to sink in.  For the most part people evacuated.  Temporary emergency shelters opened at University campuses throughout the area, people went to stay with friends and relatives in areas away from the storm, neighbors checked on one another.  Considering the dire predictions of what could have happened, for the most part, the worst fears of death and injury didn’t happen.  All because people heeded the warnings.

The readings today pretty pointedly tell us that each one of us are responsible for one another, not just when a category 2 hurricane is coming at us, but for something far more important, our souls and our eternal lives. In both the first reading and the gospel, there is clearly an order that we are to give warnings to one another when we see one another is going “the wrong way” (away from God), when our brother (or sister) sins.

Most of us feel uncomfortable when we hear that.  We have been conditioned to “mind our own business.”  Look at what happens when the Church tries to speak these ancient, eternal truths whether it be about the destruction of human life in abortion or the destruction of human families with attacks on marriage.  The Church is accused of trying to “impose” it’s will,  mocked for being out of date or out of touch; and it’s own failures and sins are recounted as reasons that people shouldn’t listen to the Church (kind of interesting that some of the same people who can recognize there are absolute rights and wrongs about things when it comes to the Church, fail to see that anywhere else in society).

Just hearing those general examples, more than likely thoughts start to stir — uncomfortable ones because we can fill in those general illustrations with names, faces and real-life examples.  And we don’t like that.  Fear of our own sinfulness and our own failures mixed with a mis-reading of Jesus’ command to “not judge one another” paralyzes us into inaction.  We try to put it in a more “positive” perspective telling ourselves “but Jesus says we are to love one another.”

Love isn’t about being nice.  Love can be difficult.  It often times is.  That’s what St. Paul is getting at when he said in the Second Reading – “Love does no evil to the neighbor; hence, love is the fulfillment of the law.”

God calls us not simply to strive for righteousness, to obey his laws, to seek his forgiveness and trust in his mercy when we fail, but to be “watchmen” who look out for one another; to be brothers and sisters who love one another enough to be concerned for one another.  Not just to evacuate and make sure people have the supplies and material things they need when a crisis like a hurricane is approaching – but for more important things like our salvation, our eternal lives.  To, warn one another to get the hell off of the roads to hell we find ourselves on.