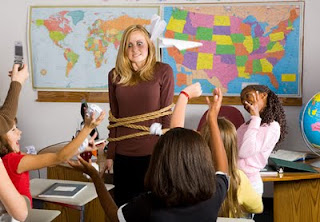 Greetings everyone!  Here’s my homily for SUNDAY AUGUST 21, 2011 – the 21st SUNDAY IN ORDINARY TIME  – The readings for today’s Mass can be found at http://www.usccb.org/bible/readings/082111.cfm.  As always, thanks for reading and your comments and feedback are appreciated.  God Bless – Fr. Jim

With Back to School Sales in full swing (if I see that stupid Target commercial with the guy singing about Denim one more time I’m going to lose it) – I can’t help it that my mind goes right into school memories this time of year.    I remember the teachers that were my favorites – 5th Grade with Mrs. Gagliardi still ranks as one of my all time favorite years in school ever…. High School English with Mr. Epps and Mrs. Allen – both extremely different, both highly memorable for a variety of different reasons – Mrs. Allen being much more formal and demanding, Mr. Epps – well let’s say he was “colorful”, insanely entertaining, but no less demanding than Mrs. Allen.   The three of them still stand out as some of my all time favorites.

Just as vivid in the memory are quite a few of my teachers that didn’t rank high on my or my classmates lists.  The ones that either we didn’t like them, they didn’t like us, or it was a mixture of the two (perhaps it’s one of those chicken and egg type questions – which came first – them not liking us or us not liking them?)

One science teacher that comes to mind, in hindsight, I believe it was us, the students, who did her in every year.  She really tried.  Every September she would have that hopeful look in her eye.  That somewhat nervous smile as the 6th, 7th and 8th grade students would pile in.  Mrs. Jones (not her real name) would talk about the various stuff that we would be doing to try to excite us for the year to come.  And no matter what she did it seemed always to turn  into a disaster.  Someone would eventually do something that would set her off – we would get out of control, she would start yelling, we would start laughing.  And we all make Mrs. Jones just lose it… in fact we kind of wanted to make her lose it.

This one time we had to dissect frogs…I’ll never forget it.  Now honestly, I wasn’t looking for trouble.  With two older brothers, the oldest who always got into trouble, the middle guy, well he was a Phi Beta Kappa honor student from Kindergarten through Graduate school.  I somehow as the youngest, fell in the middle of the two.   So I really wasn’t trying to ruin Mrs. Jones’ day.    So we were to dissect this frog.  And I’m looking that the thing, and in my head I’m saying “Nah, I ain’t touching that…”  Now Mrs. Jones had already instructed us to open it’s mouth, to make an incision here, make a cut there – I don’t know it’s gross thinking about it… but she was about 4 steps ahead and I’m sitting there staring at this dead frog.  Well she came down the center aisle, started screaming at me – thinking I was just being another nuisance, another pain, not paying attention or whatever…  And I remember she said “don’t be a baby” – which I admit ticked me off, so now I was definitely not touching the thing.  So I just said “no way, I’m not touching it, it’s nasty.” To which she grabbed the frog and said “What’s the big deal, just break open it’s jaw like this” and without the instruments or whatever, she just used her fingers, used whatever anger she had at that moment and broke open the frogs jaw.  Yes, Mrs. Jones was much more brave than I was.  I couldn’t let this, in my mind, old, crotchety teacher make me look bad so as she did it, I pointed out that she had opened the frog with her hands and then had brushed her hair.  (Which she did by the way).  The class started laughing at her, she started yelling, they made more and more stupid remarks.  It was just a bad, bad scene.  We never even finished the lesson that day… All those dead frogs were wasted.

Somehow I survived and passed the class and I never had Mrs. Jones again.  What makes Mrs. Jones stand out in my mind though is that to this day I feel guilty about her.  And I know why.  This one Sunday, a few years after I had her for class, I went to Mass at a neighboring parish for some reason.  And that Sunday I saw Mrs. Jones was there at Church. She sat there with her husband and her kids.  Then at communion, she went up and served as an Extraordinary Minister of the Eucharist.  I was too embarrassed to go up to her for communion.  Not because it was Mrs. Jones the science teacher all of us tortured in 6th, 7th and 8th grade… But because she was so much more than that.  I finally saw her as Mrs. Jones a wife, a Mother, a devout Catholic-Christian woman  As time went on I started to learn of all the charitable things she did.  The volunteer work she did at the parish.  What an incredibly loving mother she was (I actually met her daughter at a meeting a few years ago).  I had missed a whole lot more of who she really was.  Perhaps had I not been so narrow minded about Mrs. Jones, I would’ve reacted differently not just the day with Kermit’s friends, but all those other days that I dismissed her and her class.

No matter how many times we go through a similar experience, we never seem to fully learn that lesson, do we?  How our perception of someone can greatly affect our relationship with them.  That’s why Jesus’ question is such an interesting one.  He looks to his disciples and says “Who do people say that I am?”  But then quickly turns it to something much more direct – Who do you say that I am?  The responses, reactions, expectations we see and hear not just in today’s passage but all throughout the gospels show there was a variety of different thoughts on Him.  To some Jesus was simply a miracle worker.  By this point people had heard of healings, water becoming wine, massive amounts of food being supplied from a few loaves and fish…  He was definitely a master orator that could draw crowds who wanted simply to listen to him as he spoke to them.  Jesus was a brilliant teacher who could use those opportunities to pass on eternal truths that to this day even unbelievers respect.  All of those attributes and qualities are true.  But they’re narrow.  And for those who saw Jesus only as those things – or as a prophet or mistaking him for John the Baptist, or Elijah – they were missing so much.

Peter is able to discern Jesus is so much more than the sum of all those things.  He has left everything to follow him not because he does incredible feats or says memorable things…  The only one who would deserve the gift of his life, where he has dropped everything and followed him is “the Christ, the Son of the living God.”

Our perception of people very often affects our relationship to that person and our perception is greatly influenced by our proximity. How much time we spend with them.  More time allows us to know more things or aspects about them.   Peter’s confession of faith was possible because the Holy Spirit had nudged him one day to listen and pay attention that day when he first met Jesus.  And he listened to that voice and was willing to leave everything and spend his days in the company of Christ.  This allowed him to have an intimacy that he would really know Jesus– all the many things that made him perceive Jesus’ true identity as the Messiah.

I suppose our answer to that same question would also depend on our perception of Jesus and our perception is also influenced by our proximity to him.  To really know Jesus is no different than anyone else – it requires that we spend time with them and that takes…well, time!  How much time do we really spend getting to know Jesus?  “And you, who do you say that I am?”.  May you and I take time, literally, before we answer that.