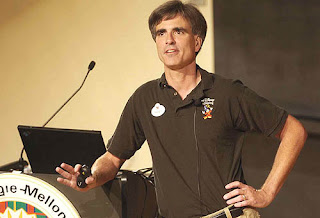 This is my homily for the Seventh Sunday of Easter.   The readings for today’s Mass can be found at http://www.usccb.org/nab/060511c.shtml-  Thanks for all of your comments and feedback, it’s much appreciated!!! Fr Jim

A few years back, in “Parade” – that mini-magazine thing you find buried inside your Sunday Newspaper had on the cover this story with the headline “MY LAST LECTURE” – with a picture of a man named Randy Pausch (April 6, 2008). Pausch was a computer science professor at Carnegie Mellon University. He was asked by the school to give what they call a “Last Lecture.” This is a somewhat common event in many universities where professors are asked to present their own reflections to the question What wisdom would you impart to the world if you knew it was your last chance.

Randy Pausch’s preparations went from a hypothetical thing where he was just reflecting on the question and coming up with some type of words of wisdom to a deeply personal, emotional experience when two weeks later he was told he only had months to live and was dying of pancreatic cancer. Professor Pausch knew he could cancel the lecture and spend time with his wife and three yong children. But instead he said “I knew I could put myself in a bottle that would one day wash up on the beach for my children, Dylan, Logan and Chloe” and then he went on to share the points of his “Last lesson” – They were:

1 – Always have fun – realizing that each of us must make a decision (which he related to Winnie the pooh) – are you a fun loving Tigger or a sad sack Eeyore. For Pausch, he says I could pack a lot of fun into 30 years. If that’s not meant to be, I’ll pack fun into the time I have.

2 – Dream Big – For Pausch, Neil Armstrong walking on the moon inspired him – we have to allow ourselves permission to dream big too.

3 – Ask for what you want – Pausch was at Disney with his 4 year old son and looking at the mono-rail, the little boy wanted to sit in the nose-cone with the driver. Pausch said he and his father thought it would be fun and that’s when his father said “too bad they don’t let regular people sit there”. Randy saud “Actually, I’ve learned there’s a trick to getting to sit up front. With that he walked to the attendant and said “Excuse me, could we please sit in the front car” and she said “Certainly” – Randy’s point – you’d be surprised that more often than you’d suspect, just ask and the answer you’ll get is sure.

4 – Dare to Risk – Randy’s point was not to worry about failing, to take some risk, realizing that experience is what you get when you don’t get what you wanted – and it can be the most valuable thing you have to offer.

5 – Look for the best in Everybody – it might take awhile – you might be frustrated, angry with people, and it might take GREAT PATIENCE and YEARS of time, but peoplew will show you their good side… Just keep waiting, it will come out

6 – Make time for what matters – Time is all you have and you may find one day that you have less than you think, and finally

7 – Let kids be themselves. Randy’s last lesson is the most personal As a professor he says I’ve seen how disruptive it can be for parents to have specific dreams for their children. My job is to help my kids foster a joy for life – I want to be clear: Kids don’t try to figure out what I wanted you to become. I want you to become what you want to become. And I want you to feel as if I am there with you, whatever path you chose.

Since he first penned those 7 points, over 6 million people have either watched the lecture, purchased the book “The Last Lecture” or tuned into one of his many interviews on different TV and radio shows. But as he says – I am honored that my lecture will live on and that people have found it beneficial. Honestly though, the talk was for my kids, and it gives me comfort to know that they will one day watch it.

Last words have incredible weight to them. If you’ve ever lost someone you loved, you probably can recall pretty readily (and with some great emotion) the last conversation you had with them.

As a Church – we’ve celebrated Jesus’ ascension into heaven. After that happened, the apostles had to deal with the fact that once again, Jesus was physically gone from their presence. The last time Jesus was gone from their presence, after he had been brutally killed and they had all failed him in stopping that they were just overwhelmed with grief. There was nothing else they could think about.

Then they experienced Jesus rising from the Dead. This resurrected Jesus stayed with them for 40 days. And kind of suddenly and surprisingly to them, they watched him Ascend into heaven. They’re so stunned, they stand there staring up into the sky until some angels tell them they have to go – While that had to have been a pretty awesome and incredible experience for them – as opposed to the other way Jesus left them – they still were upset that he was gone. So what do they do – they, like we are doing right now – gather together in prayer (first reading) and we focus on Jesus’ last lecture before he died. And in that lengthy, very poetic passage, Jesus’ central point – he says – You know why I came? You know why I’m here? You know what my purpose is? That they should know you – the only true God. And how would they (or we) know the only true God? – through Him – through the one God sent – Jesus Christ.

It’s almost like a brief pause. For 83 days we’ve focused on the Passion – Death – Resurrection and now the Ascension of Jesus. And so now it’s like we take a moment to pause and remember Jesus words before that Passion, Death and Resurrection where he tells the apostles and all of us in his Last lecture – the Glory of this event is the Glory of God done through God’s son. You can almost hear the apostles coming back from the Mount of the Ascension, recalling those words and saying “OHHHH – so that’s what he was talking about” (Sorry to make the Apostles sound like a Surfer from California).

Jesus isn’t done with them (or us!) yet, though. The disciples would soon be participating in glorious things as well as Jesus’ promised Holy Spirit comes upon them on Pentecost – comes upon us in our Baptism and Confirmation and allows us to become part of his glorious story.

Jesus’ ‘last lecture’ and Doctor Pausch’s have some startling similarities. Everyday, we need to simply – and directly – ask God for what we want, for what we need to be His people. We are called to look for the best in our neighbor, even when that ‘best’ is very hard to see. We are challenged to carve time out of our busy schedules for what truly matters – our love-relationship with our Creator, and with our fellow human beings. And if you’re going to talk about risk taking, and dreaming big – well, look at Jesus Christ – He had the biggest dream of them all, and He saw it through to fulfillment. We, as His followers, are oblidged – and honored – to try and do the same.