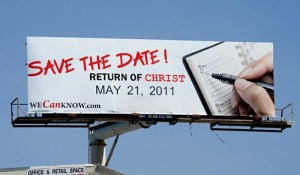 HI EVERYONE!
A short homily this week, since I’m actually not “assigned” to preach this weekend and have been a little under the weather.  The readings for today’s Mass – the FIFTH SUNDAY OF EASTER – MAY 22, 2011 can be found at http://www.usccb.org/nab/052211.shtml .  Thanks for reading and your feedback, as always is appreciated!  God Bless- Fr Jim

May 21 came and went.  There was no catastrophic earthquakes striking around the world at 6PM in each time zone bringing about the beginning of the end times.  Thank God…

And isn’t that what’s been lost in all of this hoopla, this quasi-hysteria about the Rapture?  Instead of focusing on Thanking God, which should be our daily prayer – the world has focused it’s attention on the rambling’s of one terribly misguided and end-of-times obsessed individual.

The millions of dollars in advertisements taking out warning people in a sense opened the followers of the apocalypse up for skepticism.  There were Front page covers around the world with mocking headlines.  The NY Daily News gave the entire front page to the words  “Buy This Paper!  If it’s the last thing you do” – the Star Ledger used over 3/4 of it’s top of the fold paper for a graphic “THE END IS HERE *or maybe not”.  I was even invited to a “Post-Rapture looting party” on Facebook.

One preacher, and his followers were able to get this type of world-wide attention (only now to fade into oblivion once the post-non-Rapture stories are boring and we’re intrigued by the next great media-creation) Some observers maintain that because of the rough economy, the numerous instability throughout the world that the belief that the world is coming to an end doesn’t seem that far fetched that this preacher, this message was able to gain momentum.

I don’t know.   The sad thing to me and the irony is that all of that over-emphasis on a mis-reading of the bible that no credible theologian or Church gave any credence too has been played to death and only helped add additional levels of skepticism, sarcasm, and doubt to some people’s fragile faith lives.  Helping them to discount the Gospel as unreal as the predictions of the rapture were.

Which is beyond sad, particularly hearing this Gospel.  Because if the realities that are affecting all of us which caused some of this fear-preaching, how much more do all of us need to hear the words our Savior speaks to us, lovingly saying:
Do not let your hearts be troubled.
You have faith in God; have faith also in me.
In my Father’s house there are many dwelling places.
If there were not,
would I have told you that I am going to prepare a place for you?
And if I go and prepare a place for you,
I will come back again and take you to myself,
so that where I am you also may be.
Where I am going you know the way.


Yes, there will be an end times.  An end of the world.  An end to our own time on this world – which will come first, is the Lord’s calculation – not a radio preachers or anyone elses.  But Jesus has proven in this Easter Season with his rising from the dead – which validates every other promise he has ever made – that those end times do not need to bring us fear, or trouble our hearts.  If we do one thing – have Faith in God and Faith in Him.

For 2,000 years, since Jesus first left His Church to His Apostles with the promise he would return, we’ve joyfully awaited that day.  In the meantime He commissioned us to go and spread His Good News…That is good news.  That if we reject all the other material gods that manipulate our time, distract us from Him, confuse and frighten us.  If we turn away from the false prophets who preach gospels of their own creation or manipulations and distortions of His true word.  If we turn away from that, and simply look to Him as the way, the truth and the life, and commit to that – then we won’t have fear today, tomorrow (if it should come) or the next time a rapture is said to be coming.