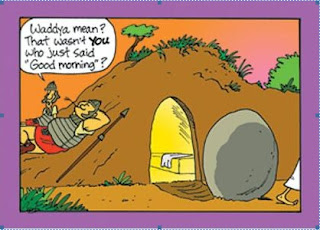 HAPPY EASTER!  ALLELUIA!!! HE IS RISEN!!!Here’s my homily for EASTER SUNDAY – THE FEAST OF THE RESURRECTION OF THE LORD – April 24, 2011.  The readings for today’s Mass can be found at http://www.usccb.org/nab/042411.shtml .  Thanks for reading and your feedback – HAPPY EASTER!  Fr. Jim

I must confess that at times I am not the greatest influence on my friends when it comes to calling their attention to junk television shows that they inevitably start watching because of my suggestion.  Not junk like “Jersey Shore” – that’s a whole different class of trash (my apologies Paulie, Snookie and to all their fans).  Junk as in, well, I don’t know exactly how to classify it.  It’s best just to give you the most recent example that I’ve gotten more than a few friends of mine to watch.  It’s on the cable channel Spike TV, which is the manly answer to Lifetime – it’s “Television for Men.”  So as a man I felt an obligation to check the channel out.  As I did, a couple of months ago, this program came on called “A thousand ways to die…”  It is stupidity at its extreme.  They recount stories from police, news, coroner reports that talk about really stupid things that people have done that caused their death or the death of their friends around them, and dramatically re-create them for you.

On New Year’s Eve this past year, being laid up with bronchitis, this was my choice of entertainment for the evening.  (Gives you some clue as to how I was feeling)  One story was of these two drunk idiots who got into this huge plastic sphere (think of those plastic balls that hamsters run around in, but for humans), and decided it would be fun to run down this steep hill in the ball.  As they picked up more and more speed they violently ended up slamming into each other with such power and with their full body weight (and these weren’t slim men) that they literally bludgeoned each other to death.

In another episode focusing on people from another culture, they told (and showed) a father who really disliked his daughter’s boyfriend.   So to kind of call the guy out and embarrass him, he invited him to a dinner, (which the young man knew in that culture he had to attend if he had any chance of remaining with his girlfriend) where they would dine on live seafood… not sushi, fish that was still squirming and all…(yeah I didn’t know these things happened) With each course, the challenges got more and more difficult – with the father and the young man rising to each challenge by eating each dish in this bizarre duel.  Till the last one – an alive octopus.  The young man looked at the slimy fish moving on his place and just shook his head that he wasn’t going to eat it, as the father took his chopsticks out, put the entire thing in his mouth, and ended up dying of suffocation when the fish fought back as he tried to swallow.

Sorry if I grossed you all out. . . or if I’ve encouraged you to waste your time in checking the show out for yourselves (I’ve already apologized to a bunch of friends who never knew about the show and now find themselves watching it) But something sort of hit me about it as I was trying to figure out if I was sick and twisted for watching this show…

Everyone of us from our own experiences, our own lives knows how un-funny, un-entertaining, un-amusing death truly is.  And that there’s far more than a thousand ways for people to die.  Whether that occurs through stupidity like those recounted on a program on Spike TV, or through the enormous tragedies, natural disasters, sickness and disease, the evil things human beings do to one another.  Death at some point, in some way affects every single one of us.

Jesus’ having been betrayed, abandoned, mocked, scorned, tortured, unjustly condemned, crucified and buried would have been more than enough to end a group of mis-guided, brain-washed, foolish fishermen to snap out of whatever delusional spell they had been under for three years.  Those horrifying images and terrifying days would have been enough to cause them to explain away the countless miracles; to erase the teachings that they had heard which they treasured in their hearts; to eradicate the life-changing encounters where Jesus spoke to the pain of someone’s personal failures and sinfulness, offering them forgiveness.

A stone removed.
An empty tomb.
Burial cloths rolled up.

Those first things, that first day of that first Easter that opened the eyes of the hearts of the first followers to understanding everything had changed.  They would be seeing something more miraculous, more unprecedented, earth and death shattering than they had ever imagined.  Those first things got them moving, got their hearts pumping again.  Those things made it possible for them to talk openly and recount in graphic detail all of the horrific things that had happened a few days earlier, because it was no longer a story of defeat for Jesus, or a threat of what could happen to them.  It was in fact, a beginning – a beginning that would change the world forever.

Remarkably this isn’t just His story.  This Jesus who has died and has risen from the dead remains with us here.  In our baptisms we have been born again as members of His family.  In this proclamation of this Gospel, we hear his words of everlasting life.  In the Eucharist, his living Body and Blood are given to us.  This Easter, the true feast we’re invited to partake in is not the dinners, the chocolate bunnies, or gorging on whatever it was we’ve fasted from through these 40 days of Lent.  He wants us to feast on Him.  To rejoice in Him.  To know that in following Him, while there may be 1,000 ways to die, in the miracle of Easter we come to know that there is only one way to live eternally – through Jesus Christ.  He still invites us to come and follow Him and His example.  Not for His sake, but for ours.  He did not suffer and die for His sake, but ours.  Come.  Let us follow.