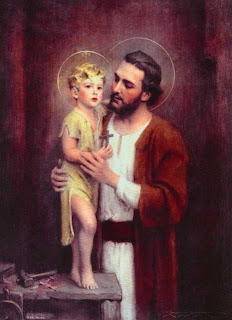 Hi everyone, here’s my homily given at Saint Agnes Church, Clark NJ on Monday, MARCH 14, 2011 for the Annual St. Joseph’s Novena

When I was asked to speak on tonights topic: SAINT JOSEPH FAITHFUL SERVANT, something hit me about that right away.  From the moment Joseph learned he was going to be a Father, his life became focused on one purpose “to be the personal servant of Jesus Christ.”   For those of you who are parents, you probably are nodding your heads recognizing what was so obvious about that.  Every good parent from the moment they receive news they are going to become parents, begins a lifetime of service to their child.  There’s never an age when they stop thinking about their children.  I’m 37 years old and look, my parents still have to check up on me!  But seriously, I’ve shared this with the college students who, just beginning to fully experience that taste of independence and freedom and want to know why their parents “just don’t understand” (or sometimes “they’re so annoying”) – well I try to say to them- “Guy’s that’s there job!  From the moment they learned you were coming on the scene, you wrecked their lives (mostly in a good way) – you will never leave their minds or hearts – even though they want you to grow up and be on your own – you are their responsibility and their lifelong service to you will never end.

Knowing how crazy challenging this can be for both parents and children to deal with this notion, this lifetime of selfless, loving service, now let’s throw another wrinkle in it to think about our friend Joe – St. Joseph.  Sure every parent thinks that their kid is God’s gift to creation – St. Joseph and Mary were really right.

Yes, this was no ordinary child.  Nothing was ordinary about any of this.  That Gospel we heard – that was no ordinary way for Joseph to learn he was going to be a parent (first Mary tells him the news and then he has this dream inviting him intimately to be a part of all that God wished to accomplish)

How was St. Joseph able to be this Faithful Servant?   To believe all of this… To trust all of that the Lord was proposing to him.  Well the best way I’ve come to understand how he did this was by remembering how this devotion to St. Joseph taught me how to do that in my life.

It was right here in this Church, probably the second or third year that we were doing the“Novena to St. Joseph” here 20 years ago… March 1991.   I got home from Arthur L. Johnson (when it was still REGIONAL High School) and right there on the kitchen table was a letter from St. Joseph’s University in Philadelphia.  I had applied to four different colleges, and gotten accepted at three of them, but this was the one I was waiting for, and I mean THE one.  It was my top choice.  I had gone on the tour really fell in love with the place.   It just seemed like the place for me… Reminded me of the colleges my brothers had gone to with the stone towered buildings and all.  It was close enough to the city, but not in the city; a university, but not a huge school; Catholic.  It just seemed a perfect fit or exactly what I had imagined that I wanted…  Again for parents, you can attest to how annoying that whole process can be (Now that I work with college students, I’ve apologized to my parents) Anyway, there were two things I needed  1 – To get accepted and 2 – To get $4,000 in aid to supplement the amount my parents were paying to make this all work.  So here it was, I had just finished the St. Joseph’s Novena, it was the St. Joseph Feast Day and on the table the letter I was waiting for.  If only God were this direct in all our prayer requests I thought.

I opened the letter, and there it was – an acceptance letter, with an attached letter saying I had been awarded a scholarship for $4,250 a year.  Everyone was excited, I was excited, I couldn’t believe it, I had gotten everything I wanted everything I had prayed for and I was convinced that it was divine providence that it should happen that day.  And I still smile at the fact that 5 months later I would be driving to De Sales University a much smaller school in Allentown Pennsylvania that in many ways was the complete opposite of St. Joes (for one thing there were no stone towers – just an awful lot of cornfields) where I spent four very happy years there.

What happened?  20 years later, I’m convinced that I had my first experience of true prayer when prayer changed me.  Here I had been going to this Novena with my wish list each night – with very specific wishes –  in a sense trying to get someone else up there to help me wrestle a couple of favors from the almighty, a couple of gifts.  Excuse me Lord – I know you’re busy, but if you could spare a few minutes, how about getting me into this University with a little cash (He is more generous than most Financial aid officers are).  I was good – I made EVERY night of the Novena, even when some speakers were a little too long, even on FRIDAY NIGHT I went to the Novena (convinced that the power of Novena prayers could make up the deficit to my S.A.T. scores) and I got my reward.  Yet 4 weeks later I completely changed my mind.  My initial excitement was legitimate, and as Allentown called to see where I was in my decision I said “I just got accepted to St. Joseph’s University” and the woman who I had gotten to know by now said “Hey that’s great Jim, Congratulations.  I know you were really hoping for that.  We’re sorry to lose you to them, you’d be a great addition to our family, but you have to do what’s best for you.”  Something hit me as I hung up – could I have missed what was perfect for me and right before my eyes, simply because I was so focused solely on what I wanted?  All of a sudden,  the genuine goodness of these people as well as the terrific qualities and aspects of DeSales University that I had blinded myself to shined through to me.  I hung up that phone.  Thought about it and said to my parents, “I think I’m going to go to DeSales” – and my father laughed and poked my mom and said “I told you”.  Glad they didn’t kill me for putting them through that back and forth, but being the third time they went through with it, they probably were well prepared.

So often we approach prayer as looking to get our wish lists answered.   And it’s not that there’s anything wrong at all in bringing our hopes, our desires, our wishes to God.  There have been times that people have told me of miracles that have happened – absolute miracles, no question.  But more times than not, the miracle isn’t that they’re loved one is cured of cancer – but that the person is not as wracked with fear, or that they have a strength to face the disease and treatments for it they didn’t have before.  Or The person didn’t magically get that certain job, but they are at peace and confident in who they are as a Child of God, and that confidence changes them as they apply for that next job… (which not surprisingly, often works out to be a much better fit)

And that’s the thing prayer is not about us getting things, but rather openning us up to a deeper relationship with God.  Not asking Him simply to change this situation, but to show us how he is present there already, how we can deal with the situation in front of us.  Right now, we look somewhat hopelessly at pictures from Japan right now.  Secretly, or maybe not so secretly, we wish we could go back in time and warn people – or that miraculously no one would have been killed – or – something… we just don’t want those pictures and stories to be as dreadfully real as they are.  Our prayers are meant to help us see that God was there a week ago before anyone ever imagined what was going to happen.  That God was there in the midst of that crisis.  And God is there, and active in countless ways now.  Prayer isn’t about going to some magic genie to get what we want… It makes it easier for to see God’s presence, action, and what he’s calling us to do right here and now.

Which brings us back to St. Joseph and why we look to St. Joseph as this powerful saint.  A few years ago this Jewish woman that my mother worked with and who we’re friendly with saw me one afternoon- she went back into her office and came running out saying “Just the priest I wanted to see – I got this statue of St. Joseph and I know that I’m suppose to do something with him so I can sell my house finally.” I said “what” she said “Look – I’m a desperate woman, I’m calling in the big guns on this one so tell me what to do” I said “Do you think if you burry a Jewish guy in the ground he’s going to help you sell your house?”

He could let the words of the Lord spoken through an angel not seem like some crazy, random dream – but really made sense to him.  He could let go of his own hopes, dreams and desires in light of these miraculous happenings.  That had to have been painful and confusing.  Mary would remain a Virgin… This child would not be his own flesh and blood…  Yet, he doesn’t argue, debate, pout, threaten never to pray again since he didn’t get his way… All of this made sense to Joseph because He was confident that God was always with him.    And as the story would change, he remained faithful.

As you come to this Novena each night, each year, so many of you come with very personal intentions.  Some of you are carrying heavy burdens, heavy crosses that you feel might crush you.   Some of you have many concerns or worries.  It’s easy to fall into the thought process that if I do this for nine days, then God HAS to give me what I want or St. Joseph didn’t do his job and I’m through with him…  But that’s now what this is about.  May our devotion to this Saint open our hearts even more to experiencing how much prayer can change us, how God can change us if we let him… May St. Jospeh, the faithful servant to Jesus Christ be an example, a witness, a friend who intercedes for us, a witness to his foster-son who is with us, helping us carry whatever burdens we bring to this novena that Jesus is triumphant over, and wishes to help us triumph over as well.  May our devotion to this Saint bring a sense of calm, a sense of peace to all our fears and burdens.  For all of us, especially the People of God of St. Agnes Parish, who know this already – but may we be renewed in confidence that St. Joseph does indeed pray for us…