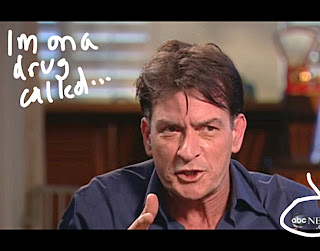 Thanks as always for reading and your feedback… HAVE A HOLY AND GREAT LENT!!! Fr. Jim

So about a week ago, being stuck in one of our routine traffic jams, and trying not to lose it that a 20 minute ride was becoming 2 hours, I was listening to Sirius Satellite Radio when I heard them announce that they were adding a new channel to their lineup… You ready for this?

Tiger Blood Radio. That’s right – a 24 hour limited run entire channel that would examine, as they put it – all the news, facts and media frenzy surrounding Charlie Sheen. If I wasn’t aggravated enough by the traffic, now I was really annoyed. Because no matter how much I try not even to pay attention to what is either – another bizarre Public-relations campaign designed to garner more popularity (as twisted as that is, we know that’s a possibilty) or, (sadly, more likely each day…) watching yet another actor self-destruct… it doesn’t matter, you can’t avoid hearing about this celebrity and all that’s been going on in his life.

Like most of you, I’ve heard more about his alcohol and drug abuse, his sleeping with multiple partners and so on than I ever wanted to. In one of these endless numbers of interviews, he was asked a serious question. Looking at his really erratic behavior, especially over the last few weeks, the reporter asked whether he was taking any drugs that could explain this behavior. His response has become a punch line – “I’m on a drug and it’s called Charlie Sheen.”

What was remarkable about that was that in a sense, that phrase kind of summed it all up pretty perfectly. At the root of all sin is complete self-absorption, not to mention self-destruction. Watching and hearing all of this, you cannot help but feel sadness at a man who’s so obviously trapped in this life of sin that he doesn’t realize or doesn’t care about the damage he’s doing to himself and to those around him who do love and care about him, especially his family. Yet it seems no one can break through to him, after multiple attempts, as his career, HIS LIFE seems to be falling apart.

But part of the reason is that things haven’t really fallen apart… yet. In fact he’s become like some cult-like hero. His behaviors and actions are being celebrated and glamorized. Something like more than 2.5 million people are “following” him on Twitter, which is the fastest number of people to follow someone on Twitter in their history… There’s drinks being made in his honor… T-shirts with his catch-phrases. The media will continue to cover Sheen, even dedicating an entire radio channel to his exploits, as long as we the public continue to consume the drug called Charlie Sheen. Buying into his fame – wondering what the “bad boy” is up to today and in a sense validating the self-absorption, and self-destructive behavior. Maybe, if we tuned out, he could realize the harm he’s doing to himself (not to mention to ourselves by even paying as much attention as we do). But I wonder if part of the reason so many of us get caught up in these stories and the many more that have come before and after it is that it distracts us from our own self-absorption, our own self-destruction, our own sinfulness.

Which is why we need Ash Wednesday. Something (or rather, someone) in our hearts draws us here. We seem drawn to come here to receive this smudge of dirt on our foreheads. And as we do, we hear the words Remember man you are dust and to dust you will return. Those were the words of the Lord to Adam and Eve as they leave the Garden of Eden. The result of their self-absorption led to their self-destruction. God’s words and these ashes are meant to be a stark reminder to us that if God were to take his Breath of Life from us – no matter how often we delude ourselves to thinking that no it’s not the same as Adam and Eve, no it’s not like Charlie Sheen – I’m not that bad… no matter how important we think we are, tough we are… were God to take His loving glance off of us, all we would be is a pile of ashes.

But it’s not!!!! Because the Great Hope that Jesus Christ came to this world to proclaim to all of humanity is that you and I are made for so much more than what the world tells us… the sin that the world seems fascinated by, glamorizes and chooses to celebrate, that deep within, we know just doesn’t seem right.

It’s not, which is why we need Ash Wednesday, we need this season of Lent. We’re recalling how Jesus entered into the desert for 40 days of fasting and prayer before he began his work of proclaiming the Kingdom of God was at hand. And so Jesus invites us to join him in that experience. To make these next 40 days a time of fasting and prayer… A time for us to take an honest look at our lives and see where our self-absorption is doing damage to us and to our relationship with the Lord and one another.

Today we as a Church are asked to “fast” to limit the food we eat to simple, meatless meals, and to refrain from eating meat on all of the Fridays of Lent. Each time our stomachs growl it’s an opportunity for us to turn away from saying why can’t I eat that… I’M HUNGRY … to making it a physical prayer – where my whole body begins to say – I hunger for you O Lord. In addition, maybe you want to do something personal yourself – to give up coffee, or drinking. Some of your peers gave up facebook and texting. I know! But the idea isn’t like an endurance challenge – it’s to say, none of those things are even remotely more important than God is in my life.. Sure I like those things, but again, it’s like my whole being starts to say – but I desire you more O God.

Almsgiving – we often think of that as giving money to the poor, which is one aspect of it. But perhaps you don’t have a lot of cash (most of you are poor college students) – so maybe you give of yourself sharing your time and talent. If you want to do that in community service of some sort, that’s terrific – but maybe our “alms” and sharing of time will be just with each other. Think of family members or friends that if you really think about it, you haven’t had a real conversation with them. You’ve sent a facebook message or a quick text – but perhaps you haven’t had time to really spend time with your little sister or your parents…you haven’t had a meaningful conversation where you asked a friend how are you doing, really? Without interrupting them to tell them how you’re doing…

And finally, prayer… Prayer at its most basic level is conversation, communicating with God. Developing that personal relationship with Jesus. Learning how much Jesus loves us and desires our full, rich, happy lives. But we can’t know that, experience that if we never spend time with him. We don’t need to over-complicate it. Maybe you have gotten out of the habit of going to Mass on Sundays – today’s the day to recommit to it. Maybe you haven’t been to confession in a long time – make this Lent the Lent that you will experience the most profound love of Jesus Christ as in the sacrament he says to you – your sins are forgiven.

Basically we are here to acknowledge that all of us are sinners. We are prone to self-absorption, as well. We might not be on a drug called “Charlie Sheen”, but we could probably see times, or areas in our lives where we’ve been addicted to a drug called (insert your name here). With these ashes, with our turning away from those things that distract and detract from Christ, and with our turning towards Him, we finally can break the addiction.