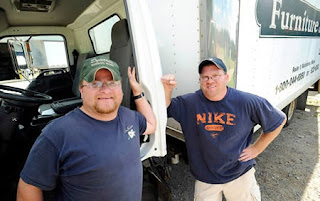 So this guy, named Gary Nisbet works as a furniture delivery man at a store in this small town in Maine. The business kept doing well, growing to the point that the number of deliveries increased, so much so the store needed to hire additional help. So they put out some advertisements announcing they had a position open. After the applications and interviews were completed, the owners of the “Dow Sleep Company” hired a guy named Randy Joubert.

Randy and Gary start making deliveries and working together on a daily basis. Pretty quickly, people started are asking them if they were related. Which looking at the guys was understandable. They were only about a year apart in terms of their ages, they both had fair hair, wore glasses. They both had stocky builds and both happened to have goatees… Wearing a baseball cap only added to their similarities.

Some months later, after the two had been working together day in and day out, one afternoon Randy said “Gary, I’m going to ask you a strange question: Are you adopted?’” Gary gave him a strange look and answered, yes, he was adopted. Randy then asked if Gary had ever learned his biological parents’ names. Gary said yes he had through a court request. When Randy recited the couple’s names – Gary was kind of shocked and a bit freaked out and asked “Randy, how did you know that?’” Then Randy added one last detail – asking if his birth day was June 10, 1974, which confirmed he had found his long-lost brother.

The two had been separated after Gary’s birth when their parents decided they couldn’t afford to raise both kids and gave the younger one up for adoption. And yet somehow the two of them ended up working in some little tiny town on the coast of Maine. The odds that somehow they would not just bump into each other after 35 years apart..but wind up working together side by side for days and weeks, only to discover they were long-lost brothers seems astronomical, don’t they?

You have to wonder after the surprise wore off, how they felt, or what types of questions they had. Particularly when they realized that they actually grew up in neighboring towns, going to rival high schools. (Some adoption agency, huh?) Reading the story, I couldn’t imagine, what they must have gone through in this unexpected reunion. For all that time, all those years, only a few miles apart and these two men never knew their brother was so close. 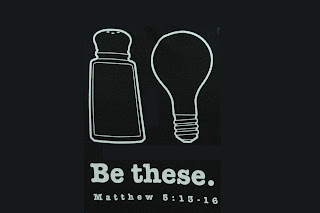 More than likely this Gospel passage is a familiar one. Unlike some of the parables or teachings of Jesus that need some historical context or explanation, Jesus’ choice of imagery thousands of years later – even in our modern world which is concerned about high-sodium diets and light pollution – is easy to understand and relate to. Salt and Light are things that transform things dramatically, almost instantly. A sprinkle of salt can alter the taste immediately. A flick of a switch and you go from stumbling in a room to seeing every hazard or obstacle in your way. Salt and Light are powerful things.

So when Jesus charges us to be “salt” of the earth and “light” of the world – he’s telling us that, yes, it is possible for us to transform the tastelessness and blandness of indifference; reminding us that he’s gifted us with the ability to take his light and eradicate the darkness of sin and evil in the world.

We hear those hope filled visions from scripture and want to believe them. But the challenges seem so huge. The lists of people, places that need the salt and light of Christ seems to grow day by day. Homelessness and starvation isn’t relegated to some distant far off country – it’s right here in our midst, in our cities (on our own campus)… The attacks on the dignity of every human life from abortions that continue to legally kill millions, to the bullying that is done which has the potential to kill a person’s image of themselves… Wars continue to rage. Sickness and disease continue to afflict and diminish people. Thinking of all of those things – and countless other examples that could easily be added to our list – when we hear Jesus telling us that through Him we can eradicate all of those things – it sounds too good to be true. But if we believe in Jesus… if we trust in Jesus… we know he’s not lying to us… we know he’s not setting us up for failure. So how come it seems we seem stuck in the same spot?

Which is what brought that story of Gary and Randy to mind It seems impossible to try to imagine yourself going through that discovery or trying to relate to what they experienced in learning they’re long lost brother was so close and in fact they were working together. But in a way, it’s might not be too hard to imagine or relate to after all. At our Baptisms, we became brothers and sisters with Jesus Christ and one another. Yet, doesn’t that reality seem hidden? Like the two men unknowingly being brothers, we might see some things that make us appear like we’re related. We see each other wearing a crucifix, or a cross. On Ash Wednesday it seems even easier to see those Christian similarities as we’re all marked on our foreheads. Even as we gather here week after week. We can get into a routine and know the prayers and responses – know each other, see each other at school, work, we may even be friends with one another and go so far as knowing each others name at the Sign of Peace.

But do we really acknowledge Jesus as our brother? Do we recognize him in one another and see each other as Brothers and Sisters in Christ? Because in order for us to make Jesus’ vision a reality, the “salting” and “enlightening” has to start here. Among ourselves. Seeing ourselves, treating each other as brothers and sisters. Caring about each others physical, emotional, spiritual needs in the day to day – rather than just fulfilling an obligation here at Mass and then not even acknowledging each other as you’re walking on campus [or cutting each other off in the parking lot racing for the exit]. It means we have to love enough to do that uncomfortable task and reach out and invite our “siblings” who aren’t here with us to come back.

Unlike Gary and Randy, the blindness to our siblings among us isn’t because we never knew they existed while living so close. It’s often a result of our choosing to be blind to them and our responsibilities to one another as brothers and sisters in Christ. Unless that changes, we cannot “salten” or “lighten” anything. The flavor and brightness of Jesus will continue to remain a hoped for vision to a world that has waited too long already.