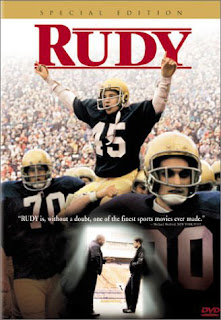 Hi everyone – here’s my homily for the FOURTH SUNDAY OF ORDINARY TIME – Jan 30, 2011. The readings can be found at http://www.usccb.org/nab/013011.shtml – As always, thanks for reading and all of your feedback! Fr. Jim

So how many of you have seen the movie Rudy?

A few weeks ago I saw it probably for only the second time ever. To be honest I had kind of forgotten about it, and had some reluctance to seeing it. Why? Well, two reasons really. First I’m not a huge football fan. I like football and enjoy watching it, but I’m not a huge fan (not like baseball – another time, another homily)

The second is that I’m the youngest brother, and when you’re two older brothers drill it into you the entire time you’re growing up that “we hate Notre Dame” – you just don’t question it. There’s no rationale, reason or logic behind the hatred. (Well, I’m sure if my brothers were here they could give you their lists of reasons) But honestly, they did a good job… I’m 37 years old, consider myself a somewhat sane, reasonable individual – but when I see the logo, the leprechaun guy, hear the Notre Dame song – it’s like pavolov’s experiment, they must’ve punched me or something because everytime “the Fighting Irish” comes up – I just have a natural aversion. Which is too bad because I had forgotten what an awesome movie this is.

For those of you who’ve seen it, (and if you haven’t – rent it today, it’s perfect a week before the Super Bowl and who wants to watch the Pro-Bowl) Rudy is based on a true story about a young man named Daniel ‘Rudy’ Rutieger..a young guy who’s only dream is to play football for Notre Dame. But there’s a few obvious problems which explain why his family and friends think he’s crazy to even have this thought. He has always too small to play football – whether it’s in the backyard with his brothers and neighbors growing up- or even as a young man trying to get into college. Physically he didn’t have the build to be a football player. Then there’s the fact that his grades in high school were abysmal. So not only did it appear to nearly everyone around him he would never even be considered for the football team. . . even getting into the University seemed impossible.

Kind of a terrible movie if it ended there? So we follow Rudy as he saves his own money working with his father and brothers in a factory. When Notre Dame turns him down after he just shows up one fall morning looking to register, one of the priests on campus encourages him to go to a local community college and get good grades, and re-apply, which he does… he works his tail off every semester, applying every semester and getting rejected every semester… He works as a groundskeeper (you guessed it, in Notre Dame’s stadium) just so he can be near the place where he ultimately wants to be. A bulk of the movie seems to follow Rudy studying, working, praying as well as training for football… Finally he gets into Notre Dame. His only shot at playing football is as a “walk on.” The “Fighting Irish” basically have scholarships and scouts to recruit ever member of their team (one reason that my oldest brother hates Notre Dame) So they have a few spots where a guy can try out to be on the “practice squad” so that the real team can practice against live bodies before a game. Against all odds, Rudy makes that squad and is so excited that he treats every practice like he’s prepping for the Super Bowl.

For Rudy to be considered an actual member of the team, to prove to his family and friends that he is an official member of the team, he must actually be able to suit up for a game, be on the official team roster and play one play. Often times the coaches would allow a senior who has been a “walk on” to have that honor. When it appears the new coach, who arrives Rudy’s senior year, is only interested in making sure Notre Dame wins and isn’t interested in that tradition, Rudy has a bit of a melt down as the last game approaches. He quits the squad before the last practice. He storms out of the locker room. He goes to the head groundskeeper, named “Fortune” who he had befriended over the years and tells Fortune that he has quit the team, how unfair this has been, that he’s done with Notre Dame and seems angry at himself that he had even chased this seemingly unattainable dream. 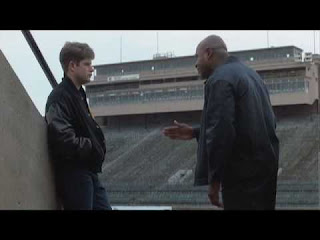 This leads to probably my favorite scenes in the film. Fortune says to Rudy You’re 5 foot nothin’, 100 and nothin’, and you have nearly a speck of athletic ability. And you hung in there with the best college football team in the land for 2 years. And you’re gonna walk outta here with a degree from the University of Notre Dame. In this life, you don’t have to prove nothin’ to nobody but yourself.

If only he said “Blessed are you Rudy” it would’ve been the perfect tie in to the Gospel today. But the scene still works – and for me, that could’ve been a great place to end the movie (but I’m not a director, so I won’t ruin it for you if you haven’t seen it)

Fortune is smacking Rudy in the head to have a shift in perspective and is saying as Rudy had fixated simply on one pipe-dream of a dream, he has missed some pretty spectacular things that have been going on around and in him. And if he doesn’t wake up, he’s going to be a bitter guy who throws all those blessings away because he can’t achieve simply one of his dreams, one of his desires, one of his goals.

In listening to Jesus in his famous Sermon on the Mount, which in the Gospel of Matthew is His first lengthy teaching, address – He is doing something similar. As Jesus lists all of those whom He considers “Blessed,” they don’t seem to be the individuals we’d think would fall into that category. For the most part, when people talk about themselves or characterize someone else that way – saying that they are blessed – it’s usually talking about something good, something great… something that other people would want – a state in life they wish they had.

Yet looking at the people Jesus labels as Blessed – well they seem to be the exact opposite of what the world tells us to aspire for – the poor in spirit (basically those who have nothing in this life but their faith in God); those who mourn (not just those who have experienced death, but those who struggle with sin in their lives and “mourn” over the fact that they struggle with that) the meek (those who seem powerless, insignificant to the world)…

In all of these categories, you could kind of mistake what Jesus is saying – seeing Him giving a type of pep-talk for his followers to refer to when we’re going through rough times. “BUCK UP BUCKAROO – YOU’RE BLESSED!” If that was the case, then Jesus is being insincere.

Instead, Jesus is trying to give us a smack in the head and change our perspectives about who God is and how He relates with us. What Jesus is trying to break through to us right at the start of his ministry is that God isn’t rewarding people with things, opportunities, experiences that most of us truly desire. So just because that guy won the lottery, or that woman is incredibly intelligent and has a great job, or that classmate seems to be able to get good grades with minimal work – none of that is saying that in God’s eyes those individuals rank any higher than any one else. In fact, those things can become a burden because those things can warp a persons perception of who they are and who God is. They can easily think that somehow they deserve God’s favor more than others. Or even sadder, that God has nothing to do with them… that their successes, their triumphs, their “blessings” is something they achieve and experience on their own.

In this sermon, with these Beatitudes, Jesus reveals his radical view of what it means to be a member of God’s family. The days of comparing ourselves to one another are over. The lies we tell ourselves that I’m better than this person or not as good as someone else because of what they have, what they do, or who I am are clearly over.

Too often we look for the Hollywood, movie-like ending in our own lives. We want the crowd chanting “Rudy” for us (well, with our names instead) – We desire that promotion. To win the powerball/mega millions jackpot. Thinking then, THEN we will be “blessed.” Imagine if we allow the love of God speaking to you and I right now in this Word to really possess our minds. Imagine if we allow the amazing love of Jesus Christ that he empties himself, becomes present in a stale host and some common wine so that we can consume Him – if that love consumed us… If we did, would there be any question how blessed we truly are?