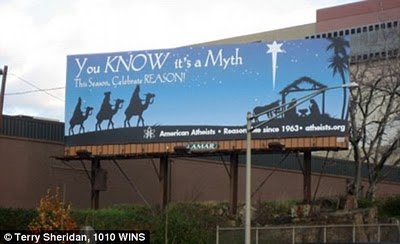 FOR UNTO US A CHILD IS BORN!!! ALLELUIA! MERRY CHRISTMAS!!!! Thanks for stopping by to read my homily for THE NATIVITY OF THE LORD – Given on CHRISTMAS EVE, DECEMBER 24, 2010 at the Church of the Immaculate Conception, Mahwah NJ. The readings comes from the Vigil Mass of Christmas – http://www.usccb.org/nab/122510a.shtml – A VERY MERRY & BLESSED CHRISTMAS TO YOU AND YOURS! Father Jim

Almost as soon as the Thanksgiving turkey has been digested, an event that’s becoming an annual tradition begins. The so-called “war on Christmas.” Lawsuits are waged yearly over whether singing a Christmas Carol mentioning the very name of Jesus Christ or having a display that represents his birth in public arenas violates the separation of Church and State (by the way, it doesn’t… but that’s a discussion for another day). Interesting that some of those same people don’t seemed threatened over songs about a four-hooved, antlered being from the North Pole with a radioactive-red-lighted nosed (quite possibly contracted from a nuclear power plant or toxic nightmare) flying overhead. The message from these battles each year, though, has been pretty clear in terms of the celebration of Christmas (or ‘the Holiday Season’) – Rudolph and his friends are OK; Jesus, not so much.

This year though, things took a turn from those who are in the “anti-Christmas” camp. A billboard of the Nativity Scene, placed right outside the Lincoln Tunnel greeting drivers going from New Jersey into New York City, showcased the words, “You KNOW it’s a Myth; This season, celebrate Reason!” In the several weeks the billboard has been up (I saw it about 3 or 4 times while stuck in traffic) a thought came to my mind. If you look at that message and think about it for a moment, you realize that this seems different from the usual debates that dominate the cable news networks’ coverage of the “WAR ON CHRISTMAS.” This message seems angry or condescending, as if the atheist group thinks we’re stupid for celebrating Christmas. I wonder, how many of us who aren’t Buddhists and don’t follow the teachings of the Buddha, would spend time and energy looking for publicity to target that group of believers; how many of us would want to tell them how wrong their beliefs are – even to the point of going into an area with the largest number of Buddhists, putting up a billboard saying, “You’re WRONG?”

That’s why a thought hit me that this billboard, rather than making a statement, seems to be asking a question – What is the reason we celebrate Christmas? Maybe the story of Jesus Christ does seem too good to be true. The idea that there’s a God who does love us, cares about us, thinks of each of us personally, individually as his own blessed creation seems a bit too good to be true. That this God, who has loved us for all eternity, would actually want to enter into this human drama of ours; to try to break through the craziness of our lives; to get that message through to us; well it sounds like the beginnings of some great myth…

But there’s an element about the Christmas story that escapes those who solely focus on those eternal truths and skip over the human drama that surrounds the Christmas Story. So let’s look at it again . . . We just heard tonight about these two people – Mary and Joseph – whom the Gospel tells us “were betrothed, but not living together.” Being “betrothed” was more than just what we would understand as engagement. Betrothal was the time when the couple was already legally married but before they lived together. From the betrothal on, they could only be separated by death or divorce (which wasn’t very accepted in ancient times).

So Mary shares with her betrothed, Joseph, what the Angel Gabriel has told her. How she had conceived a child by the Holy Spirit, how this Child was to be Jesus and what his birth would mean for humanity. And we read Joseph her husband, since he was a righteous man, yet unwilling to expose her to shame decided to divorce her quietly. That one sentence tells us a lot. Joseph is identified as a righteous man. Learning that he would not be the biological father of the child his wife was carrying was something that could have brought incredible shame to him. Had he been simply self-focused he could have demanded that his righteousness be protected. He could have divorced Mary publicly, not even entering into the debate about this (far-fetched) story that Mary was presenting to him. He could have let the courts, authorities, public, gossip all have their say, make their judgments over the one to whom he was betrothed as Joseph goes on with the rest of his life.

What stops him from doing what would have been reasonable in the face of what seemed untrue? Joseph loves Mary and he knows that Mary is in love with him. That’s why they were betrothed . . . So what now that Mary is pregnant? How does Joseph react to this news? It’s hard for us to imagine, I’m sure, but perhaps Joseph was afraid Mary cheated on him? Or maybe Joseph just didn’t understand what Mary was saying . . . it’s hard to imagine any of us having an immediate understanding after hearing such a story ourselves were we the first recipients of it. What average guy who’s a virgin, righteous or otherwise is going to begin to understand that his betrothed is pregnant by the Holy Spirit?

We can’t read Joseph’s mind at the time, but we can read his heart . . . Most likely it was a broken heart that didn’t know how to reconcile this tale with the plans, dreams, hopes that he and Mary had imagined together. Joseph as a righteous man can’t see clear to allowing Mary, already pregnant, to enter his house without shame . . . and so with one, little, three-lettered word – the word Yet – we see what Joseph’s plan is. Yes, Joseph was a righteous man who by his rights had every REASON to demand justice, to demand a REASONABLE explanation, who had a REASON to make a public scene, YET unwilling to expose her to shame [he] decided to divorce her quietly… Joseph has found a compromise that was still righteous and just – but would leave him broken hearted.

So if we’re looking for a reason, it’s something that goes beyond logic, something that goes against what is expected. The reason Joseph was doing all this was Love… Love for Mary yes… but what isn’t immediately evident, but no doubt active in this love story is Joseph’s love for this mysterious God who he had believed and trusted in who was now intervening in their lives in an unprecedented, unexpected way. The Love story doesn’t end there though.

St. Matthew, could have continued with another “Yet” – Yet, God was unwilling to let Joseph move on through life with a broken heart. God the Father sends an angel to Joseph in his sleep, and invites Joseph to let go of the hurt he felt as he went to bed with his shattered dreams and instead invites him to dream God’s dream. Joseph will not have any biological children of his own, but, if he chooses, God the Father invites him to dream his dream of being a Father to his Son in a spiritual and real way while maintaining his virginity, just as God is our Father in a spiritual, real and not-physical way. Joseph and Mary’s plans to move from a being betrothed to living together in the traditional way aren’t going to be able to happen… But God the Father invites them to Dream God’s dream of Joseph taking Mary into his home, to love, honor, cherish, and protect her all the days of his life; an even more important task for Joseph now that this child– for whom God had even bigger dreams for — was to be born.

The human drama, the love story isn’t simply about two random people, an unsuspecting couple who had their lives interrupted, disturbed, thrown by some heavenly buttinskys. Because we realize that the love story involves Mary and Joseph loving God the Father. It’s only their love for God that makes it possible for them to believe those words, “Do not be afraid” as their plans are fading away in the wake of this amazingly inconceivable plan being proposed. Their love of God gives them an openness to find new ways to dream.

For us, while wars continue to rage; with seemingly unexplained acts of tragedy befalling people from natural disasters to sickness and deaths; with the evils we perpetrate on one another, whether it’s nation against nation, neighbor against neighbor, or relative against relative, — all of those realities confirm cold, hard, facts that are sad, but true. And it is from those realities that people can easily write off Christmas and God Himself as a Myth that is unreasonable in the face of those cold, hard, facts that can be verified and determined as sad but “reasonable.”

Yet, 2,000 plus years later, this Christmas, we’re invited to look beyond those realities. To once again, dream God the Father’s what seems to us to be inconceivable, far-fetched dreams. To announce once again the good news of great joy to all people that the Emmanuel, God-is-with-us, has come. To give birth once again to the Messiah, the Christ Child to a world that even though it has been enlightened by his presence, seems to slip back into its darker corners. To do that by daring to live the eternal truths of forgiveness; selfless, sacrificial love; and peace that Jesus Christ personified.

If we believe in the truths this night contains, then the hope that has brought light into the darkness of countless generations before us starts to brighten once again in our own lives, and all those we come in contact with. Then our atheist friends may understand that in this season, we do indeed ‘celebrate reason’ – the reason we’re here tonight, the reason Christ came to earth, the reason of Christmas itself – the eternal love of God for each and every one of us.