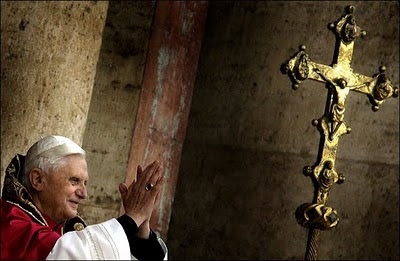 Hi everyone! Thanks for reading my homily for the FIRST SUNDAY OF ADVENT – NOVEMBER 28, 2010. The scriptures for today can be found at http://www.usccb.org/nab/112810.shtml. Appreciate all your feedback and comments! God Bless and Happy Advent! Father Jim

Who knew this many people, especially in the media, were interested in anything that the Holy Father has to say. Not that what he has to say isn’t important… when the Pope speaks, people should listen. But for the most part, the Pope’s teachings, interviews rarely command worldwide attention. Yet the reaction to interviews that he gave to an author for an upcoming book, well you would think that the Pope was announcing the day, the hour that Jesus was returning to issue his final judgment. Even that type of news I have a feeling would end up inside the newspaper, next to a Macys Ad for the Christmas sales. That might not be considered as important to most editors as the headline “Pope OK’s condoms in certain instances.”

While ordinarily, we would welcome such interest from the press in a Church teaching from the Holy Father, sadly, they got the story wrong. The headline was misleading. They took details out of context. They took days of interviews and pages of a book and watered it down to a sound-bite that our culture seems to prefer rather than actually reading, reflecting and understanding the complex theological issue the Pope was discussing in this interview. Which isn’t surprising and explains why the Pope teaching on a moral issue wound up on the front page. The mis-reporting, the confusion that’s ensued since shows how the media, and how often so many of us don’t get it or don’t want to get it. We probably shouldn’t be surprised…Here we have major press organizations who laugh at, deride, and disagree with the Church’s teaching that comes from scripture and natural law that sexual relationships only belong in a relationship of a married man and woman. They don’t seem interested in what the Pope says, what the Church teaches on a regular basis… Yet they seem obsessed by pushing this condom story which seems designed to discredit the Pope and the teaching authority that Christ has given him. The sad thing is how badly they miss the importance of what the Pope is teaching.

The Pope was trying to use an example that in this certain instance, people who were deeply entrenched in a life of sin, like abusing sex in prostitution, that an individual might recognize their behavior is dangerous to the physical health of themselves and their partner that they decided to use a condom – that could be seen as a good thing because it shows there’s some concern, there’s on some level a conscience that wants to protect the other and not have the evil of a disease spread. In this example, the person makes a small, but significant change where they care about someone other than themselves… They realize the world doesn’t simply revolve around their own desires, their own interests. And so this could be a sign of hope that perhaps this person will be open to becoming morally responsible. That the Holy Spirit could use this opportunity and they would begin growing in their relationship with the Lord and seeing the life of sin they are participating in as less desirable than the life that God is calling all of us to.

Yet some in the press continued with the initial sound-bite, “Pope OK’s condoms in certain instances” – continuing to mislead and confuse people. And when you think about it, who do they hope to mislead and confuse? If I had to guess, it would be those people who struggle with the Church’s teaching on contraception in general or on sexual matters altogether. Because quite simply, those who don’t listen to the Church on a regular basis, who mock the Church’s teachings, blame the Holy Father for so many evils that come from some reckless sexual behavior… since they’ve already decided that’s what the Pope, the Church is about – they wouldn’t care to properly report what he said… so why report the story in the first place? Even when the mistaken reports were attempted to be clarified, some ignored those clarifications, while some spun the story different. They used headlines like “Pope walks back comments on condoms.”

That so many like to treat this like a political thing where the Pope is being treated as a political figure – complete with graphics and polls telling us that “blah-blah” percent personally approve of the Pope but only “blah blah” percent agree with Church’s teaching shows how so many don’t get it or don’t want to get it. The Pope’s not playing to his “political party.” The Church isn’t trying to win new fans by telling people what they want to hear. The Church teaches what the world needs to hear. In the Gospel last week, we heard that Jesus Christ our King is willing to be put on a cross and die for all that he believed and teached… He died for us and our sins, so much does our King desire us.

With the beginning of Advent and this Gospel reading we just heard, the question gets turned around. How much do we desire Him? How much do we want to be aligned with him? These scriptures which start this season of Advent remind us that we’re waiting for Jesus to come back at the end of time. The thought is enough to jar us out of the Thanksgiving Turkey-tryptophan induced slumbers we might still be in. Knowing that Jesus’ will return to issue a final judgment on humanity is kind of a buzz kill to the “Christmas season” frenzy now in full effect.

The Gospel and the Church offering this reading isn’t meant to frighten us. But it is meant to tell us that we need to take what Jesus says, what His Church says much more seriously than a journalist or some opinion writer will tell you we should. In today’s reading Jesus referred to the days of Noah. As the flood waters start to fall, people were so self-centered, self-focused, they didn’t even notice or care to notice “oh it’s raining… been raining a lot… for A LONG TIME… hmmm.” Things haven’t changed much, the world still seems incredibly self-centered, and it’s amazing how easily we can fall into that and become self-focused too. We still have to deal with sin in our lives that so often wants to distract us from seeing, wanting, desiring Jesus Christ.

But the difference is that in the “flood waters” of today, the Church is meant to be our life-preserver. Jesus gave that to us as His gift so that until the end of time, we could hear His voice speaking to our present day world renewing God’s call to walk with Him today. Because His return is coming when we least expect it… This Gospel to start the season of Advent reminds us that we are to live as people constantly watching, and ready for Him to come. To come to us here and now… and to return to us at the end of time. The Church is here to constantly bear witness to the great mystery of faith that Christ Has Died, Christ is Risen and Christ will come again.

That’s something we should consider – that perhaps we would be better served by getting our moral teachings from the Church itself that cares about those realities than from a media cares and is more focused on itself.