Latest News
Home /Blog/“HATING ON JESUS AND HIS CHURCH” 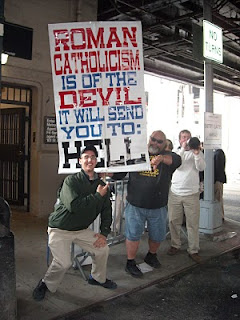 Hi everyone, here is my homily for the 32nd SUNDAY IN ORDINARY TIME – November 7, 2010, and also the closing of our “HOLY HALL OF FAME RETREAT” – which was a student written/led retreat on the saints and the call to Sainthood. The readings for today’s Mass can be found at http://www.usccb.org/nab/110710.shtml . Thanks as always for reading and your feedback! Fr. Jim

A few years ago, Pope Benedict XVI came to the United States for a Papal Visit. Considering that the Holy Father is 83 years old, and this was his first visit, the reality that he might not make it back over here was an unspoken, but understood reality, so it was a pretty exciting time for the different cities he was visiting. One of his visits was to New York where he celebrated Mass at St. Patrick’s Cathedral and then an open-air Mass in Yankee Stadium before over 55,000 Catholics. Thanks to Archbishop Myers, our student leaders (aka Eboard) that year, Mary our office manager and I got to attend the Mass which was truly a historic day – lots of incredible memories cemented in my mind.

One of those memories though, happened outside of the stadium, after the Mass. I was a little anxious to get back to the bus ASAP because we still had Mass at 8:30 that evening back here on campus, and with security ramped up and NYC traffic, they warned us that it might be several hours to make it out (when at its best, the trip is 25 minutes… at least the way I drive that’s how long it takes) anyway, so I was worried about not making it back in time. So I wasn’t quite paying attention to our Eboard members as we were leaving the stadium to get to the bus, (foolishly) assuming that since they knew I was in a hurry they would be right behind me.

So Veronica (who’s still here, now as a Senior) and Matt Higgins (who was a Senior and now is our campus minister) myself, Stephanie Haupin who was a senior and Matt Boyle who graduated last May (and was a Sophomore then) were walking to our buses and talking about what we had just experienced. A few moments after we got out of the stadium, had crossed river avenue, I realized that the two Matt’s weren’t with us.

You see before we had even gotten into the stadium, we had to stand outside for hours for security. And as we were lined up to get in, we had seen a bunch of protestors who all had awful signs. Really mean signs. You had atheists protesting with signs saying “Pope go home” (not really original). You had some others who were, well, there’s just no other word for it but ridiculous… individuals who were saying that Catholics are not Christian (just a quick read of history folks and you’d realize that if you’re Protestant, than you PROTESTED something that was there) Anyway, Matt Boyle and I had seen them before Mass and he had asked me “What’s up with that?” I’m sure I didn’t give a great explanation to all of it. But I know that I said to him I thought it was more important to focus on this historic visit by the successor to St. Peter, the Vicar of Christ, the Holy Father rather than deal with all that.

So when I had realized that the two Matt’s weren’t with me I got nervous for a second when Vern just nodded and said “take a look over there.” And when I did, there was a scene that made me kind of laugh and be afraid at the same moment. There was Boyle posing for a picture with a guy who had been out there probably 8 hours with a bull horn and shouting anti-Catholic stuff as he was holding a sign saying ROMAN CATHOLICISM IS OF THE DEVIL IT WILL SEND YOU TO HELL. So here’s Matt Boyle squating there with this giant smile and a thumbs up as the guy holding the sign is standing there with a thumbs down…oh and the other Matt, the “responsible” one is taking the picture. An NYPD cop who sees this and then sees me staring at the scene, kind of frozen not knowing what to do says “FATHER – DO SOMETHING ABOUT THIS” to which I responded “Does it look like I have any control over them?”

When we were talking about the whole thing on the bus ride home, I know Matt well enough to know that part of it is just his goofiness and wanting to have this picture (which I still have hanging up on my wall, by the way– NOT THAT IM ENDORSING WHAT HE DID but it is kind of funny) – but there was another part of him that I think hoped, maybe, just maybe if he stopped, shook this guy’s hand, asked to take a picture with him, goofed with him a bit, maybe he wouldn’t be so blind to the beautiful thing, the holy thing that was taking place inside the stadium. Matt seemed surprised that all these different groups of people who really have little if anything in common – like Atheists and Christians who don’t think Catholics are Christian could be that brought together over anything, and even more sadly what brought them together was their blind anger over the Pope… they were united in their irrational hatred of the Church. Yet, Matt, nor any of us shouldn’t be so surprised… It’s actually not really so original. That’s kind of what’s happening in tonight’s Gospel.

Yet, they were able to unite together on one thing… their hatred of Jesus.

To continue to use an example from our retreat over the weekend. The Pharisees would be like the Red Sox; The Saducees would be the Mets. Jesus is the Yankees. As much as the Mets and the Red Sox hate each other, they hate the Yankees more… Sad thing is, it’s not a joke. As much as they couldn’t stand each other. Because the Pharisees weren’t able to discredit Jesus… and because Jesus keeps calling them out, pointing out the religious burdens they’re putting on people while not helping to relieve those burdens… they turn to their rivals, the Saducees for help. Here’s another irony for you, one of the things that the Pharisees and Saducees disagreed about was whether there was eternal life or not. The Pharisees did – the Saducees didn’t. So the Pharisees kind of go “Hey Saducees… if you think you disagree with us, you should listen to what this Jesus is saying…”

Which is the whole scene in today’s Gospel. The Saducees are proposing this hypothetical scene to Jesus not because they were interested in what eternal life would be like, the eternal life Jesus was inviting them, the Pharisees and each one of us to experience. They’re simply too busy trying to discredit Jesus. They’ll ask another question, they’ll look for some other stumbling block, they’ll try to find another bone of contention rather than care to hear about that invitation Jesus is offering.

Yes, they unite in their closed-mindedness. They unite in their sinfulness…being able to turn their gripes with each other aside to unite in hatred for Jesus mostly because they didn’t want Him to change the balance of power they were already fighting over. Yet what the Pharisees who believe in eternal life miss… what the Saducees who didn’t believe in eternal life miss is that their united hatred is blinding them to Jesus as their only hope…. Their closed mindedness to what Jesus is proposing is an obstacle to the only opportunity that really matters. As we heard (over and over again in song this weekend) on our retreat – There’s a reason I’m alive for a blink of an eye.

That reason is not to get wrapped up in our worlds, our concepts of what things should be But rather to be open to what the Holy Spirit is calling and prodding us to do… to live not a good life, but a GREAT life which is only the slightest glimpse of the eternal life Jesus is promising us. The eternal life he wants us to experience and to lead others to. The call to sainthood for each of us, our admiration of those already who are already canonized Saints, members of the “Holy Hall of Fame” is a call to unite us in love for God the Father, His Son Jesus Christ and His Holy Spirit. Who will we unite ourselves with?

Will we be like those atheists and “Christian/Anti-Catholics” on a street corner who are blind to the irony that they are united on anything? Will we be like the Pharisees and Saduecees who couldn’t stand each other but hated Jesus more? More specifically Can we be that easily misled to even align with such destructive forces within us and not even realize it simply because we find others who agree with us on our own self-centered thoughts and actions? It’s amazing what types of alliances can be formed when that becomes our driving force.

Or will we unite with those who have been challenged, continue to be challenged and always will be challenged by the Gospel of Jesus Christ. Challenged to unite in His Love and to live radical lives centered not on ourselves but on Him, just as the Saints have done through the centuries. The choice is ours Will we embrace every moment we’ve been given, knowing there’s a reason we’re alive for a blink of an eye?