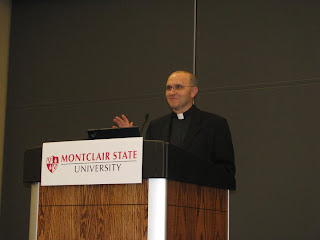 On Wednesday, October 13th, the NEWMAN CATHOLIC CAMPUS MINISTRY at MONTCLAIR STATE UNIVERSITY sponsored THE FIRST ANNUAL ARCHBISHOP JOHN J MYERS LECTURE SERIES where we welcomed Father Vincent Lampert, an Official Exorcist for the Archdiocese of Indianapolis and one of less than 2 dozen priests who’ve been trained and given faculties to serve in this role in the United States.

We’ve received numerous requests for MP3s of the talk, which were recorded that evening. I’m hoping that (soon) we will be able to have a better way of uploading this on our website… but for now, here are three links where you can download the 2 hour presentation which is Father Lampert’s presentation and the Q & A for the evening. The three links break the talk into 40 minute pieces: 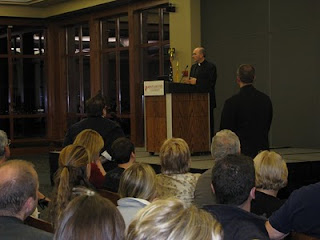 Once again, we appreciate the incredible interest this entire event generated. Members of the media from 2 of the 5 Metro NYC stations were present as well as members of the press from the Star Ledger & The Bergen Record.

We appreciate also the support of our benefactors and friends for making this and other events possible. If you wish to be one of them, please make donations out to Newman Catholic Campus Ministry – 894 Valley Road, Montclair, NJ 07043

Here’s a recap of the evening from an upcoming article in the Archdiocese of Newark Newspaper “The Catholic Advocate”:

Demonic spirits and the occult have been popular Hollywood plot devices for years, but on Oct. 13, over 650 people got to hear first-hand what battling the occult is really like.

Fr. Vincent Lampert, one of 24 exorcists who have been trained at the Vatican and authorized to serve in the United States, spoke at Montclair State University as part of the First Annual Archbishop John. J. Myers Lecture Series, hosted by the Newman Catholic Campus Ministry.

Lampert, the official exorcist of the Archdiocese of Indianapolis, relayed his own experiences as well as answered questions from audience members. Lampert said that genuine demon possession is extremely rare. Counseling, he said, is usually what the person needed, adding that his job is not to convince people they are possessed. “I want to help individuals get the help they need, not the help they think they want” Lampert said.

According to the Church, signs of demonic possession include speaking in unknown languages, showing unnatural strength, and a vehement disdain toward Christ, the cross and other holy items.

Lampert said that demonic possession can take place due to a person having ties to the occult (practicing white or black magic, holding seances, ouija boards, etc), having a dedication to Satan, or a hardened life of sin. Lampert also debunked fictitious portrayals of exorcisms pointing out, for example, that unlike portrayed in movies, exorcisms are only done on sacred ground, most of the time being a church rather than in a possessed person’s home.

Lampert was ordained a priest in June 1991, but started down the road to becoming an exorcist in 2005 at the request of his Archbishop. He trained in Rome and observed numerous exorcisms first-hand before being authorized to perform the rite.

Newman Catholic Student President, Kate Ascolese, a junior at MSU explained the decision to name the series after Archbishop Myers in her introductory remarks: “Over the last 50 years the Archdiocese has sponsored our ministry here at Montclair State and in recent years, under Archbishop Myers’ guidance we have seen the commitment and mission renewed in a dramatic way. In appreciation for the Archbishops leadership, support and encouragement to preach the Gospel of Jesus Christ and to love the Catholic Church that Christ has founded, we name this lecture series after him.” 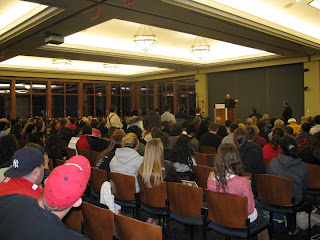 Father Jim Chern, Chaplain and Director invited Fr. Lampert to be the inaugural speaker after learning that Lampert conducted a similar lecture for students at the University of Illinois in Champaign. “Their Catholic chaplain, Msgr. Greg Ketcham spoke about one of their most popular events was when they invited an exorcist to speak to their students about the reality of evil and his experiences as an exorcist. The event was so popular that a crowd of over 1,000 students filled their auditorium,” Chern said. “After seeing the numbers who attended here at MSU, it’s obvious this isn’t just a mid-west phenomenon.”

Recognizing that the depictions of Hollywood would play into the marketing of the lecture, Chern added “I was hoping the curiosity might work to our benefit, in getting students to be intrigued by thinking ‘did that stuff in that movie really happen?’ to provoke them to go deeper and think about the choices they are confronted with every day,” Chern said. “In light of recent tragedies that have happened at Seton Hall and Rutgers, I think it’s important for students to reflect on how the choices we make, the words of hatred we speak and evil actions we commit can cause tragic, disastrous things to happen.”