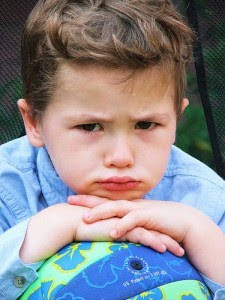 Hi everyone – here’s my homily for the 21st SUNDAY IN ORDINARY TIME – AUGUST 22, 2010. The readings can be found at http://www.usccb.org/nab/082210.shtml. Thanks as always for stopping by to read and all your comments and feedback. This past month I’ve been amazed at the number of visitors and where you’re all coming from. Just curious, how are you finding this blog? Fr. Jim

A few weeks ago my oldest brother was disciplining his daughter, my 4 year old niece. I’m not sure what the infraction was – she either did something she wasn’t supposed to do or didn’t do something that she was. But he had taken her aside, knelt down so that he could talk to her face to face… and right in the middle of his “correction” of her, practically mid-sentence he stopped talking, got up, walked into the other room where his wife was and he just started laughing. When his wife asked him what was going on, he said “She just gave me the look I used to give my mother and father when I was growing up and they’d be yelling at me about something.” When they told my mother this story, without missing a beat she said “I know EXACTLY what look he’s talking about” (and something about her being glad that he was getting a taste of what she had to deal with)

You have to wonder how that happens? I mean it’s not like someone coached her or told her before he pulled her aside to do this. But somehow this 4 years old knew the exact look; got the mannerisms down, knew the exact moment to give it – well it is an interesting thing to watch. It tells us how much kids pick up, doesn’t it? Here it is, after four years of listening to him, watching him, parroting him, quite naturally she simply reflects in this minor but interesting way that she is truly his daughter and he is truly her father.

How well do we reflect that we are truly God’s son’s and daughters and that He is our father? That’s one of the important questions that today’s Gospel leaves us with. We hear this important question asked by some random person as Jesus is on his way to Jerusalem. They want to know“Lord will only a few people be saved?” In that question contains a lot of other questions – Who’s in and who’s out? How do we make sure we’re on the “good” list – the “saved” list and avoid the other one.

Jesus’ gives this analogy. Where heaven is portrayed as a house, and God is the master of that house. As people knock on the door – people who knew or know God aren’t recognized by him and are turned away. This point says that salvation is more than just knowing who Jesus is – being baptized, fulfilling the basic obligations that have been given. We are told to “strive to enter the narrow gate” which is Jesus himself…

And how do we do that? By developing our personal, intimate relationship with Jesus. Jesus isn’t looking for us to simply get his mannerisms down, but rather to make his attitude ours. He doesn’t want us to imitate his expressions, but rather to make our hearts imitate his heart. That happens not instantly, not after one Mass, but after a lifetime of listening to him, looking at him, even parroting him- we find that kind of naturally we simply start to reflect Jesus Christ. He is more than just someone we follow, he becomes our brother. We’re not being coached, we’re not being prompted, we simply reflect that we are truly God’s son’s and daughters and that He is truly our Father.